Viticulture: the most awesome garden tool ever and more fire 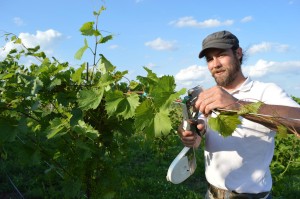 I can’t believe I’ve never seen a “Tapener” before now.

At our most recent viticulture class at Kirkwood Community College in Cedar Rapids, we used this handy tool to position young grapevines onto trellis wires. A combination staple gun/tape dispenser, the Tapener is ingenious, and as long as it doesn’t get jammed, is fairly simple to use. 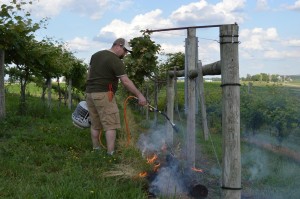 A propane torch can be used as an organic method of weed control in the vineyard, as shown at Kirkwood Community College in June 2013. (photo/Cindy Hadish)

Just pull up a vine onto the wire, open the jaws of the Tapener to draw out the tape, encircle the vine, press the device to staple and voila! An instant tie to support the plant. Besides grapevines, I can envision a multitude of uses for gardeners, including on clematis vines and tomatoes, and it would likely be a good substitute for duct tape for general home repair.

Tapeners can be purchased for around $45, in case anyone was wondering what to get me, or your favorite gardener, for any upcoming holiday. Remember, that great gift-giving day of the Fourth of July is this week. 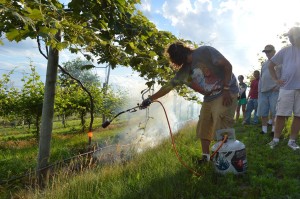 Students in the Kirkwood Community College viticulture class watch as a classmate uses a propane torch for weed control in the vineyard in June 2013. (photo/Cindy Hadish)

Our class also had another chance to use a propane torch, for purposes of weed control along with that general coolness factor. I mentioned the flame thrower previously, but this time, had my camera along to capture it in action.

Because of the holiday, we have a bit of a break before our next class, and with all of the rain Iowa has been receiving, imagine the look of the vineyard will have changed considerably in that time.