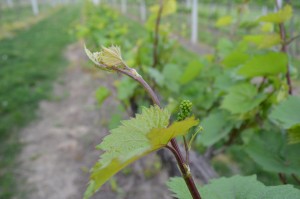 The past two weeks have been busy ones for the Vineyard Management class at the Kirkwood Vineyard in Cedar Rapids. We’ve planted more than 30 grapevines, learned to string trellis wire, attached grow tubes to the new vines and tonight, had our chance to play with fire.

Holes about 3-feet-deep were dug with an auger to plant the one-plus-year-old vines, which need the space for their extensive root system. The vines are placed against one side of the hole, which is filled in with compost and packed down so the plant doesn’t shift. 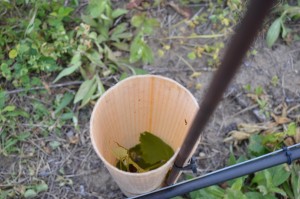 Grow tubes, basically plastic tubes attached to metal rods, are used to protect the vines from deer and other critters, as well as herbicide sprays. They should be removed in August so the plants can harden off for winter.

Stringing trellis wire definitely required teamwork, with wire spaced across at 2 1/2 feet and then 1-foot intervals higher to brace, train and contain the vines as they grow. 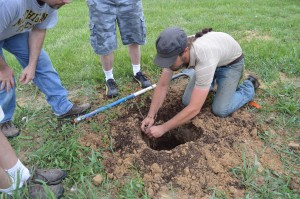 With ample rain, the vineyard has gone from bare to bursting with green foliage and grape flower clusters in a matter of weeks. The weeds, though, are just as vigorous. Most vineyards spray chemical herbicides, such as Roundup and Rely, but some organic vineyards may choose the propane torch method.

A fellow classmate brought his torch tonight and our instructor remarked that by using flame as a weed control, he doesn’t have to worry about invisible “drift” from herbicide sprays affecting the vines. We tested one full row of Niagara vines with the torch, turning dandelions and other weeds into charred strips. The whole system, with a 30-pound propane tank, cost less than $50. And it was just plain fun to use. Of course, as one classmate remarked, you wouldn’t want to be using the flames during late August. With rain falling intermittently, before and after class though, it seemed safe enough. We’ll be able to see how this organic method of weed control compares to the chemically treated weeds next week.

The rain prompted me to leave my camera out of the vineyard tonight, but this link shows the type of propane torch we used.