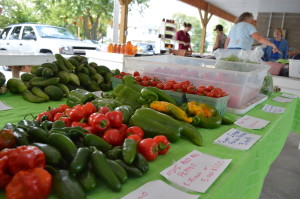 The MOSES organic farming conference begins Feb. 27, 2014, with one group calling on organizers to cancel an appearance by a large agribusiness employee. (photo/Cindy Hadish)

Corporate agribusiness shouldn’t merit a seat at the table of the largest organic farming conferences in America, according to one group.

As the MOSES organic farming conference gets underway Thursday, Feb. 27, 2014, The Cornucopia Institute is crying foul over the scheduled appearance of an employee of WhiteWave, the former branded products division of Dean Foods.

Cornucopia notes that the massive dairy conglomerate has long been accused by conventional and organic dairy producers alike of manipulating the market at the expense of family-scale farmers.

Here is more about the issue from Cornucopia:

Regardless of the weather, the heat has been turned up at the La Crosse Center, which will host the largest organic farming conference in the United States, starting February 27. A prominent organic industry watchdog, The Cornucopia Institute, has called on event sponsors to cancel an appearance by an employee of one of the largest corporate agribusinesses involved in organics, WhiteWave, calling them an unethical “perennial bad actor” in the organic marketplace.

The MOSES organic farming conference, sponsored by the Midwest Organic and Sustainable Education Service, a nonprofit headquartered in Spring Valley, Wisconsin, typically draws over 3,000 industry participants for a three-day event. One of its many workshops this year will be conducted by WhiteWave’s Suzanne Kevlyn, a market research expert, who will purportedly help farmers understand “consumer demographics, behaviors, attitudes, and mindsets.”

“Here is a representative of an agribusiness with a history of dropping Midwest organic soybean producers and switching purchases to China, illegally cutting off dairy farmers when there were organic milk surpluses, and switching Silk plant-based beverages, formally an all-organic brand, to 94% conventional products,” stated Mark A. Kastel, Senior Farm Policy Analyst at Cornucopia. “What are they going to teach organic farmers, how to expand profits by betraying the values that this industry was founded upon?”

WhiteWave, recently spun-off in an IPO on Wall Street, was the former branded products division of Dean Foods, the massive dairy conglomerate that has long been accused by conventional and organic dairy producers alike of manipulating the market at the expense of family-scale farmers. They have been the subject of federal antitrust investigations and have settled multimillion-dollar lawsuits with farmers.

WhiteWave received renewed criticism this month when Cornucopia learned, from current and former employees, that its Horizon “factory farm,” long operated in Idaho, was allegedly skirting the legal requirements that mandate organic cattle have access to pasture.

“This is a company that appears to be flouting the rules and has historically placed family-scale farmers here in the Upper Midwest at a competitive disadvantage by relying on giant CAFOs for milk production for their Horizon brand,” said Kastel. “This is the last outfit that should be presenting at the nation’s most prestigious organic conference.”

This is not the first time dairies associated with the Horizon brand have been under regulatory scrutiny.  A prior legal complaint filed by Cornucopia resulted in the subsequent organic decertification of a 10,000-cow dairy in California.

WhiteWave has also recently been blasted for rolling out a new line of Horizon packaged macaroni dinners that are produced with synthetics and non-organic ingredients.

“Horizon is not only the largest dairy label, it is the largest label, by dollar, in the entire organic industry,” added Will Fantle, Cornucopia’s research director. “It is unconscionable for this company to launch products, with almost identical packaging and labeling, that are not certified organic. This appears to be a crass attempt to profiteer at the expense of consumer confidence in organics.”

The Cornucopia Institute said it was heartened by the respectful and serious response it received from the MOSES board of directors in response to a communication asking the conference sponsor to cancel the WhiteWave-led marketing workshop.

“Although the MOSES board shares concerns about the ethical conduct of some of the larger corporations that have invested in organics, they have postponed addressing this issue until their April board meeting,” said Helen Kees, a third-generation farmer and organic produce and livestock producer, from Durand, WI and Cornucopia’s board vice president. She has frequently attended and has been a speaker at the MOSES conference in the past.

Kees continued, “We are encouraging attendees at this year’s conference to boycott this one particular workshop and send a strong message to the MOSES leadership that, ‘we love your organization and this conference but implore you to set a high ethical standard for who you allow to potentially influence our community.'”

Dean Foods and WhiteWave have long been a financial sponsor of the MOSES event and have had numerous speaking opportunities in the past, including a keynote by a well-known web-pediatrician, Dr. Alan Greene.

Greene, who has worked for a number of agribusinesses and Big Pharma as a paid spokesman and public relations agent, was under contract with Dean/Horizon at the time of his speech although that affiliation was not shared with the audience.

Greene was later the center of controversy when he testified in front of the USDA’s National Organic Standards Board, in favor of a proposal pushed by Dean Foods and Martek Biosciences to add a controversial genetically mutated, algae-based nutritional oil for use in organic food.

“Companies like Dean and WhiteWave, that do billions of dollars’ worth of business, can ‘buy influence’ in the organic community the same way their lobbyists buy influence in Washington with large campaign contributions,” Kastel added.

It’s been estimated that Dean Foods/WhiteWave, over the last 10 years, has been the largest corporate contributor to organic nonprofits, either directly or by laundering their money through Farm Aid, where Silk and Horizon brands had long been marquee sponsors of their concert.

“MOSES has been an important part of Wisconsin and the Upper Midwest becoming ‘Ground Zero’ in the burgeoning organic movement,” Kees said. “They deserve our respect and admiration.”

“We know their board and leadership. They are respected in our community and I’m sure they will take appropriate corrective action to make sure that large and powerful organizations don’t use their conference for ‘greenwashing’ of less than ethical activities,” Kees affirmed.