Water worries: Upcoming river discussions and state of the fish in Iowa 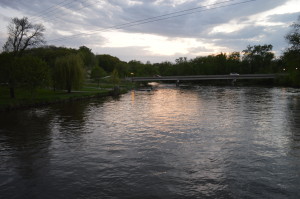 Waters of the Wapsipinicon River flow freely during warmer days last fall. Water that has remained frozen in Iowa’s lakes for longer than normal will likely contribute to fish kills, according to the DNR. (photo/Cindy Hadish)

This seemingly never-ending winter will likely take another toll, this one on Iowa’s fish.

A news release today from the Iowa Department of Natural Resources notes that some of Iowa’s lakes have been under ice for three and a half months, which correlates to low oxygen levels that contribute to fish kills.

“Can we eat the fish?” is one of the discussion topics during a session Saturday, March 22 in Iowa City, sponsored by Iowa River Friends. On the “warmer” side, “The big cats of Johnson County,” will also be discussed during the forum at the Johnson County Fairgrounds.

Here is more about Saturday’s event from Iowa River Friends. The full news release from the DNR follows.

IOWA CITY – “THE BIG CATS OF JOHNSON COUNTY” AND “CAN WE EAT THE FISH?” are two talks being offered the morning of Saturday, March 22nd, starting at 10:00 am in the Extension Building at the Johnson County Fairgrounds on Riverside Drive, Iowa City.  The talks are sponsored by Iowa River Friends and are open to the public free of charge.

Vince Evelsizer, the Furbearer Biologist for the Department of Natural Resources, will have current information about the wild felines roaming Johnson County.  Mary Skopec, water quality expert and teacher with the DNR will talk about the health of the Iowa River and its tributaries.  She will describe the kinds of fish that live in the Iowa River, and the fish that may return as the river returns to pristine condition.

Iowa River Friends is a voluntary, non-profit membership organization dedicated to the protection, improvement and enjoyment of the entire watershed of the Iowa River including its tributaries.  This program is one of the quarterly IRF presentations aimed at involving the people of the watershed in various aspects of its care and enjoyment.  For more information, check the website at www.iowariverfriends.org.

SPIRIT LAKE – With each passing day of ice cover, there is a growing likelihood that several Iowa lakes and ponds will experience some level of natural winter fish mortality

“We lose fish every year during the winter, but this has been a hard winter and we are expecting to see more lakes with some winter mortality, and a few lakes, like Minnewashta, are experiencing oxygen levels lower than typical,” said Jim Wahl, supervisor for fisheries in northwest Iowa.

Minnewashta, Upper Gar and the lower end of East Okoboji Lake have low oxygen levels and ice anglers reported seeing dead fish through their underwater cameras in Minnewashta. Other lakes with low oxygen levels are Eldred Sherwood in Hancock County, Clark Lake, in Cerro Gordo County, and Sabula and Spring lakes on the Mississippi River.

“Our lakes froze early and have been under ice in some areas for three and a half months. We are still finding 20 to 33 inches of ice so it will be around for some time. The last time we saw a winter like this was in 2008,” he said.

When lakes freeze early and receive a blanket of snow, it effectively shuts off the sunlight from reaching aquatic plants, which stops photosynthesis and the flow of oxygen into the water.  The longer the ice and snow cover the lake, the less oxygen is in the water and available to the fish. Wahl said low oxygen levels have been found in a variety of lakes, from the north to the south.

An additional factor in Lake Minnewashta could be the decomposition of a late season algae bloom that robbed additional oxygen from the water compounding the early ice, snow cover factor.

The DNR has taken steps to prevent winter fish kills from low oxygen by placing aeration systems at a few lakes with a history of winter kills.  Aeration systems keep a section of the lake from freezing allowing some oxygen into the water but does not guarantee a lake won’t winterkill during extreme winters.

Wahl said even during the most severe winter, a complete kill is seldom observed and fish populations rebound quickly.

“We expect some fish loss but we just won’t know the extent of it until we can get our survey boats on the water and sample lakes that had low winter oxygen readings,” Wahl said.