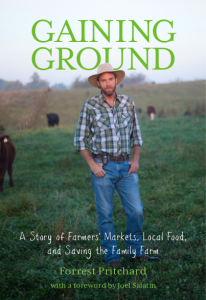 My sister just read Gaining Ground this week, finishing it with tears streaming down her face.  It’s no wonder, though I tend to more readily recall the book’s amusing passages from my reading of the memoir earlier this summer.

While we both identify with author Forrest Pritchard’s attempts to save the family farm, our emotional connections also point to the universal message in Gaining Ground: A story of Farmers’ Markets, Local Food, and Saving the Family Farm.

Pritchard writes about saving the land of his ancestors in Virginia, but the memoir’s theme resonates coast-to-coast.

“It’s intended to be a story about all family farms,” Pritchard, 39, said during a phone interview from his home, Smith Meadows, where he raises grass-fed beef, free-range chickens and more.

In the book, Pritchard notes that nearly every type of livestock the family raised manages to escape from a variety of pens and pasture, including a flock of skittish sheep.

“They were so reliably jittery, ready to flee at the first sign of human interaction, that I suspected they pounded double shots of espresso each morning behind the barn,” Pritchard writes.

The most painful passages to compose involve his father’s failing health, said Pritchard, who noted he was unable to edit those sections through his tears.

You can read my full review of the book in the fall edition of Edible Iowa River Valley magazine.

Readers don’t have to be in the midst of saving their own family farms, as we are, to enjoy Gaining Ground. Pritchard has proven himself to be a skilled writer and I look forward to his next book.

Now, a plug for Edible Iowa River Valley… The magazine is available for free at various restaurants and other locations, but copies often go fast, so don’t miss out on any issue by subscribing for at-home delivery.