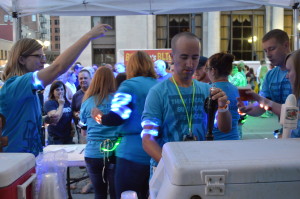 Beverage stands kept busy Saturday, Aug. 29, 2015, during Market After Dark, a celebration of the 10th anniversary of the Downtown Farmers Market in Cedar Rapids. (photo/Cindy Hadish)

It’s no wonder that some of the vendors were a bit overwhelmed at the first Market After Dark in Cedar Rapids.

Pam Hinman, communications manager for the Cedar Rapids Metro Economic Alliance, which hosts the markets, said a typical Saturday morning market attracts about 14,000 people. So, with 20,000 more people than a regular market, which sometimes feels overcrowded with 14,000 customers, it’s no wonder that some visitors called the night market “a zoo.”

The morning markets generally have about 200 vendors, while about 70 sold food and other items at Market After Dark. The night market, from 7:30 p.m. to midnight, was held to celebrate the tenth season of the Downtown Farmers Market.

While much has been said about long lines and crowds, many downtown business owners – who also saw a boon that night – regard it as a testament to the need for more of these events.

Perhaps we’ll see similar events in the future, or maybe a division between a more family-friendly night market and one geared toward adults. 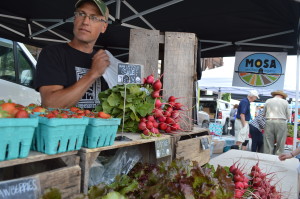 Organic radishes and other vegetables are sold by Grinnell Heritage Farm at the first Downtown Farmers Market of the season on Saturday, June 6, 2015, in Cedar Rapids, Iowa. (photo/Cindy Hadish)

Many other markets in Eastern Iowa continue operating into October. Find one in your area on the Homegrown list and see some of the sights from Market After Dark here.