Could Cedar Rapids be next in line for New Pi? 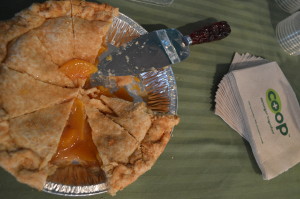 New Pioneer Food Co-op members voted to add “more pi” this summer. An announcement on the site search will be made Oct. 1, 2013, in Cedar Rapids. (photo/Cindy Hadish)

CEDAR RAPIDS – An announcement is coming tomorrow – Tuesday, Oct. 1 – about New Pioneer Food Co-op’s search for a new store location and given that the news will be released at the Cedar Rapids Metro Economic Alliance, odds look good for Cedar Rapids.

New Pioneer officials will provide an update on new store planning at the 11 a.m. event.

They note that in June, New Pioneer received an overwhelming “yes” vote from their members to pursue a third store in the Co-op’s current trade area – the area from which it currently draws strong customer support and sales, from east Iowa City through Coralville and north to Cedar Rapids and Marion – or, in the event that a viable downtown Iowa City site can be found, to relocate the Iowa City store within the immediate downtown area.

At that time, Hartz said New Pi had been aware of The Fresh Market’s expansion plans, but was still not in a position to announce anything publicly.

That appears to be changing with Tuesday’s announcement.

More background on New Pi: New Pioneer Cooperative Society was founded as a natural foods cooperative grocery in Iowa City in 1971, and opened its Coralville branch in 2001. Today, New Pi is a thriving two-store food co-op with over 29,000 members. The stores provide local, organic, and natural foods to the Iowa City and Coralville area and everyone is welcome to shop. New Pi is located at 22 S. Van Buren St. in Iowa City and at 1101 2nd St. in Coralville. Visit www.newpi.coop for more information.