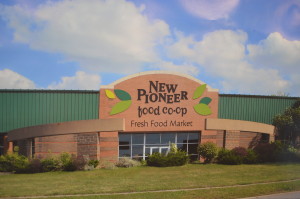 The Iowa City-based cooperative, which specializes in local and organic foods, announced today that its third store will open in Cedar Rapids in an existing building at 3338 Center Point Rd. NE

The site is the former Fin & Feather, which is closer in size to New Pi’s 10,000-square-foot Coralville store, than its longtime Iowa City site. The Cedar Rapids Assessor’s website shows the building, constructed in 1997, is 16,473 square feet. 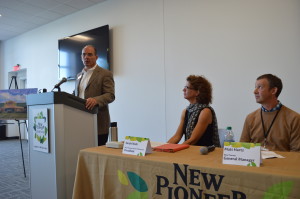 Hartz and other New Pi representatives noted that today’s announcement does not mean the board has given up on a new downtown Iowa City location for its other store, which is about half the size of Coralville’s store and in a flood plain.

The news conference comes just days after The Fresh Market, a North Carolina-based specialty grocery chain, announced its intentions to open its first Iowa location in Cedar Rapids. That store will be located in the site of the Kmart store on Collins Road NE.

Hartz said New Pi has been aware of The Fresh Market’s intentions to expand, but that will not impact the viability of New Pi’s new store in Cedar Rapids.

About 50 people will be hired to staff the Cedar Rapids store, Hartz said, with most hiring happening six months before the store opens.

More on this story, as well as The Fresh Market, will be in the next edition of the Corridor Business Journal.