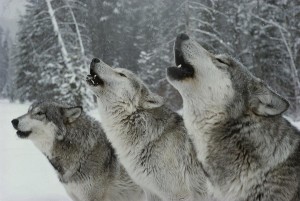 There are no breeding populations in Iowa, but the occasional gray wolf that strays into the state is now offered federal protection.

The U.S. Fish and Wildlife Service published its rule Friday, Feb. 20, 2015, on a decision by the U.S. District Court for the District of Columbia, which reinstated federal protections for wolves in the western Great Lakes region.

The court ruling continues the clash between ranchers, animal rights advocates and others that culminated in delisting from the federal endangered and threatened list just a few years ago.

Sightings of gray wolves have been confirmed in Iowa, including a female gray wolf shot and killed in Buchanan County and another shot and killed in Jones County, both in 2014. See the Iowa Department of Natural Resources Map of Iowa gray wolf sightings. Under the ruling, shooting or otherwise taking a wolf in Iowa is now illegal, unless a direct threat is posed.

The DNR encourages coyote hunters in Iowa to  review the differences that distinguish a wolf from a coyote. In general, wolves are larger and bulkier while coyotes are shorter, sleek and lighter on their feet, the DNR notes. More information and identification tips can be found at: www.iowadnr.gov/wolves.

For more on the court decision that vacated and set aside the 2011 delisting rule (The Humane Society of the United States, et al., v. Jewell) see:
www.federalregister.gov/agencies/fish-and-wildlife-service