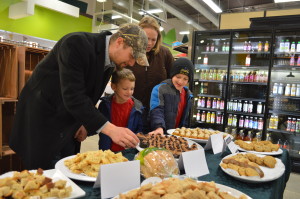 New Pioneer Food Co-op opened its new store in Cedar Rapids more than two months ago, but is still celebrating.

See photos from the store’s opening in December here and read on for today’s  announcement from New Pi:

New Pioneer Food Co-op is pleased to announce their Cedar Rapids Grand Opening Celebration on Saturday, March 7, from 2-4PM at New Pi Cedar Rapids, 3338 Center Point Road NE! The doors have been open for over two months, giving them time to settle in, and sign up over 1,200 new Co-op owners. Everyone is invited to join in the celebration!

The entrance (located on the east side) at New Pi Cedar Rapids, 3338 Center Point Rd. NE.

The party will feature live music by Pennies on the Rail, gift basket giveaways every 15 minutes, and dozens of local food producers sampling their local goods. There will also be a bicycle-powered smoothie blender, and a bacon sampling of New Pi’s signature house-cured and -smoked bacon!

Visitors will also have an opportunity to plant seeds with New Pi Soilmates (which provides free organic garden education and school garden support to schools throughout Linn & Johnson Counties).

There will be samples of signature house-made goods including New Pi’s famous cakes, smoked meats, and food prepared by New Pi Cedar Rapids store chefs Matt Steigerwald (previously owner and chef at Lincoln Café) and Shawn Price. The Grand Opening will kick off with an official ribbon cutting and welcome at 2PM.

Five $100 Shopping Sprees will be given away, which shoppers can enter with every shopping trip February 28 – March 7.

New Pioneer Cooperative Society was founded as a natural foods cooperative grocery in Iowa City in 1971, opened its Coralville branch in 2001, and opened a third store in Cedar Rapids in December of 2014. New Pi is a thriving food co-op with over 31,000 members-owners. The stores provide local, organic, and natural foods to the Corridor and everyone is welcome to shop – owner or not. New Pi is located at 22 S. Van Buren St. in Iowa City, at 1101 2nd St. in Coralville, and at 3338 Center Point Road NE in Cedar Rapids. Please visit www.newpi.coop for more information.