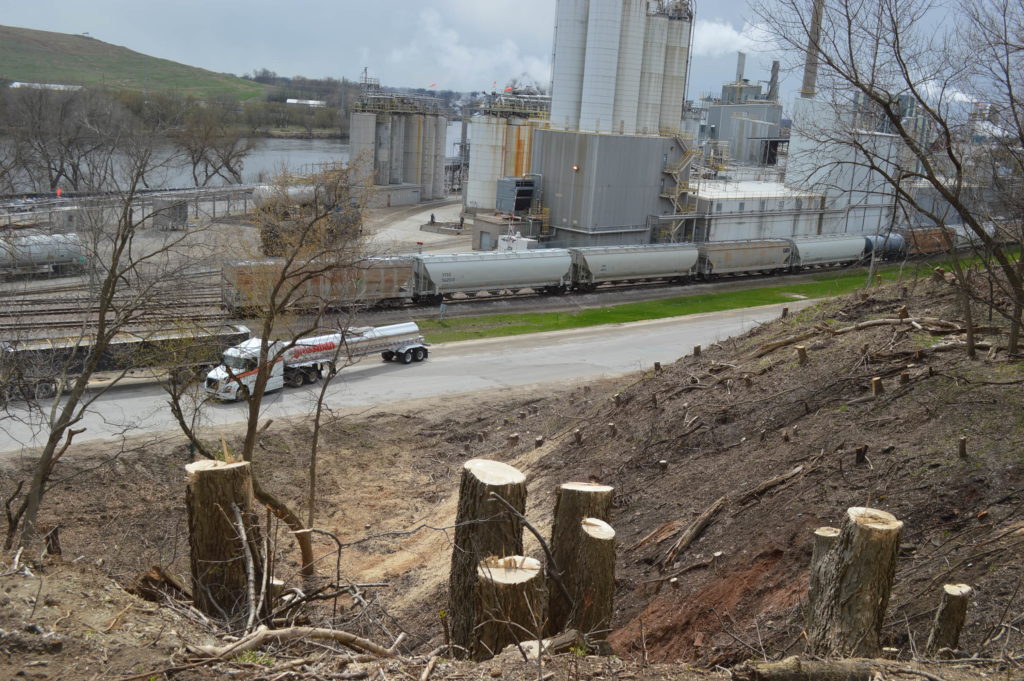 Stumps are left behind as the city clears trees on a hillside across from the Cargill plant in Cedar Rapids, Iowa. (photo/Cindy Hadish)

Due to the coronavirus pandemic, the world is marking the 50th anniversary of Earth Day somewhat in isolation, even as environmental challenges mount around the globe and close to home.

The first Earth Day was celebrated in 1970 to draw attention to environmental issues and advocate for clean air and clean water. This year, April 22, 2020, marks the 50th anniversary, with a call to raise awareness about the effects of climate change, minus the large-scale gatherings of years past.

A local celebration of Earth Day, EcoFest, was canceled due to the prohibition of gatherings during the pandemic. In the past month alone, Iowa has seen 90 deaths, and so far, 3,748 confirmed cases of COVID-19, the respiratory illness caused by the novel coronavirus. 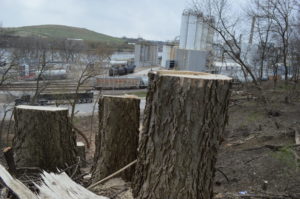 Various sizes and varieties of trees were removed near the Cargill plant. (photo/Cindy Hadish)

Even as attention is drawn to the value of trees on Earth Day and Arbor Day — celebrated April 24, 2020 — residents in southeast Cedar Rapids have noticed the clear-cutting of trees along Otis Road SE during the past month.

Already, neighbors nearby were rocked by the city agreeing to allow Cargill to construct an industrial railyard in their quiet residential neighborhood.

The city’s website states the following: “You may have witnessed tree removals recently taking place along Otis Road SE, across from Cargill. This work is associated with the City’s Flood Control System, in preparation for future levee construction with the U.S. Army Corps of Engineers.”

But City Arborist Todd Fagan said the trees, along Otis Road near 18th Street and 15th Avenue SE, are being cleared to correct erosion issues and facilitate repairs on a sanitary sewer in the area.

“The majority of trees were removed along the footprint of the future levee and the sewer needs to be repaired prior to its construction since the levee will pass over the sewer line,” Fagan wrote in an email. “Given the nature of levees and flood control, no replacement trees are planned for the area.” 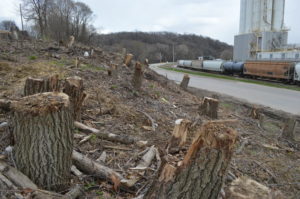 A train moves alongside the Cargill plant near the hillside where trees have been removed. (photo/Cindy Hadish)

Fagan noted phase two of the project will involve additional repairs and erosion mitigation for the sewer line, resulting in more tree removals further into the native area, with no designated timeline for the project.

“I would speculate that, again, no purposefully planted trees will be installed for that project, but volunteer trees will likely fill in at some point,” he wrote. “Future maintenance for the area may involve removal of these volunteer trees to protect the levee.”

This year, even as social distancing is encouraged, individuals can mark Earth Day on their own, and celebrate it every day, by picking up trash in their neighborhood, planting a tree, being conscientious about consumption and diligent about recycling and reusing items, rather than sending more to the landfill.

Hope for the future can be seen as students are more often leading the way in environmental initiatives, including strikes that call attention to climate change. 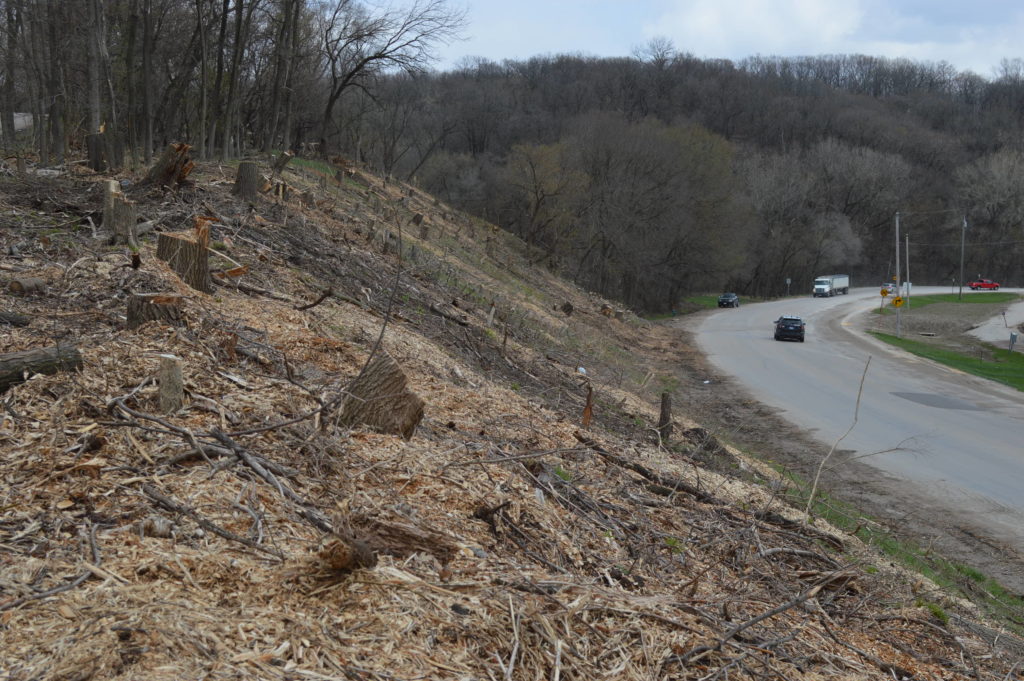 Trees have been clearcut on a hillside along Otis Road SE in Cedar Rapids, Iowa. (photo/Cindy Hadish)