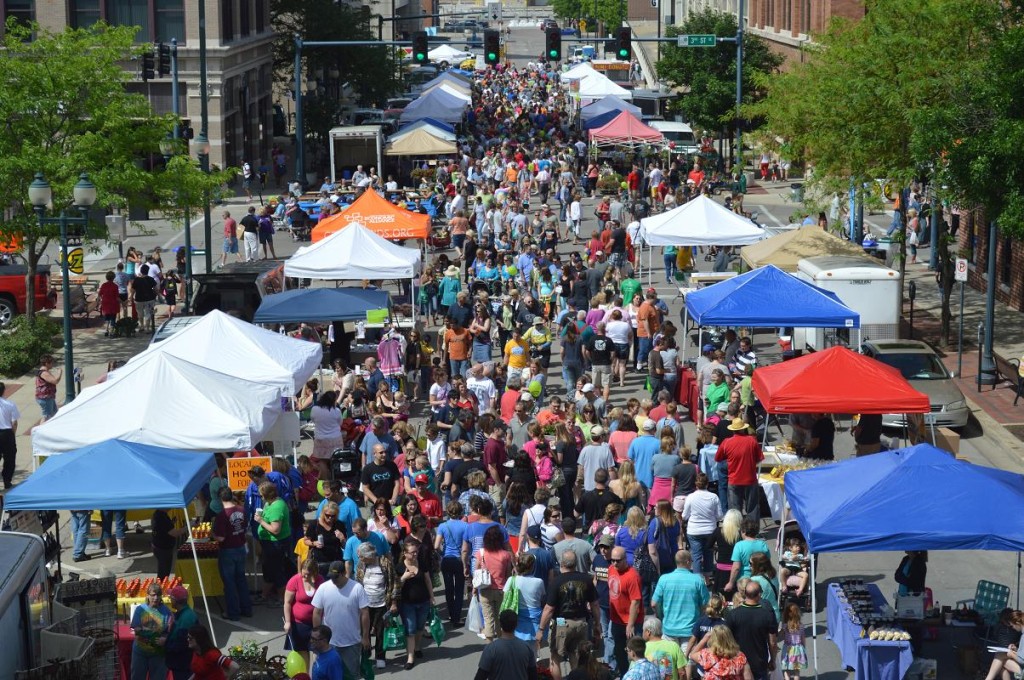 As Iowa surpasses 4,000 confirmed cases of COVID-19, and moved into triple digits in deaths, Governor Kim Reynolds announced she will allow select segments to “reopen.”

Reynolds has not further extended the state public health emergency declaration that requires certain businesses to remain closed to limit spread of the novel coronavirus through April 30, but will make an announcement next week.

On Friday, April 24, she announced that elective surgeries can resume beginning Monday, April 27, and farmers markets will be allowed to open, with social distancing and other recommendations.

“Ticketing will be a last resort,” she said. “I don’t anticipate any problems.”

Some markets, such as the Downtown Farmers Market in Cedar Rapids, attract up to 14,000 customers at each, with Market After Dark drawing about 50,000 people on a single night last year.

See photos from the 2019 opening day.

Restaurants and bars are limited to take-out and delivery orders, while clothing stores and others considered “non-essential” can offer online sales, with delivery or curbside pick-up.

Reynolds is considering other openings to go into effect on May 1, in spite of Iowa still not hitting its peak in the coronavirus pandemic.

“Now they’re talking about warm weather and sun and the impact that has on the virus,” she said during Friday’s press conference, even though medical experts have said that the coronavirus is not expected to diminish with those factors.

In just the past four weeks, 107 Iowans have died of COVID-19, the respiratory illness caused by the coronavirus, including 11 reported Friday, April 24, the most announced in a single day. Nationwide, the United States surpassed 50,000 deaths on Friday.

With 521 new COVID-19 cases reported April 24 in Iowa — another record high — the state has had 4,445 confirmed cases so far, even with limited testing.

In the past week, Iowa hit previous record highs in the coronavirus pandemic, including 482 new confirmed COVID-19 cases on Tuesday, April 21, and an additional 10 deaths reported on Saturday, April 18. Both have now been surpassed.

Even as the coronavirus takes its toll on health care workers, Reynolds made a “personal ask” Friday for nurses to volunteer to help with testing.

Reynolds has touted a new Test Iowa Initiative, signed with a Utah-based partnership, Nomi Health and DOMO, through a $26 million no-bid contract.

On Thursday, she revealed that television celebrity Ashton Kutcher, an Iowa native and friend of at least one of the businessmen involved in the Utah initiative, had told her about the company.

Test Iowa will eventually offer 3,000 drive-through tests per day. Iowans must go online to fill out an assessment to see if they are eligible for a test. Those who do not have access to the Internet should ask “a family member or trusted friend to help,” Reynolds said at a press conference.

Other states also are moving to ramp up their testing. Minnesota, for example, is teaming with the University of Minnesota and the renowned Mayo Clinic to eventually perform 20,000 diagnostic and 15,000 antibody tests per day.

Dr. Jakub Tolar, dean of the University of Minnesota Medical School, said in the Pioneer Press that he has confidence in the accuracy of the tests that will be deployed to Minnesota, and noted that hard work by university scientists have helped them understand the virus’ behavior and the best way to test for its presence.

Reynolds and state medical director Dr. Caitlin Pedati have been vague on the source of the tests coming to Iowa, and when asked about the reliability of the tests, only said they are FDA-approved.

At the same time, concerns have been raised about questions on the Test Iowa survey regarding hydroxychloroquine, a drug not approved to treat COVID-19. The Salt Lake Tribune reported that the CEO of the company behind Test Utah, and now Test Iowa, sits on the board of the pharmacy selling the drug.

Many of the confirmed cases in Iowa stem from long-term care facilities, where 13 outbreaks have been reported statewide, and where the majority of deaths are linked, and at meatpacking plants.

Despite calls from local officials to close the Tyson plant in Waterloo, Reynolds insisted that the plant remain open, but this week, operations at the plant were indefinitely suspended amid mounting absenteeism among the 2,800 employees — including many immigrants — at Tyson’s largest pork plant. At least one of the workers died.

At times, Reynolds has given mixed messages regarding her role in safeguarding the public’s health. During a press conference this week, she responded to a reporter’s question on the risks of keeping the Waterloo Tyson plant open by saying 50 to 70 percent of Americans are projected to get COVID-19.

“People are gonna get it,” she said. “A lot of times, Iowans don’t even know they’ve had it.”

In spite of Iowa’s increasing case numbers, Reynolds remains one of few governors to not issue a “stay at home” order to limit spread of the coronavirus, and only ordered tepid restrictions when a region in northeast Iowa hit a “10” on the state’s threshold level.