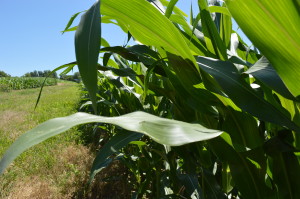 The company building a fertilizer plant in southeast Iowa will pay a penalty to resolve alleged Clean Water Act violations, according to the EPA. (photo/Cindy Hadish)

The company wooed to build a fertilizer plant in Iowa with more than a half-billion dollars in incentives has settled with the Environmental Protection Agency over alleged violations of the Clean Water Act at its construction site in southeast Iowa.

Gov. Branstad and his administration promised $100 million in state tax credits to Orascom, an Egyptian company that is building the plant in Lee County, and which has access to a reported $545 million in combined local, state and federal government incentives.

The latest update from the company’s website showed that construction at Iowa Fertilizer, which began near the town of Wever in March 2013, is on schedule to be completed by late 2015. The company faced scrutiny earlier this year when nearly 1,500 construction workers were laid off in April, with reports that new workers were being sought in Texas.

Now, Orascom is agreeing to pay a penalty over the alleged violations associated with construction of the plant.

Here is more from the EPA:

The Iowa Fertilizer Company and Orascom E&C USA have agreed to pay a $80,689 civil penalty to settle alleged violations of the Clean Water Act associated with the construction of a new fertilizer plant in Wever, Iowa, the U.S. Environmental Protection Agency Region 7 announced Wednesday, Aug. 19, 2015.

Orascom is Iowa Fertilizer’s construction contractor for the site and is jointly responsible for compliance under a National Pollutant Discharge Elimination System permit with the Iowa Department of Natural Resources. EPA Region 7 inspected the facility in June 2014 to evaluate the site’s compliance with its stormwater permit. Of the 369-acre site, construction-related activity had occurred on nearly 323 acres.

Construction projects have a high potential for environmental harm as they disturb large areas of land and significantly increase the potential for erosion. The Clean Water Act requires construction sites to have controls in place to limit pollution from being discharged via stormwater into nearby waterways. Without proper onsite pollution controls, stormwater runoff can carry pollutants into waterways and degrade water quality, threatening aquatic life and its habitat, and impair the use and enjoyment of waterways.

The Clean Water Act seeks to protect streams and wetlands that form the foundation of the nation’s water resources. Protecting streams and wetlands is also part of adapting to climate change impacts like drought, sea level rise, stronger storms, and warmer temperatures.
Following EPA’s inspection, the companies took actions to address the violations observed during the inspection and to return the site to compliance with the Clean Water Act. The proposed settlement is subject to a 40-day public comment period before it becomes final. Information on how to submit comments is available at the following link: EPA