Feeding fireflies: what do these beneficial beetles eat? 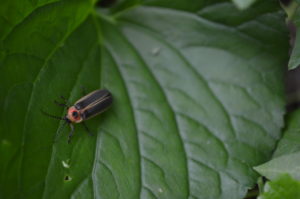 A lightning bug crawls along a leaf in Cedar Rapids, Iowa. (photo/Cindy Hadish)

As bothersome as Iowa’s humidity can be, it allows “nature’s fireworks” to thrive.

Lightning bugs, also known as fireflies, need a certain amount of humidity or they would dry up in the hot summer sun.

Given the abundance of rain that has been inundating the state, Iowa is well on its way to a humid summer and already, the first lightning bugs of the season can be seen flashing in the early evening; their method to attract mates.

Entomologist Donald Lewis notes that lightning bugs spend most of their life – up to 11 months of the year – as larvae living under damp mulch, leaf litter and plant debris.

Some Iowans may notice fewer lightning bugs in the state, compared to what they remembered from their childhoods. Pesticide use, loss of habitat and other factors have been cited behind this decline. Pristine yards are less hospitable to the larval stage of the lightning bug, as well as adults, which rest during the day in tall grass, trees, shrubs and crop fields. So perhaps we could use more overgrown yards to see more of these fascinating insects.

Lewis also noted that in their larval stage, lightning bugs prey on slugs and eat other insect larvae and snails. Adult lightning bugs might occasionally feed on nectar, he said, but generally do not eat, so the grass that children, and adults, put into jars with the lightning bugs they catch (make sure there are holes in the lids) likely won’t get eaten by the bugs, but could keep up humidity levels.

Rather than catching them, though, a better practice might be to just observe and admire these captivating beetles in their glowing twilight flights.