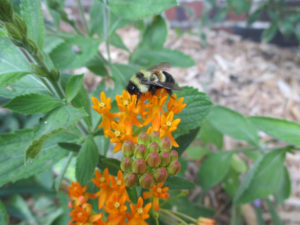 In 2017, the rusty patched bumblebee became the first bee species in the United States to be placed on the endangered species list.

The bee is one of about 4,000 native bee species in the United States, and like the others, is at-risk due to factors such as loss of habitat, and use of neonicotinoids, pesticides used to treat many greenhouse plants.

Now, the search is on for the endangered bee in Iowa, one of the last states where the bee is known to have lived.

Read on for today’s announcement from the Iowa Department of Natural Resources about the upcoming event:

Cedar Rapids – Iowa is one of the few states remaining that is home to the rusty-patched bumblebee, the first bee to be listed as federally endangered in the United States. Biologists have been working to identify the species’ status in the state and on August 3rd, they are asking for the public’s help.

The rusty-patched bumblebee (Bombus affinis) was put on the U.S. Endangered Species List in March of 2017 and has exhibited an estimated 87 percent decline over the last 20 years. It is present in only 0.1 percent of its original range and Iowa, along with a few other upper Midwestern states, seem to be serving as the species last stronghold. Last year, these rare bees were found in eight counties in Iowa, three of which, including Linn County, were “new,” meaning they hadn’t had any or only very old records of rusty-patched bumblebees.

The Iowa Department of Natural Resources (DNR), Xerces Society for Invertebrate Conservation and Linn County Conservation Board are inviting interested citizens to the Wickiup Hill Learning Center, near Toddville, on August 3rd from 9:30 a.m. to noon to learn about bumblebees, especially the rusty-patched, and then spend some time in the prairie searching for the rare bee. Coordinators hope to not only determine whether Wickiup Hill is home to the rusty-patched, but that people will take what they’ve learned and search their neighborhoods for the bee. Somewhat surprisingly, the rusty-patched bumblebee seems to flourish in urban-suburban habitats and is often found in people’s flower gardens.

“A large number of the records for this rare bumblebee have come from reports by people who discovered the bee in their flower garden,” said Stephanie Shepherd, wildlife biologist with the Iowa DNR. “In fact, I found several visiting my native garden in downtown Boone which was the first record in that county since the 1960s.”

Another hope is that participants will be inspired to create habitat for the struggling bumblebee. Flowers with heavy stores of nectar and pollen, especially native species and those that bloom both early and late in the year are especially attractive.

Sarah Nizzi with the Xerces Society points out that, “Native pollinators are incredibly important to our food chain, ecosystems, and human health. There are multiple conservation actions anyone can take to help maintain our native pollinators and their habitats whether it’s on a farm, in a yard, or within a city.”

Pre-registration is required for the event which will be appropriate for ages 12 and up. Find more information on the event and a link to register online at xerces.org/events. Participants should wear long pants, boots, hat and bring along a camera, bottle of water, insect repellent, and sunscreen for survey time outside through the prairies around the learning center. Deadline for registering is July 27.

Related: Stirring up a hornet’s nest