How wet is it? Iowa receives most rainfall in nearly three years 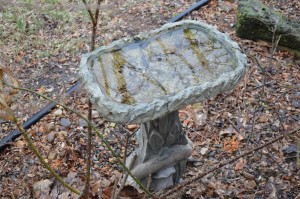 Water fills a bird bath during another rain shower in Eastern Iowa on April 15, 2013. (photo/Cindy Hadish)

If you think it’s been particularly rainy lately in Iowa, you’re right.

From April 7-14, Iowa experienced its wettest week since July 2010, with a statewide average of 2.90 inches of rain, according to today’s USDA Crop and Weather Report.

That compares to a weekly normal of 0.78 inches.

The heaviest rains fell from the evening of Monday, April 8,  through the morning of Thursday, April 11,  when two- to three-inch rains were widespread over northern Iowa. Significant rain also fell the night of April 7 and Saturday night into Sunday, April 14. It’s been a bit on the cold side, too.

Read on for more from today’s USDA report:

Weekly rain totals varied from 0.80 inches at Glenwood to 5.31 inches near Badger in
Webster County. Besides the rain there was a wide variety of weather
during the week. Thunderstorms brought scattered reports of large hail
over the southeast one-half of the state on Monday night. Another
round of storms brought large hail and high winds to parts of the
northwest one-third of Iowa on Tuesday afternoon and evening.

Wednesday and Wednesday night brought a very damaging ice storm to
far northwestern Iowa. Finally, colder air turned the rain to snow over
about the northwest one-third of the state later Wednesday and into
Thursday with six inches reported in Lyon and Osceola counties.

The reporting week began with mild weather on Monday (8th) with daytime
highs from the mid 50’s northeast to mid 70’s southeast. Sharply colder
air moved into the state for Tuesday (9th) but not before temperatures
reached as high as the upper 70’s in the southeast. Otherwise daytime
highs were only in the mid 30’s northwest to the 40’s over the south
through Friday (12th).

Warmer weather returned for the weekend with highs reaching into the mid 50’s southwest on Saturday (13 th) to the upper 70’s southeast on Sunday (14th). Temperatures for the week as a whole averaged from near normal over the extreme southeast to 12 degrees below normal over the far northwest. The statewide average
temperature was 3.9 degrees below normal for the week. Extremes varied from a low of 17 degrees at Sibley on Saturday (13 th) morning to highs of 79 degrees at Keosauqua, Oskaloosa and Ottumwa on Tuesday. Finally, soil temperatures as of Sunday (14th) varied from the low 40s north to upper 40s south.