The fairy tale success of Simply Soothing, Inc., a family-owned business based in Columbus Junction, tells only part of the story.

“People have romanticized all of that,” founder and CEO Freda Sojka said of the company’s seemingly overnight rise from basement operation to international sensation. “But it’s not all easy.”

Upon retiring after 22 years with Monsanto, Ms. Sojka started the bath and body products company in 2003 with her daughter, Nikki Salek. 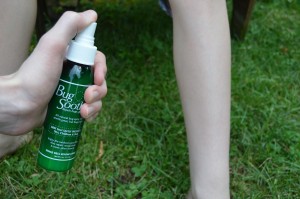 The company’s most well-known product, Bug Soother, is a natural bug repellent Ms. Sojka developed for her then 5-month-old grandson, which began its ascent during Iowa’s floods of 2008.

Ms. Sojka didn’t want to apply DEET – commonly used in insect repellent – or other chemicals on her grandson, so she combined lemongrass oil, vanilla and other natural ingredients to create her own formula.

The product was given a timely test when a crew working near her sister’s flooded home on the Cedar River was attacked by gnats. The Bug Soother worked, and their crew chief bought all of Ms. Sojka’s insect repellent the next day.

From there, news of Bug Soother spread by word of mouth, shared by fans at baseball games, on golf courses and more.

By 2011, a grocery store owner asked to sell the bug spray and in six weeks, more than 700 bottles flew off the shelves in the town of just 1,800. The following year, Simply Soothing moved into a bigger building to produce Bug Soother in larger quantities.

During that time, Simply Soothing was approached by numerous outlets hoping to sell their insect repellent, but demand was so great that they didn’t want to enter into more contracts than they could fulfill.

A European fan even asked about selling it overseas.

Looking back, Ms. Sojka said that time period was hectic, with 16-hour days, but among the high points for the company.

She found help and encouragement through the Cedar Rapids-based Entrepreneurial Development Center, including the EDC’s Founders Group of fellow small business owners.

“We share ideas and commiserate,” Ms. Sojka said. “There are high highs and low lows and they all have those stories.”

That led her to discover other homegrown businesses, which she tries to promote as much as possible.

“There are so many products made here in Iowa,” Ms. Sojka said, citing Tiny But Mighty Popcorn of Shellsburg and others. “We need to all hook together. We can help each other grow.”

That was part of the impetus behind the Simply Soothing Iowa Marketplace, a retail store opened in 2015 in Columbus Junction that sells the company’s products, along with wine, home décor, jewelry and other hand-crafted items made by Iowa artisans.

Ms. Sojka notes that she was advised against opening the retail store, but wanted to give others a place to sell their Iowa-made products.

“It’s a battle,” she said of the current state of retail, especially in a small town like Columbus Junction.

The same is true with the retail world for Bug Soother.

“It changes every year,” Ms. Sojka said, citing weather as a big factor in their sales.

During rainy years, the insect repellent sells well, but the past two years have been relatively dry with fewer insects, so larger retailers, such as Hy-Vee, had difficulty moving the product.

Competition also moved in, with other companies hoping to cash in on the success of Bug Soother with their own version of the spray.

Simply Soothing has had its share of growing pains, as well, but remains a family-owned business that employs six, a number that goes up to 20 when in manufacturing mode.

The popularity of Bug Soother has taken Ms. Sojka and other family members to Scotland, where a distributor dilutes the product from concentrated form and bottles and distributes it in Europe, as well as places such as Panama, a difficult market to enter, and Colombia.

During the past five years, Simply Soothing has had $6 million to $7 million in sales, with Bug Soother in more than 6,000 retail locations across the U.S.

The company is moving into more e-commerce, is producing larger-sized bottles for use on pets and horses and has started a line of essential oils. They are also looking into patio candles and a bug bite treatment and have an agreement with an East Coast company for their insect repellent to be sold under another name, including at Krogers stores.

At age 66, and with her husband, Jim, now 67, Ms. Sojka laughs when asked about retirement.

“In any business, you can’t let up,” she said. “There’s no coasting. You keep pushing.”

See images from Simply Soothing and read about other homegrown Iowa businesses in the Corridor Business Journal’s “Corridor Native” magazine.