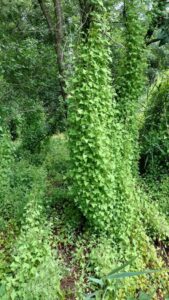 Just last week, an invasive earthworm that acts like a snake was identified in Iowa.

Today, officials announced that the invasive “mile-a-minute” weed was positively identified in Marion County, in the central part of the state.

Related: another invasive species in Iowa, the Japanese beetle

Learn more about today’s announcement from the Iowa Department of Agriculture and Land Stewardship:

DES MOINES – Mile-a-minute weed, an invasive weed from eastern Asia has been found for the first time in Iowa. Prior to this, mile-a-minute weed was known to be in the mid-Atlantic states, but only as far west as Indiana and Kentucky, and an outlier in Oregon.

A concerned landowner in Marion County requested identification assistance with a vine that was growing on the edge of a wooded area surrounding his well-kept garden. Representatives from the Iowa Department of Agriculture and Land Stewardship and Iowa State University Extension and Outreach visited the site. ISU weed scientist, Bob Hartzler, and a field agronomist identified the plant as mile-a-minute weed (Persicaria perfoliata).

It is unknown how widespread this invasive vine may be across the state. Iowans who think they have an infestation are encouraged to contact Bob Hartlzer at ISU at hartzler@iastate.edu or 515-294-1164, or Lane Kozel, deputy weed commissioner for the Iowa Department of Agriculture and Land Stewardship, at Lane.Kozel@IowaAgriculture.gov or 515-725-1468 for assistance with identification.

Mile-a-minute weed is an invasive species in the Polygonaceae (smartweed) family. It is a herbaceous annual vine that can grow up to 20 feet long; has light green, triangular leaves; many sharp, downward curving spines on the stem, petiole and main leaf veins; a saucer-shaped sheath (ochrea) that encircles the stem at the nodes; and round, iridescent blue fruit about 0.25 inches in diameter borne mid-July until frost.

“Although this was my first encounter with mile-a-minute weed, it was easy to see why the plant is considered a threat,” according to Bob Hartzler. “This infestation was less than a quarter acre in size, but it was crowding out existing vegetation. The weight of the plant was pulling down a stand of miscanthus, a species known for establishing monocultures.” 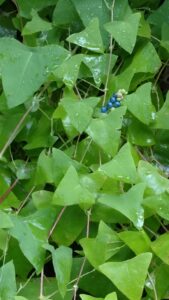 Leaves of the mile-a-minute weed. photo/Iowa Department of Agriculture and Land Stewardship

Mile-a-minute weed grows best in moist, sunny locations with an abundance of plant material such as leaves, duff, or brush on the soil.

Seed can be spread birds, rodents, and humans. Seeds can also move with water, especially from infestations along a stream. Human-assisted movement can deliver seeds to new sites with alarming speed. Movement of soil containing seeds via potted plants or equipment with soil attached is common in infested states.

There is no easy method for eradicating invasive species, and mile-a-minute weed is no different. It appears this infestation had been present for at least five years, thus there will be a large seedbank present.  Studies have shown seed can survive for at least eight years, and management will take a long-term commitment.

Herbicides can be effective, but multiple applications will likely be necessary during the growing season. Nonselective herbicides will damage other plants in the area, opening the site up for invasion of other weeds or new flushes of mile-a-minute weed. The plant has a small root system, so hand pulling is a relatively easy (gloves are recommended due to the spines) and effective way to remove plants.

The Forest Service has worked on the biocontrol of mile-a-minute weed since 1996. Iowa officials are now investigating the potential for using a weevil that is host-specific to the invasive vine.  The weevil has been released in other states since 2004, with success tied to weather conditions. “We are looking into the details associated with possible weevil releases to help control mile-a-minute weed,” said Kozel.