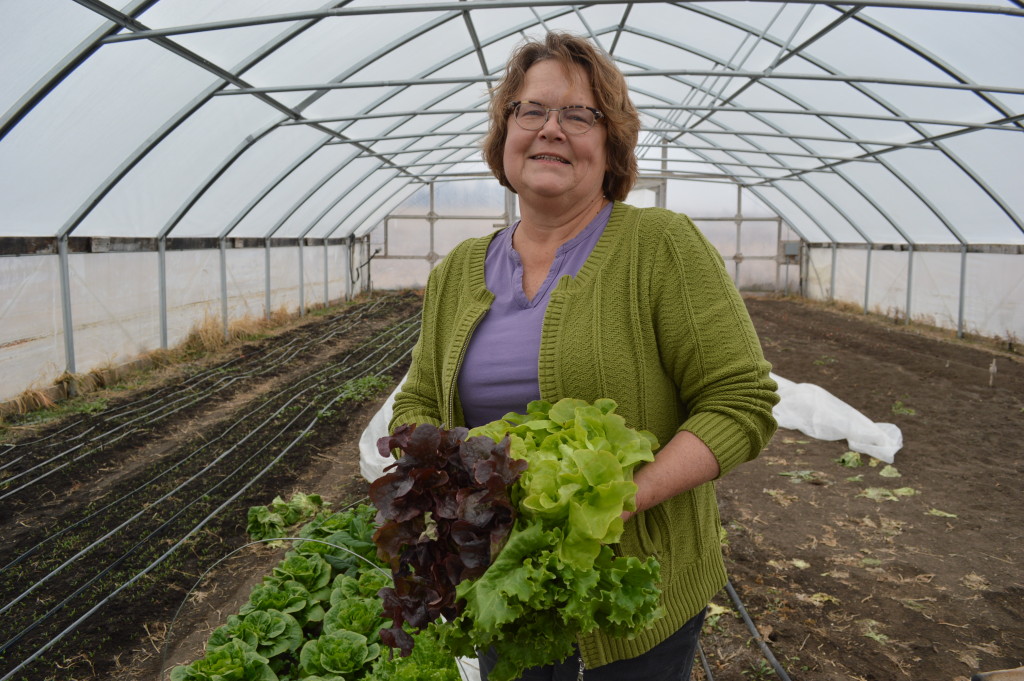 Laura Krouse is shown in December 2014 with some of the produce grown in her hoophouse in rural Mount Vernon, Iowa. (photo/Cindy Hadish)

MOUNT VERNON, IOWA – It’s essential to life as we know it, but most people take the Earth’s soil for granted.

Krouse, owner of Abbe Hills Farm, has spent a lifetime learning about soil and the past 26 years improving it on her rolling fields in rural Mount Vernon.

“Every environmental issue you can think of is impacted by what we do with our soils,” Krouse said, citing climate change and flooding, among examples. “Soil is so huge it impacts almost everything we do – what we eat, how we breathe and the water we drink – but yet we almost never think about it.”

Globally, awareness is growing, with the United Nations General Assembly declaring 2015 as the International Year of Soils.

The designation acknowledges the threat to the world’s soils caused by expanding cities, deforestation, unsustainable land use and management practices, pollution, overgrazing and climate change. “The current rate of soil degradation threatens the capacity to meet the needs of future generations,” the UN notes.

Ironically, that message will likely go unnoticed in the agricultural Midwest, Krouse said, citing habits that are difficult to change. Fall tilling, for example, has proven to have a negative impact on soil health, she said, but some farmers continue to use the practice.

Tilling allows weed seeds to germinate by bringing them to the surface, leads to soil compaction and leaves the soil bare. “Soil does not like to be naked and exposed to the elements,” Krouse said, noting that erosion can occur due to that exposure.

Cover crops, such as oats, rye, clover or even radishes, can be planted from mid-August through September to serve as a living cover for the soil during winter months until spring planting. 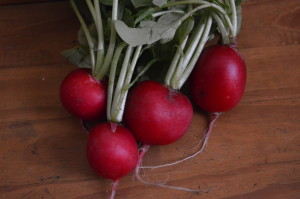 Radishes from Abbe Hills Farm are sold at farmers markets, in a CSA and through the Iowa Valley Food Co-op. (photo/Cindy Hadish)

She also sells her farm’s eggs at the indoor Mount Vernon Farmers Market, along with lettuce, radishes, kale, potatoes, Brussels sprouts and other vegetables, some of which are grown in Abbe Hills’ hoophouse, where plants can grow later in the fall and start earlier in the spring.

A growing number of spots on her 72-acre farm are planted in vegetables, and in addition to cover crops, Krouse uses a five-year crop rotation on the land. Year 1 is for gardens; year 2 in corn; year 3 is when alfalfa or oats are planted for a cover crop and years 4 and 5, the cover crop remains in place.

Rotating the crops helps to diminish the insect pests or diseases that depend upon a particular crop to survive. Put in simple terms, when that plant is gone, Krouse said, the pests run out of food and die.

A former biology teacher at Cornell College in Mount Vernon, Krouse has both undergraduate and graduate degrees in agronomy and often gives presentations about natural resources, water quality and food.

The CSA families are frequent visitors to Abbe Hills, where children spend time playing with the farm’s kittens or watching the chickens peck the ground for insects. 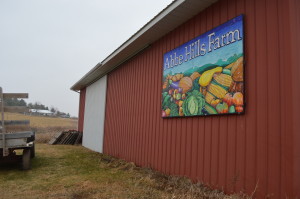 Younger visitors are also among the most enthusiastic when it comes to learning about soil, Krouse said, with children eagerly grabbing handfuls to feel the texture, which is an indicator of its health.

Good soil condition with high organic matter is better at absorbing water and provides other benefits compared to compacted soil, she noted.

The soil food web, a term increasingly discussed by proponents of organic foods, involves an entire underground ecosystem that teems with life when the soil is healthy, Krouse said.

Microscopic organisms, tiny insects, fungi, worms and more create the complex food web, in which the waste products of one organism become food for another.

“There’s no pollution,” Krouse said, quoting Francis Thicke, an Iowa organic dairy farmer who holds a PhD in soil science and is one of Krouse’s mentors. “Every bit of waste is someone else’s food.”

Thicke said Krouse’s methods of using cover crops and other soil building practices in producing food for local people makes her an inspiration.

“Since farming began in Iowa we have lost half of our topsoil to erosion and more than half of our black organic matter to oxidation, so we have been deficit spending our ecological capital all these years,” Thicke said. “Laura demonstrates that it is possible to farm in ways that not only do not deplete our natural resource base, but actually increase our ecological capital.”

Organic matter in the soil can be tested at a lab, but also can be felt in a farmer’s hands. Krouse said healthy soil should be soft, but not powdery, and looks, in a way, like cake crumbs of varying sizes and shapes.

Without organic matter, those “crumbs,” or minerals in the soil, would fall apart and the soil could become compacted, lessening its ability to hold rainwater.

“Most of what’s good for soil conservation is also good for soil health,” Krouse said, noting that about half of soil is composed of air and water, with minerals making up about 45 percent and organic matter, 5 percent.

“Roots need air and they need water and that particular combination is perfect for them,” she said. 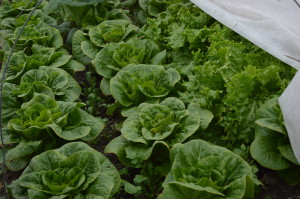 By using organic practices and avoiding chemicals that kill off the important organisms, Krouse said, farmers can build healthy soil that offers higher yields and healthier plants. “The better the organic matter and more living things in that soil, the better the tilth,” she said, referring to the condition of the soil.

Even chickens at Abbe Hills Farm play a role in soil health, with their nutrient-rich manure composted before being used as a fertilizer.

Krouse said building healthy soil can extend to home gardens, as well. She noted that gardeners can keep their gardens covered with leaves or other mulch in the winter. Gardeners also can plant cover crops and ask their local garden center to carry small quantities of cover crop seed.

She knows that not everyone is as enthusiastic about soil as she is.

Still, even people who aren’t concerned about the soil’s connection to environmental issues care about soil health when it comes to the fruits and vegetables they eat, Krouse said.

For more about Abbe Hills Farm, go to: www.abbehills.com 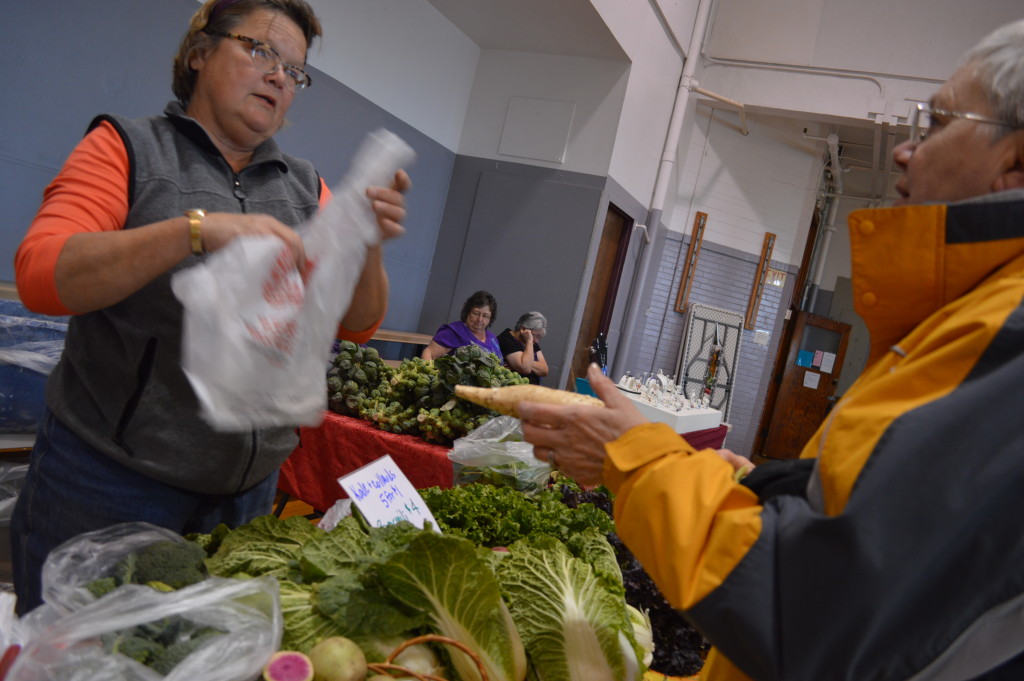 Laura Krouse, left, talks to a customer during the indoor Mount Vernon Farmers Market, where Krouse can often be found on Saturday mornings. (photo/Cindy Hadish)