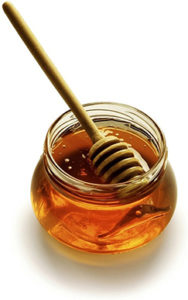 Iowa’s State Hygienic Laboratory, based in Coralville, has validated a testing method that can screen honey for an ingredient in Monsanto’s Roundup.

Learn more about the method, and some of the results, from the State Hygienic Lab:

The “all-natural” honey marketed and sold in some Midwestern stores might not be all that natural, after all, according to a testing method validated by the State Hygienic Laboratory.

Tests conducted at the lab in Coralville show even honey labeled “pure” contains residues of glyphosate, an ingredient in Monsanto’s Roundup. The herbicide is the world’s most common weed-killer, with widespread use particularly in agricultural fields in the Midwest.

“The bee farmers are throwing their hands in the air because they’re not using glyphosate on their fields,” said Dr. John Vargo, environmental lab scientist for the SHL. “But the bees don’t know where the property lines are.”

Vargo said bees that forage in fields where farmers use the herbicide can bring glyphosate back to the hives where the honey is made.

Bees can fly 2 miles or even more from their hives to forage for nectar and pollen.

Unlike neonicotinoids, an insecticide used to treat corn and soybean crops that is considered highly toxic to bees, glyphosate is not thought to contribute to colony collapse disorder, which has decimated bee populations.

Still, the findings have raised concerns.

Levels of up to 650 parts per billion were found in the honey tested by the SHL, with 10 of 11 samples of products from Iowa, Minnesota, Kansas and Colorado all having detectable amounts of glyphosate.

“I don’t think you’re going to find any honey samples in the Midwest that don’t have glyphosate,” Vargo said.

The U.S. Environmental Protection Agency has not established any tolerance levels for glyphosate in honey, as the chemical is not used in honey production, while the European Union has set a maximum tolerance level in honey at 50 parts per billion.

Environmental and consumer advocates who point to the herbicide’s reported link to cancer have filed a lawsuit against the Iowa-based Sioux Honey Association, alleging deceptive and misleading labeling of its Sue Bee and Aunt Sue’s honey brands.

Vargo was asked by a former colleague to have the lab conduct an independent validation of the method the Food and Drug Administration was using to test honey.

Last spring, the SHL performed a variety of quality control tests on the FDA’s liquid chromatography/tandem mass spectrometry (LC-MS/MS) method that validated the procedure with minor modifications, he said.

Vargo co-authored a paper last summer with FDA chemist Narong Chamkasem that cited the findings and is included in the FDA’s Laboratory Information Bulletin, used for the rapid dissemination of laboratory methods that appear to work.

The lab has performed the tests in conjunction with the Iowa Department of Inspections and Appeals and also can screen honey for beekeepers or others on a fee-for-service basis.

In 2015, a World Health Organization agency declared glyphosate a “probable human carcinogen,” but Vargo said product tests have not shown a definitive cause between intermediate amounts of glyphosate exposure and human cancer, so the amount of honey consumed in a typical diet likely would not be a concern.

“There are contaminants in everything we eat and drink,” he said, citing highly sensitive equipment available now that can detect trace amounts of chemicals, which would have gone undetected 20 or 30 years ago.

While so far, honey is the only food the lab tests for glyphosate, there could be a demand for testing of other foods on the horizon.

Learn more about the lab’s science and the role it plays at Lab Link.