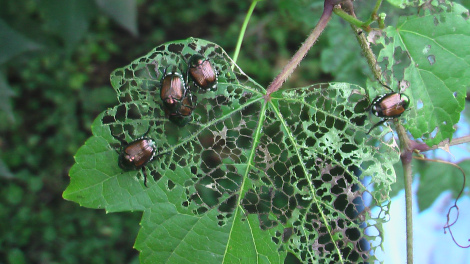 (UPDATE: A short-lived reprieve; first two Japanese beetles of the season spotted on our raspberry bushes on June 26.)

The first Japanese beetles of the season are typically spotted around this time in east-central Iowa, but so far there appear to be no signs of the voracious invaders, at least in our Cedar Rapids gardens.

Record low temperatures in January that dipped to 30 degrees below zero in Cedar Rapids, with similar numbers in the rest of the state, were rumored to have killed off Japanese beetles and other pests, such as the emerald ash borer.

Entomologists say the grubs of Japanese beetles are burrowed far enough underground during the winter that the cold doesn’t affect them and that some, but not all of the emerald ash borers might be affected by the cold.

Still, it’s nice to tick off another day where the Japanese beetles aren’t devouring raspberries, roses and other favorite feasts.

The beetles, easily identifiable with their copper-colored wings and metallic green head and body, consume more than 300 plants, such as linden trees, hollyhocks and grapes.

They leave behind skeletal foliage that looks like lace; another way to identify the foreign invaders, which were first recorded in Iowa in 1994 and typically disappear by late July or early August.

Chemical means of attacking Japanese beetles can harm our butterflies, bees and other beneficial insects, so one removal method is knocking them into a bucket of soapy water. Try it in the late afternoon, when the beetles have less of a tendency to fly away and escape.

Although they might look aesthetically less appealing, most healthy trees should survive even the voracious appetite of Japanese beetles.

Organic methods of control include using milky spore in the soil, which treats beetles in the grub stage, and sprinkling self-rising flour on plants, which would need to be done frequently with the rain Iowa has been experiencing.