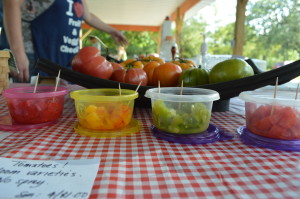 A good variety of heirloom tomatoes were sold and sampled at the Central City Farmers Market, along with a wide selection of other items, on Thursday, Sept. 19, 2013. The market’s last day of the season will be Thursday, Sept. 26. (photo/Cindy Hadish)

It may be the last Downtown Farmers Market of the season this Saturday in Cedar Rapids, but you still have the opportunity to find fresh produce and more at many Eastern Iowa markets.

I’ve been to several small-town farmers markets this year and had a great time at every one of them. Today, I made it to the Central City market, sponsored by the town’s Mainstreet program and held at Courtyard Park.

Markets like Central City’s don’t have hundreds of stalls to meander through, but I found a great variety of produce, at reasonable prices. Also, most of the vendors who sell handcrafted items also sell baked goods, honey or other local foods, which means that even with smaller numbers, you still can find a wide selection.

Like others I’ve visited this summer, Central City had a grill going, and tables where customers could sit and eat the hot sandwiches. Maybe best of all, even with a brief downpour in the middle of the market, everyone stayed dry under the park pavilion where the market is held.

If you want to check out the Central City Farmers Market for yourself, you’ll need to hurry. The last one of the season is scheduled for next Thursday, Sept. 26, from 4-6 p.m. While some markets will end their season at the end of the month, you can find those that keep going into October on the Homegrown farmers market list.

Finally, if you’ve never been to the Downtown Farmers Market in Cedar Rapids, this is your last chance to check it out this year. Here are details from the Cedar Rapids Metro Economic Alliance:

The final Downtown Farmers’ Market of the eighth season will be held this Saturday, Sept. 21! As usual, the market will be held from 7:30 a.m. to Noon in downtown Cedar Rapids.

Shoppers will find entertainment stationed throughout the venue, including Johnny Lipford near the Cedar Rapids Museum of Art and Rapid 8’s Square Dancing at Fifth Street and Third Avenue. The Main Stage will be active with performances starting at 7:30 a.m. by Washington High School String Ensembles and others.

A huge thanks goes out to sponsors, volunteers, vendors and entertainers for making this another fantastic Downtown Farmers’ Market season!