Location is key to farmers market success; some Eastern Iowa markets closing while others thrive 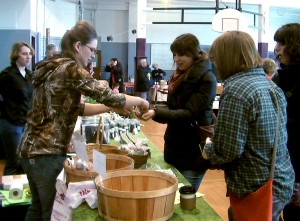 Laura Strabala and Danielle Martin (from left) help customers at their stand at the Mount Vernon Winter Farmers Market in March. The market will open for the outdoor season on May 2. (photo/Cindy Hadish)

Location is a prime factor for more than the real estate market.

Farmers markets also are finding success and failure based in large part on the markets’ visibility and proximity to neighboring market venues.

“The number one thing that everyone agrees on is being on main roads – at least to see a sign,” said Rachel Wobeter, who works with farmers markets in seven counties as local food program manager for the University of Northern Iowa.

Marion’s farmers market will test that premise with a new location this year.

The market, which moved last year to Taube Park on 31st Street after decades of success at the Marion Shopping Center, will be settling in May 4 at Marion Square Park, Seventh Avenue and 10th Street.

“Some of it has to do with a little bit more exposure there,” said Marion Parks Director, Mike Carolan, adding that the park depot’s shelter also will be useful for vendors.

Construction prompted the move to Taube Park, and while vendors had a successful year there, Carolan said the new location will be in the heart of Marion, with a recently constructed plaza making access easier for pedestrians.

Less than 10 miles to the east, the Springville Farmers Market has ended both its indoor and outdoor markets after six largely successful years, Market Manager Lena Gilbert said.

Gilbert, recently elected to the Iowa Farmers Market Association Board of Directors, cited the farmers market “boom” in the area, which resulted in a loss of vendors and customers from Springville to larger markets nearby.

UNI’s Wobeter said that demise is not uncommon as some communities become saturated with farmers markets.

“The general scene up here is kind of dwindling a little bit,” she said, citing a few markets that won’t reopen this year. “We offer a lot of markets, so we may be spreading the vendors a little thin.”

Many growers are like Evelyn Walshire of rural Cedar County, who sells vegetables at three markets: Mount Vernon, Mechanicsville and Tipton, which has operated for nearly 30 years.

The Tipton market’s location near the Cedar County Courthouse places the venue in a central spot in town, where customers are accustomed to the site, Walshire said.

Danielle Martin, market manager for the Mount Vernon Farmers Market, said some vendors are leaving for the NewBo City Market in Cedar Rapids, but Mount Vernon still will have 20 to 25 vendors, including more produce growers, when it opens outdoors May 2.

“We’re getting a couple new vendors, too, so it will balance itself out,” said Martin, who also sells vegetables, baked goods and more as a vendor.

Teresa White, farmers market supervisor for Cedar Rapids, said the city’s Eighth Avenue market will close this year. Those vendors have been invited to sell at the NewBo City Market, which opened in October and will offer outdoor markets beginning May 2.

“They don’t need two markets two blocks from each other,” White said. “It makes more sense to see one succeed.”

The Noelridge farmers market in Cedar Rapids will continue to operate on Mondays, Wednesdays and Fridays and the large-scale Downtown Farmers Market will be held twice-monthly on Saturdays from June through September.

Wendy Zimmermann, interim executive director of the NewBo City Market, said the venue is a public market that includes food vendors indoors and a farmers market component that is meant to complement, rather than compete, with other markets.

Both West Liberty and North Liberty had differing reasons to suspend farmers markets in those cities. The Sycamore Mall site in Iowa City also is closing, due to time-constraints to operate the farmers market.

“If someone would approach me who would like to run it, I would assist them,” he said of the outdoor markets. “But as of right now, I don’t have any plans to restart it.”

Letha Ottaway, chief operating officer for the West Liberty Chamber of Commerce, said two of the regular vendors dropped out, which led to the decision to close West Liberty’s market this year.

Ottaway said only a “glimmer of hope” remains for the market to reopen.

“It would be nice if it would,” she said. “We think it’s a worthwhile thing.”

Pick up a copy of any of these newspapers the week of April 22, 2013, for a list of area farmers markets to cut out and use as a reference for the season: Mount Vernon-Lisbon Sun; Marion Times; North Liberty Leader; West Branch Times; West Liberty Index; Solon Economist; Tipton Conservative & Clarence Lowden Sun-News. Find a list of more markets on the tab above.