Neighbors say truth on their side, as Cedar Rapids City Council votes to favor Cargill railyard

CEDAR RAPIDS — If all goes according to schedule, residents in southeast Cedar Rapids will share Thanksgiving next year with their new neighbor: a 12-track, 200-car industrial railyard.

After hearing more than 3 hours of public comment — with many opposed to the railyard — the City Council voted unanimously to amend the city’s future land use map from urban low intensity to urban high intensity and to rezone the land, south of Otis Avenue, west of Cole Street SE,  from suburban residential large lot to general industrial.

Council member Susie Weinacht was traveling and did not attend the meeting.

Once approved, after two more readings on Dec. 3 and possibly Dec. 17, those changes would allow Cargill to build the railyard, which will operate 7 a.m. to 7 p.m., every day of the year.

Nearly 17 acres would be used for the railyard, with the rest dedicated for a conservation easement that city staff said would serve as a buffer to the neighborhood, though no buffer has been proposed for the park. 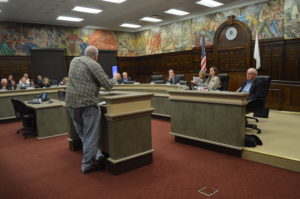 Kerry Sanders, a resident of the Prairie Park neighborhood, speaks against the rezoning of land for Cargill’s proposed railyard on Tuesday, Nov. 19, 2019. (photo/Cindy Hadish)

More than 30 people spoke during the two public hearings on Nov. 19, and the city received 37 objections prior to the meeting.

Most of the neighbors opposed the railyard, which they said would pollute and disrupt their quiet neighborhood, while those who spoke in favor of the project, including Cargill employees, cited the jobs that the ag giant provides at the plant.

The railyard would allow Cargill to store up to 200 freight cars at the site, about one mile from its corn milling plant on Otis Road SE.

“We can’t run this business without this railyard,” Pulis said during the hearing. Cargill began operating in Cedar Rapids 51 years ago.

Aleasha LeClere, who has lived on Riverview Street SE for 9 years, questioned how military veterans who live in the area would react to the constant, disruptive noise.

Gary Driscoll, who lives in northeast Cedar Rapids, but regularly visits Prairie Park Fishery, called the park a “gem” and questioned why the council would consider putting the park and neighborhood at risk with an industrial railyard.

“If you can honestly say you’d want a railyard next to your property, then vote ‘yes,'” he said.

Rob Hogg, a state senator and attorney who lives on Otis Road SE, his wife, Kate, and daughter, Dorothy, all spoke against the rezoning and land use change, asking the city to honor the land use plans that the couple relied upon when they bought their home in 1999.

Rompot, a working class neighborhood in the area of the proposed railyard, is still recovering from the devastating 2008 flood. 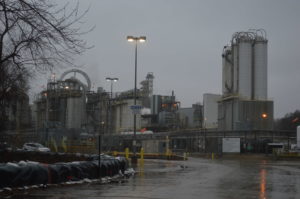 “Do not make a decision as if the flood of 2008 will never happen again,” Hogg said.

“Human beings are not disposable,” she said.

Barbara Stary, who lives on Riverview Street SE, and owns land on Otis Road, said Cargill did not meet with the neighbors as many times as they claimed.

“We don’t have money on our side, but we have the truth,” she said.

Jeff Franks, who moved into his home on Helen Court SE in February, asked if anyone on the council would want to buy his house.

“I never would have bought it if I would have known that railyard was going to be there,” he said.

None of their pleas swayed the council, several of whom cited Cargill’s promised tree plantings and buffers as sufficient mitigation.

Council member Ashley Vanorny accused Rob Hogg of “grandstanding,” saying the senator, known for his environmental advocacy, seemed more concerned about his property values and compensating the neighbors than the environment.

Hogg has consistently cited environmental and flooding concerns on the proposed site of the railyard leading up to the meeting on his social media platforms.

“As I have said, there are existing rail yards that are or will be flood protected in Cedar Rapids that already serve Cargill. Don’t rezone a Prairie Pollinator Zone for a rail yard in the floodplain, especially without flood protection!” he wrote on Facebook and Twitter. Cargill has purchased nearby farmland that the company plans to plant to mitigate the removal of the pollinator zone.

Vanorny later apologized for her comments.

Council member Scott Olson suggested money from the sale of the land and future tax revenue from the railyard might be put into a separate fund for the residents, but Dale Todd cautioned against it, warning it could cause a “run” on buy-outs.

After the meeting, Hogg said the neighbors might choose to take the city to court, but acknowledged they don’t have monetary resources that would be needed.

“They’re paving paradise to put in a parking lot,” he said, quoting the Joni Mitchell song.