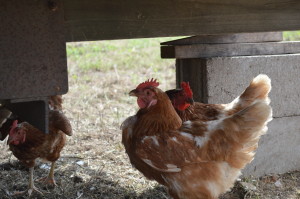 North Liberty, Iowa, would allow up to four chickens per household under a proposed ordinance change. The first of three readings passed Tuesday, Aug. 13, 2013. (photo/Brennan Bell)

NORTH LIBERTY – Neighbors no longer must give their approval to chicken-seeking residents of North Liberty, under the initial reading of a proposed ordinance change.

City Council members last night voted 3-2 to pass the first of three readings to allow up to four chickens per household.

The ordinance would allow residents to seek a permit to keep chickens in coops or enclosures 25 feet from a neighboring property line; no roosters would be allowed.

City Administrator Ryan Heiar said a provision that initially required  would-be chicken owners to obtain written approval from all neighbors was deleted from the proposal.

Heiar noted that neighbor consent is not required in other circumstances under city code and no provisions were made for approval when new residents moved into a neighborhood.

The first reading also included an added deposit of $250 that must be paid up-front, along with a $20 permit fee, plus $3 per band for each chicken.

Heiar said the deposit would be used in cases where chickens were  abandoned or got loose and had to be taken to a shelter.

Daniela Williams, one of the supporters of North Liberty’s urban chickens proposal, said she was happy the process is moving forward.

She and her partner, Wes Hepker, have advocated for the ordinance change as an extension of their sustainability efforts in raising their own food.