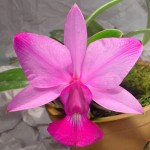 If you had hoped to get your springtime fix of flowers tonight at the Eastern Iowa Orchid Society meeting, I’m afraid you’ll have to wait until next month.

Nile Dusdieker said due to the snowstorm, the meeting scheduled for tonight has been cancelled. The group’s guest,  David Bird of Kansas City, will come to the next meeting on Tuesday, April 2, 2013.