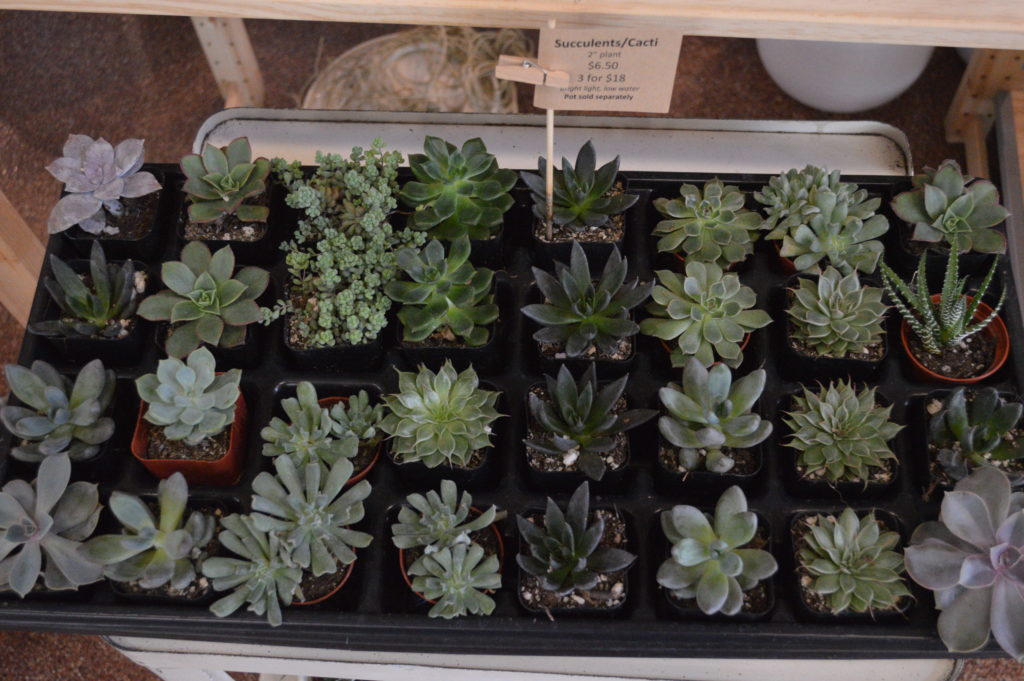 Succulents are among the houseplants sold at Moss, shown here at its location in NewBo City Market in Cedar Rapids, Iowa. (photo/Cindy Hadish)

Anne Armitage turned her lifelong passion for plants into a career, which now includes shops in both Cedar Rapids and Iowa City.

They opened their second site, called Moss, two years ago at 112 E. Washington St., in Iowa City, and have since renamed their Cedar Rapids business Moss, as well, to reflect a move from fresh-cut bouquets into more earthy products and plants.

“I’ve just always been someone who’s interested in plants,” Ms. Armitage said, surrounded by a wide selection of succulents, cacti, tropicals and other houseplants at her site in the NewBo City Market.

The shops also sell decorative pots — a new wave of animal inspired planters is the latest trend — and plant-related accessories, along with cards, jewelry, candles and other gifts. 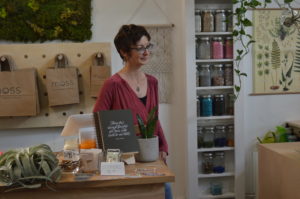 Anne Armitage is shown at Moss in NewBo City Market in 2018. (photo/Cindy Hadish)

Ms. Armitage avoids plants that are “finicky,” even if they are en vogue. She notes that Moss no longer carries ficus lyrata, commonly known as fiddle-leaf fig, after realizing the tropical plants might initially look beautiful, but may drop their leaves and can be short-lived from the stress of long-distance travel.

Instead, she focuses on plants that thrive indoors, which can add benefits to a home or business, whether through added ambiance and beauty or even by making indoor air healthier. Studies have shown that indoor plants can absorb harmful toxins such as benzene and formaldehyde.

Some of Ms. Armitage’s favorite plants are tropicals, including a 7-foot-tall bird of paradise that she grows in a south-facing window at home and a rubber plant that “feels especially jungle-like.”

“They really make an impact,” she said of the large tropical plants.

At this time of year, plants are often given as hostess gifts for parties, but you won’t find the ubiquitous poinsettia at Moss. The typically red and green plants, with some in newer pastels and even sprayed with glitter, are considered a “novelty” by Ms. Armitage, and “they’re everywhere,” she said. “I don’t want to deal in novelty things.”

Other holiday favorites, however, such as Christmas cactus, blooming amaryllis and paperwhites can be found at Moss.

Mini succulents – plants that can thrive with little water – are among the top sellers year-round.

“They’re adorable and at a good price-point,” Ms. Armitage said, adding that air plants and tropicals also are riding a wave of popularity. Air plants, which live without soil, but do need water, come in a wide array of shapes and colors, including new reds and fuchsia.

Ms. Armitage recommends aloe vera – a succulent with medicinal purposes – and jade, sansevieria, commonly known as mother-in-law’s tongue, and peperomia for those who don’t consider themselves “green thumbs,” as they require little care.

Pothos, a popular ivy-like plant, is another easy-to-grow houseplant. 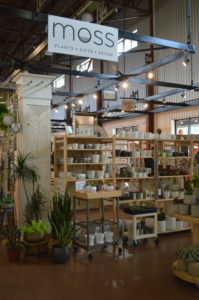 Moss offers care tips for all of the plants it sells. Here are some of the basic ones:

— Know the light needs. Sansevieria, or mother-in-law’s tongue, can do well in a windowless office. Others, including some tropical plants, need more light, such as an east- or south-facing window.

— Know the water requirements. Some plants, such as cacti, prefer dry conditions, while others need more frequent watering. Over-watering is one of the main houseplant killers.

— Know the soil needs. Air plants can live without soil, though they do need water. Cacti and succulents prefer a course, well-drained sandy mix, while other houseplants do well with a soilless mix of peat moss, vermiculite and perlite.

Two of the frequently asked questions Anne Armitage hears are what houseplants are safe around pets and which are air-purifying plants.

Here are some of the top choices:

Fairy gardens are magic in miniature 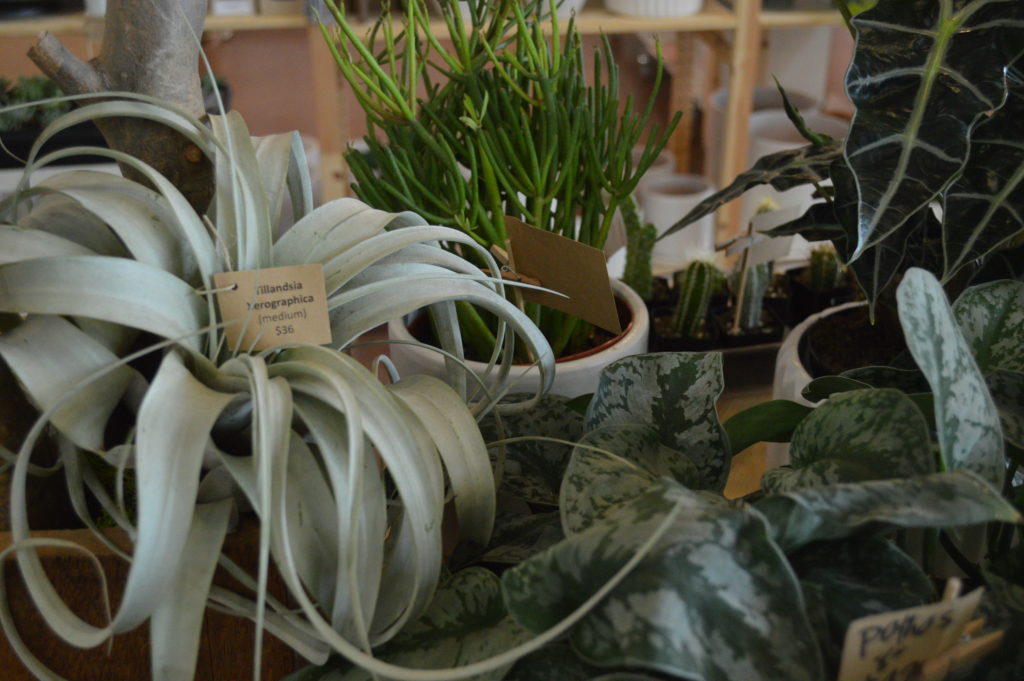 Moss offers a wide variety of houseplants at both NewBo City Market in Cedar Rapids and its Iowa City location. (photo/Cindy Hadish)