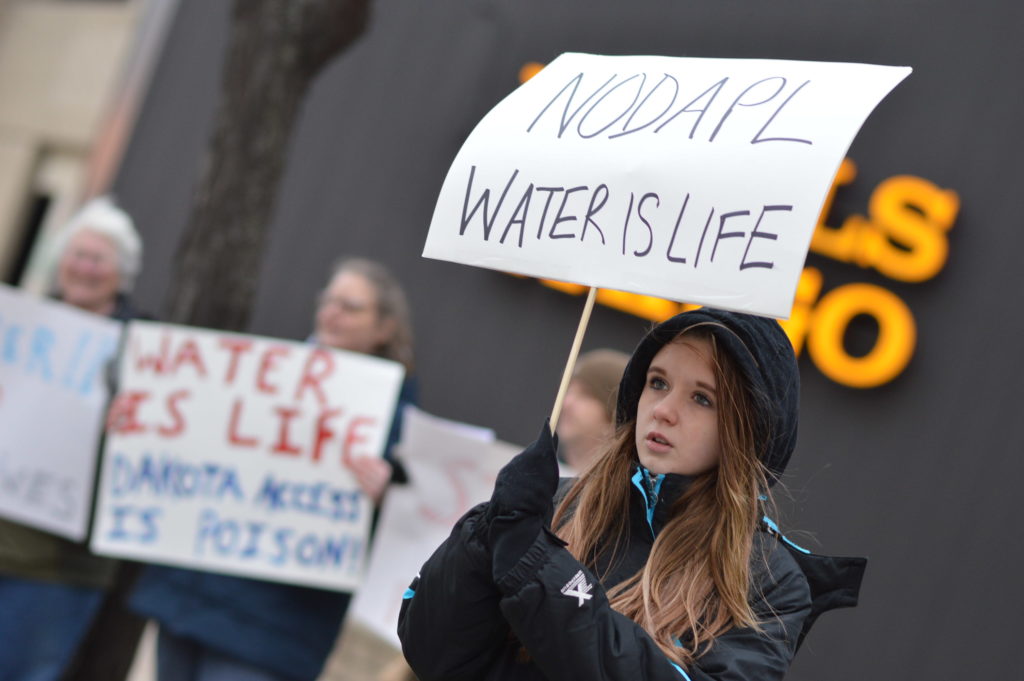 Makynzie Doyle, 12, joins other demonstrators in a protest against the Dakota Access pipeline outside of Wells Fargo in downtown Cedar Rapids on Dec. 1, 2016. (photo/Cindy Hadish)

CEDAR RAPIDS – An 85-year-old nun was asked to move from Wells Fargo property in downtown Cedar Rapids during a protest Dec. 1 against the Dakota Access pipeline.

More than 20 people gathered outside the bank, at 150 First Ave. NE, to draw attention to Wells Fargo’s investment in the crude oil pipeline, which is set to run through Iowa and is central to an ongoing protest at the Standing Rock Sioux reservation in North Dakota. 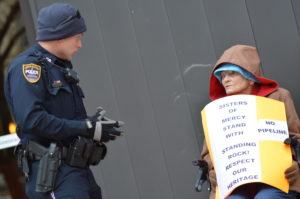 A Cedar Rapids police officer asks Sister Alice Maiers to move from the Wells Fargo property, where she was sitting during a protest against the Dakota Access pipeline. (photo/Cindy Hadish)

“This is an important issue,” said Sister Alice Maiers, one of five Sisters of Mercy who joined the protest in downtown Cedar Rapids. “We don’t want our land and water polluted.”

Maiers, 85, said she also came to show support for the water protectors in North Dakota, who are facing sub-freezing temperatures and other harsh conditions. 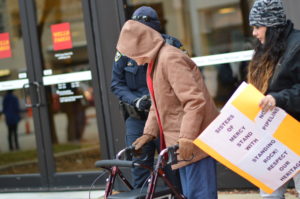 Sister Alice Maiers uses her walker to move away from the Wells Fargo building, which she was using as a windbreak during a protest Dec. 1, 2016, in Cedar Rapids. (photo/Cindy Hadish)

Windy conditions in Iowa’s near freezing weather on Thursday prompted Maiers to set her walker next to the Wells Fargo building, to help block the wind. But police officers told her she had to move, as the wall was considered private property.

She complied and moved her walker to the sidewalk.

Police let the other demonstrators know which line they were not allowed to cross, and the protest continued peacefully.

Read about other Iowa protests.

Holding signs such as “Water is Life” and “Save Mother Earth,” the demonstrators said they were concerned individuals who wanted to show their opposition to the pipeline.

Ashley Super of Cedar Rapids noted that the attention could result in Wells Fargo pulling out of the pipeline project.

Gail Coleman, also of Cedar Rapids, said she planned to close five accounts she and family members have at Wells Fargo.

“Wells Fargo is a major funder of the Dakota Access pipeline and the pipeline will leak and endanger millions of people,” she said. “To me, you dump DAPL or I’ll dump you.”

See a list of other pipeline lenders and more from today’s protest, below: 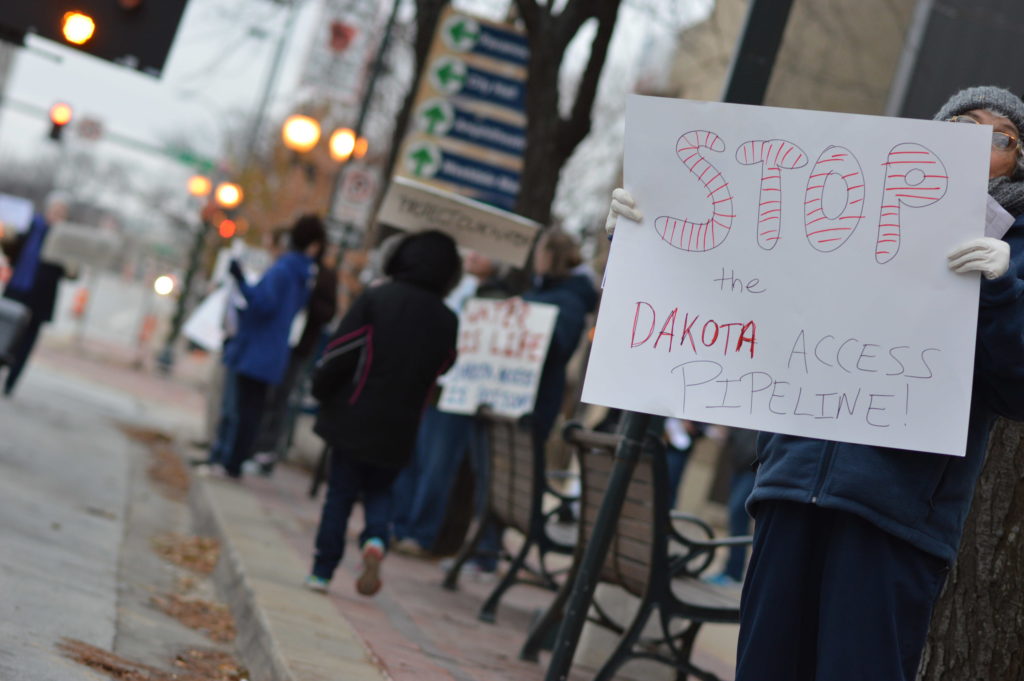 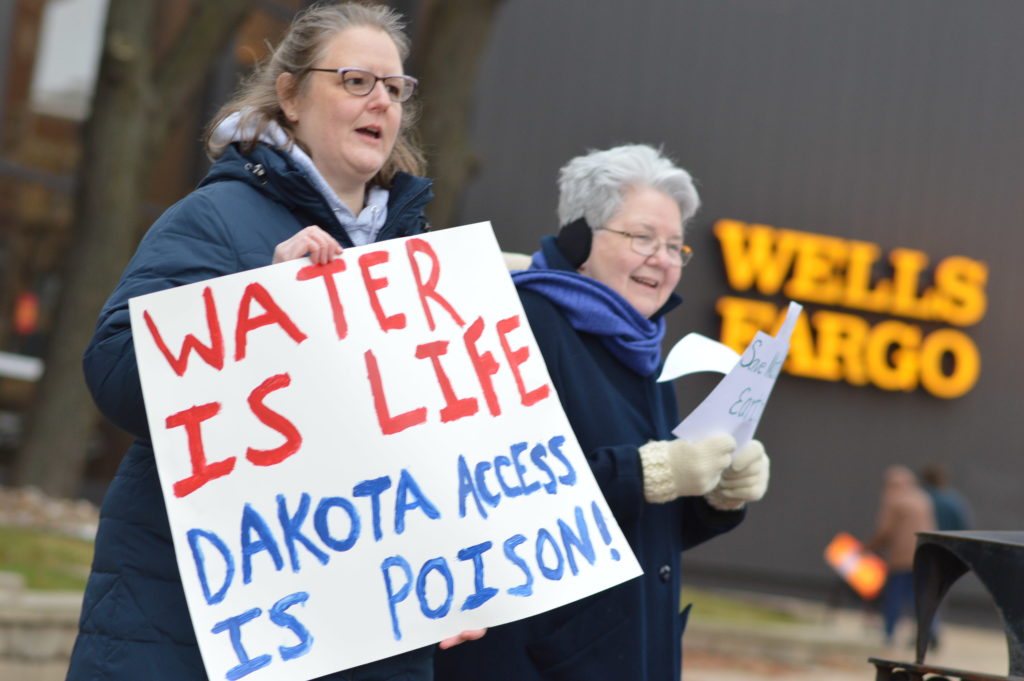 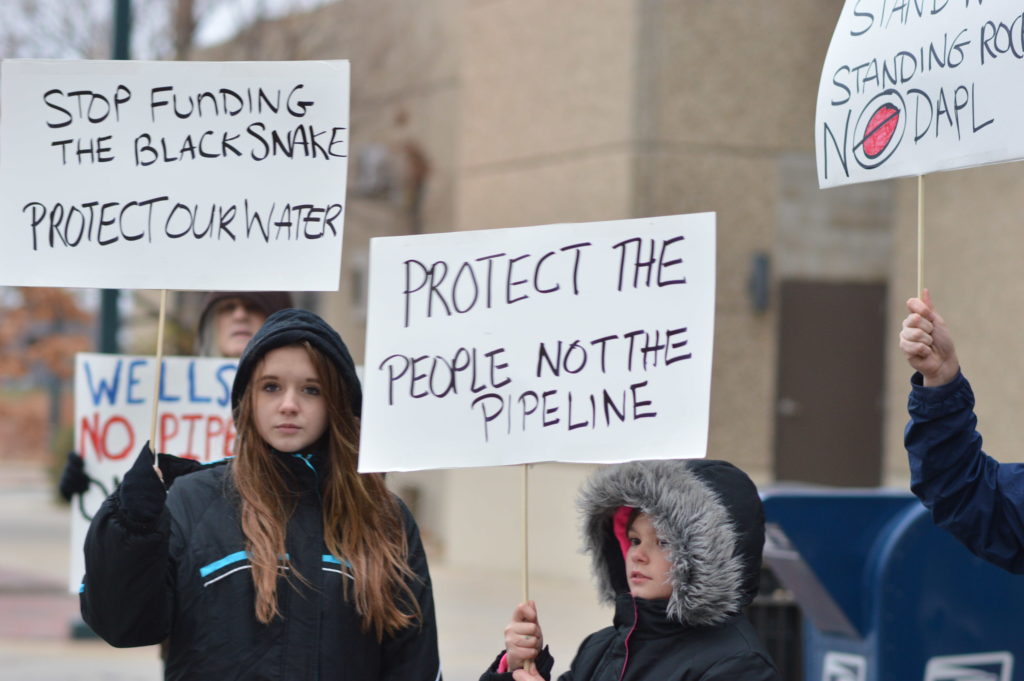 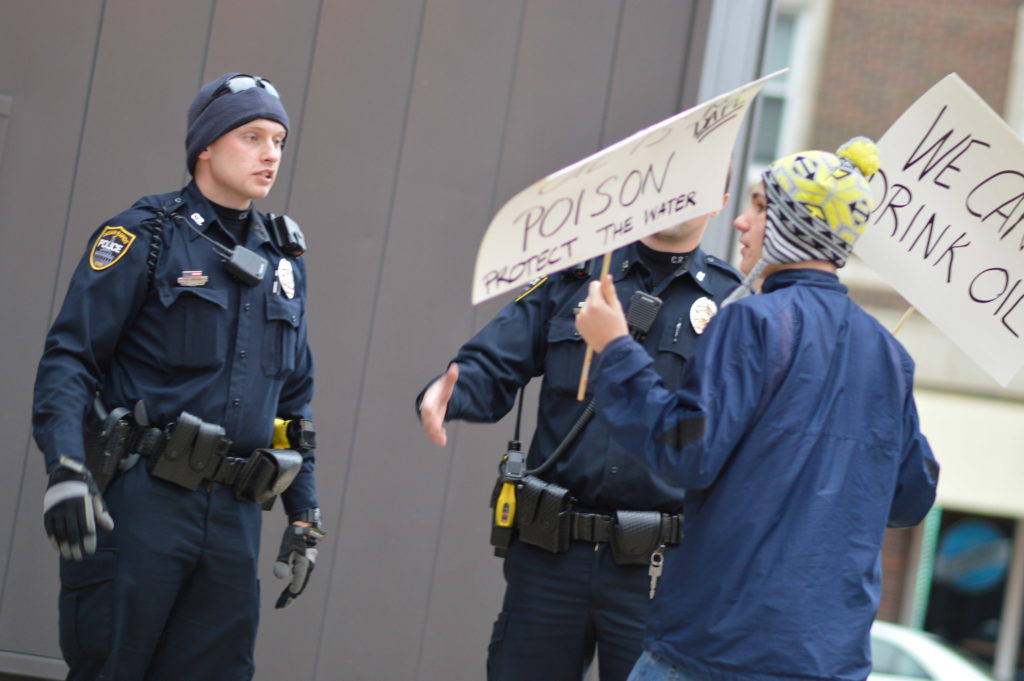 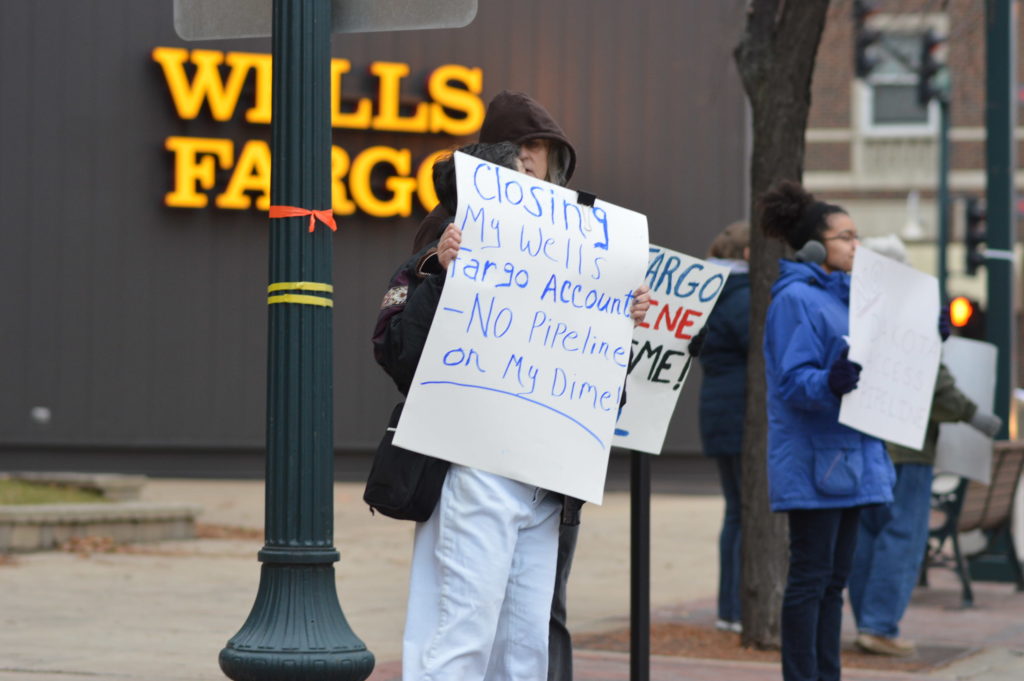 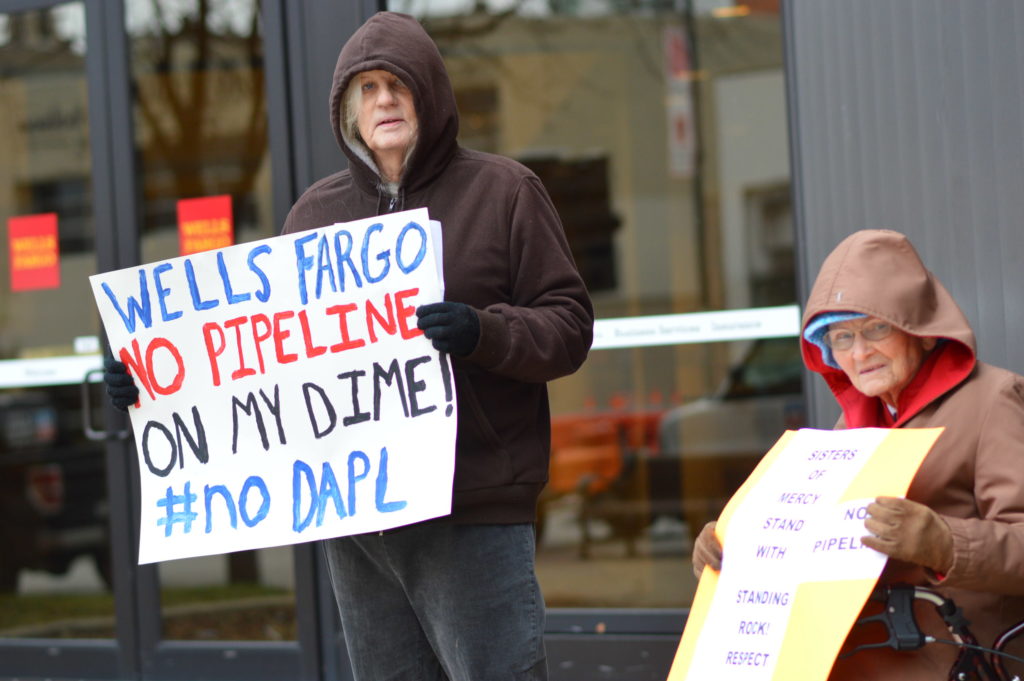 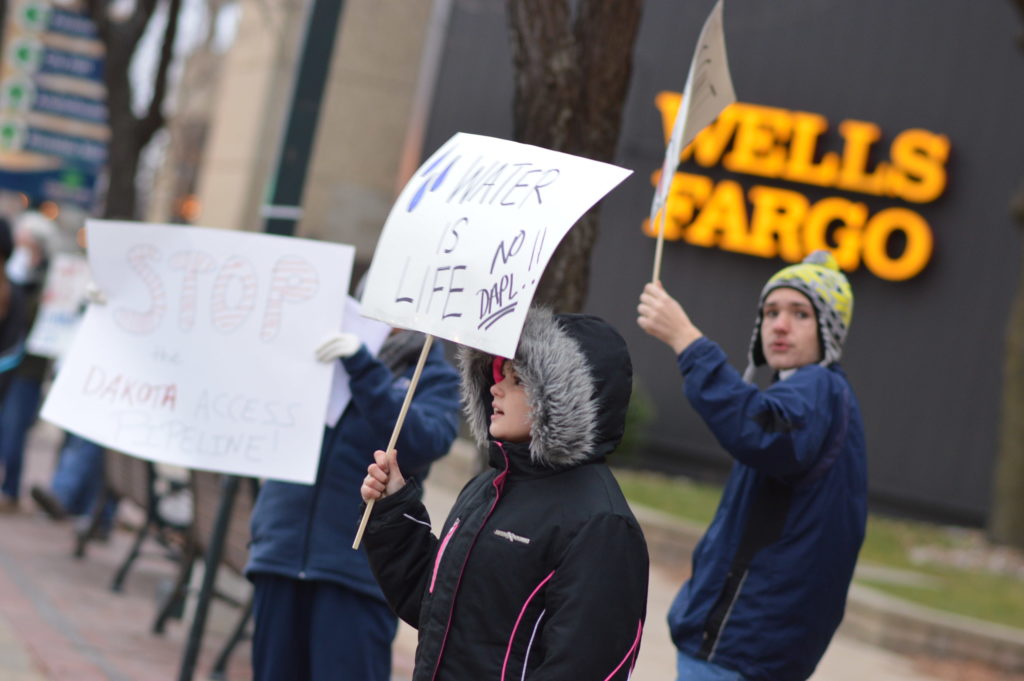