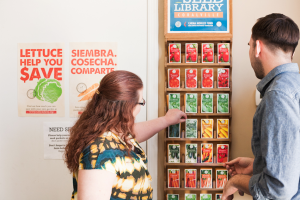 An Iowa food pantry is going beyond giving a hand-out to those in need.

The Coralville Ecumenical Food Pantry, which offers weekly emergency food assistance to Coralville residents, has started a seed library where clients and others in the community can receive free seeds to grow their own food.

“It’s been very successful,” Executive Director John Boller said. “We’re specifically targeting the folks we serve at the food pantry, but we opened it up to everyone and encourage them to donate their excess produce.”

Food pantry visitors were encouraged to take as many packets as they could grow, with more than 1,400 packets distributed, Boller said.

Tomatoes were the most popular seed selection, followed by leafy greens and hot peppers. Those used by residents with no room to garden at home were grown in pots and on windowsills.

Among reaction to the seed library, one gardener commented on the “never-ending supply” of lettuce produced by the seeds, Boller said, while another appreciated the windowsill herbs to add to meals.

He calls the effort “more of a seed hub,” as there is no requirement to collect seeds and return them to the library at the end of the growing season, but new initiatives are under way this year to move in that direction.

Last year, in-depth planting instructions were given to those new to gardening, and Boller hopes to step up those efforts this year by offering classes on seed saving, in addition to hands-on workshops to teach container gardening and more.

“I know it can be really intimidating for people to get started,” he said, adding that as a “city boy,” who gardens, he is learning, too.

Boller, a graduate of the University of Iowa with a degree in social work, has led the food pantry since 2012.

In 2009, six area churches started the Coralville Ecumenical Food Pantry, 203 First St., in response to increasing poverty and hunger in the community.

Its goal is to collaborate with residents, businesses and organizations to end hunger in Coralville, a town of nearly 19,000 people, located between North Liberty and Iowa City.

More than 220 families are served by the food pantry each month, with 15 percent more served in 2014 than the previous year, Boller noted.

The majority of the pantry’s food is purchased from the HACAP Food Reservoir or donated through Table to Table, a local food rescue organization. Food drives also add to the resources, especially in the summer when donations are slower, he said.

The seed library was started as an additional tool to combat hunger, as well as a way to strengthen the local food system by encouraging more people to garden.

Boller knew of other seed libraries throughout the country, including one in Ely, Iowa, but had not heard of any affiliated with a food pantry.

The Ely Seed Lending Library, located in the Ely Public Library, was founded in 2012 to promote the sharing of open-pollinated seeds in Eastern Iowa.

Seeds are borrowed from the library at the beginning of the season, grown, and a portion of the new crop of seeds can be returned for others to use the following year.

Beginning with about 20 users the first year, numbers have tripled since then, said Ali Alldredge, co-founder of the Ely Seed Lending Library.

A crack-down by the state agricultural department in Pennsylvania last year drew attention to the growing trend of seed libraries. The department cited state law that requires seed testing procedures to determine quality and germination rates of donated seeds.

The Sustainable Economies Law Center noted that public access to seeds has been decreasing since a 1980 Supreme Court ruling that a life-form could be patented.

“Since then, big seed companies have shifted away from open-pollinated seeds to patented hybridized and genetically engineered varieties. The companies prohibit farmers from saving and replanting such seeds, requiring that they buy new seeds each year,” the law center stated, adding that, in contrast, seed libraries try to grow the pool of seeds available to everyone.

So far, a similar crack-down hasn’t occurred in Iowa, and the Coralville seed library has only used commercially packaged seeds.

Some of Coralville’s seed packets were donated by Cultivate Iowa, an initiative of the Iowa Food Systems Council to promote food gardening and produce donations. Seed Savers Exchange in Decorah donated others and more were purchased from a grant through the Carma Mohler Fund of the Iowa United Methodist Foundation.

Additionally, volunteers gardened on three community garden plots donated by the city of Coralville, which resulted in about 500 pounds of fresh produce for the food pantry.

Boller said his goal is to start this spring’s seed library with 3,000 packets and encourage more gardeners to donate fresh produce.

“It’s usually the first thing off our shelf,” he said. “People love it.”

Read more about healthy living at: The Radish Magazine