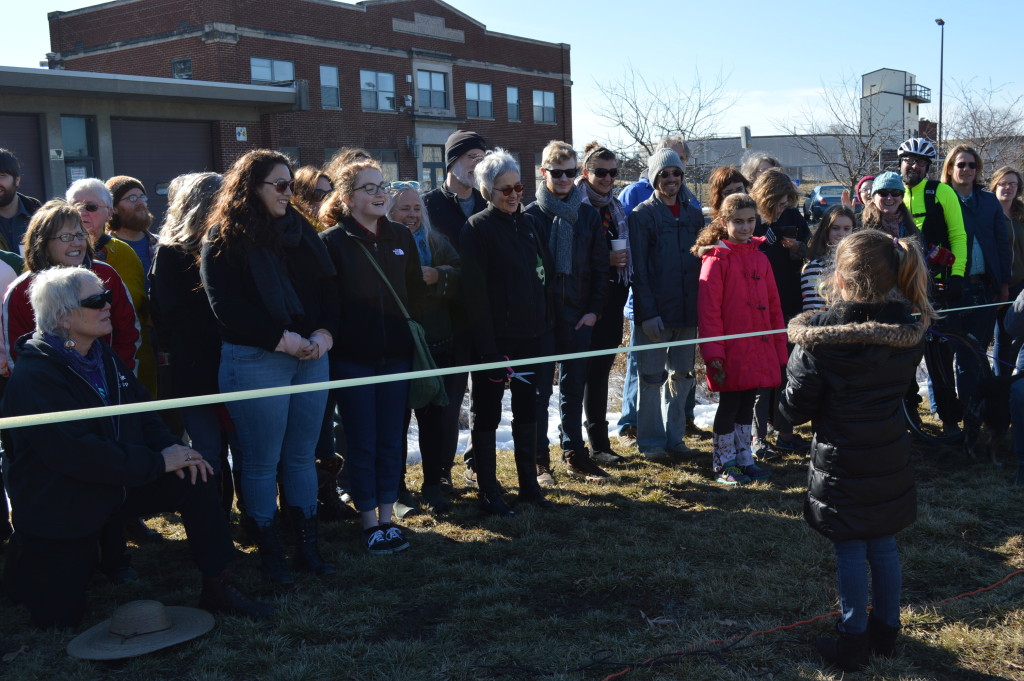 IOWA CITY – It was a ribbon-cutting ceremony unlike any other.

There were crowds, music, refreshments, ribbon and scissors, but the Ecopolis Center that was in the spotlight Jan. 24 in Iowa City sported something that most facilities celebrated with a grand opening do not: a demolition notice on its front door.

“It’s a community movement,” said Jeff Biggers, who serves as Writer-in-Residence at the University of Iowa’s Office of Sustainability, adding that he was not speaking on behalf of the UI. “It’s a very eclectic group.”

That group of local teachers, gardeners, artists, students, business owners and more is focused on plans Iowa City is formulating for a new riverfront park that will serve as the gateway to the Riverfront Crossings area.

At its center, according to Ecopolis supporters, is the former North Wastewater Treatment Plant Control House, 1000 S. Clinton St., which the city slated for demolition after the plant was flooded in 2008. 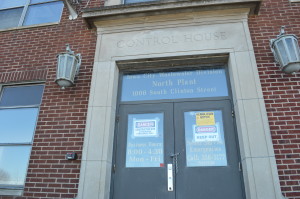 A demolition notice is shown posted on the Control House of the North Wastewater Treatment Plant in Iowa City. (photo/Cindy Hadish)

No one entered the solid brick building during the grand opening, but Biggers noted that the structure is sound. Built in 1935 as a Public Works Administration project, the building is eligible for the National Register of Historic Places, he said.

Supporters envision the building as a public center of the arts and regenerative urban planning, featuring edible landscapes, urban farms and food, bikes and walking trails, kayaking and recreation along the Iowa River, solar energy and other city initiatives.

“Let’s make it an incubator for ideas,” Biggers said, calling the building an anchor for the new riverfront park. “We want this to be a demonstration site. We don’t need another place with grass to play Frisbee.”

Sue Kann brought her daughter to Saturday’s ribbon-cutting, saying she supports the ideas being proposed, and in particular, the arts aspect of the center.

As the owner of The Arts and Crafts Place, Kann said she would welcome the center as another place to teach.

Fred Meyer, director of the Iowa City-based nonprofit, Backyard Abundance, said the site also could be a source of free food for Iowa City residents, as well as wildlife.

The group is holding a series of Ecopolis forums at the public library to discuss sustainable infrastructure, including solar energy and edible landscaping.

Both Meyer and Biggers encouraged residents to attend a community planning event hosted by the city of Iowa City to gather public input on proposals to improve the Iowa riverfront and transform the former North Wastewater Treatment Plant area into a new riverfront park.

The meeting will be 6 to 8 p.m. Wednesday, Jan. 28, at the Park Lodge at Terry Trueblood Recreation Area, 579 McCollister Boulevard.

Planning consultants will give a presentation highlighting proposals for floodplain, stream and riverbank restoration; wetland creation; hazard mitigation solutions near the Burlington Street dam; riverfront trails and design concepts for the new park.

An open house/public input session will follow the presentation.

Biggers noted that Ecopolis supporters have been in contact with city staff about their ideas.

He cited Iowa City as a city of literature, climate action, renewable energy, walkability and more.

“If we can’t do it here, I don’t know where we can do it,” Biggers said. “We just feel like the moment is right for this. We’re going to build the dream and the city will come.” 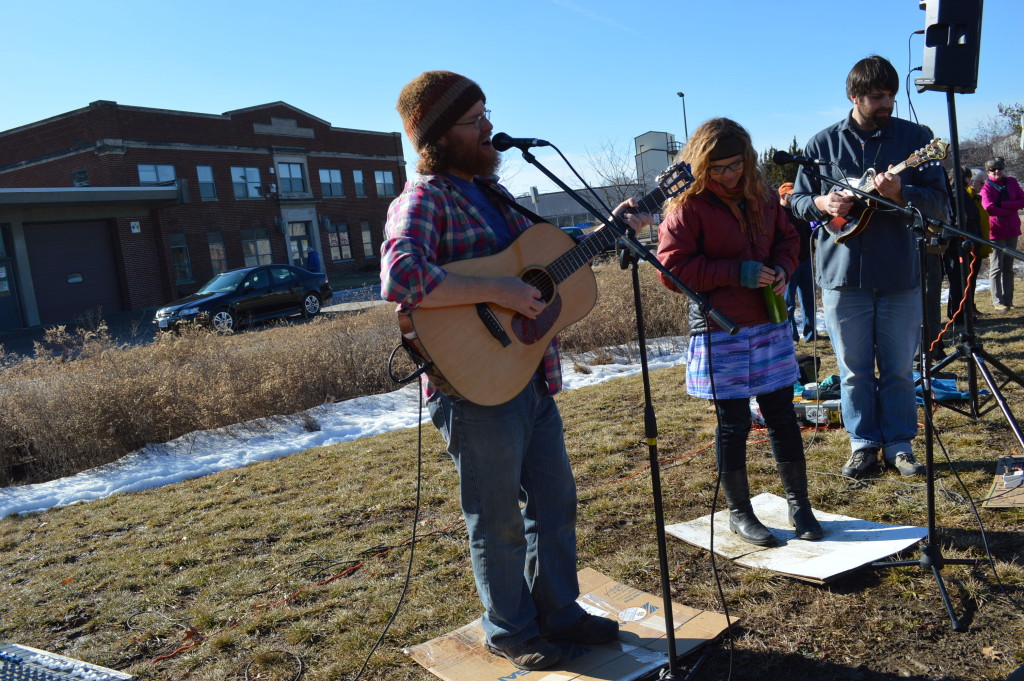 The Feralings perform Saturday, Jan. 24, 2015, during a ribbon-cutting celebration at the Ecopolis Center in Iowa City. (photo/Cindy Hadish) 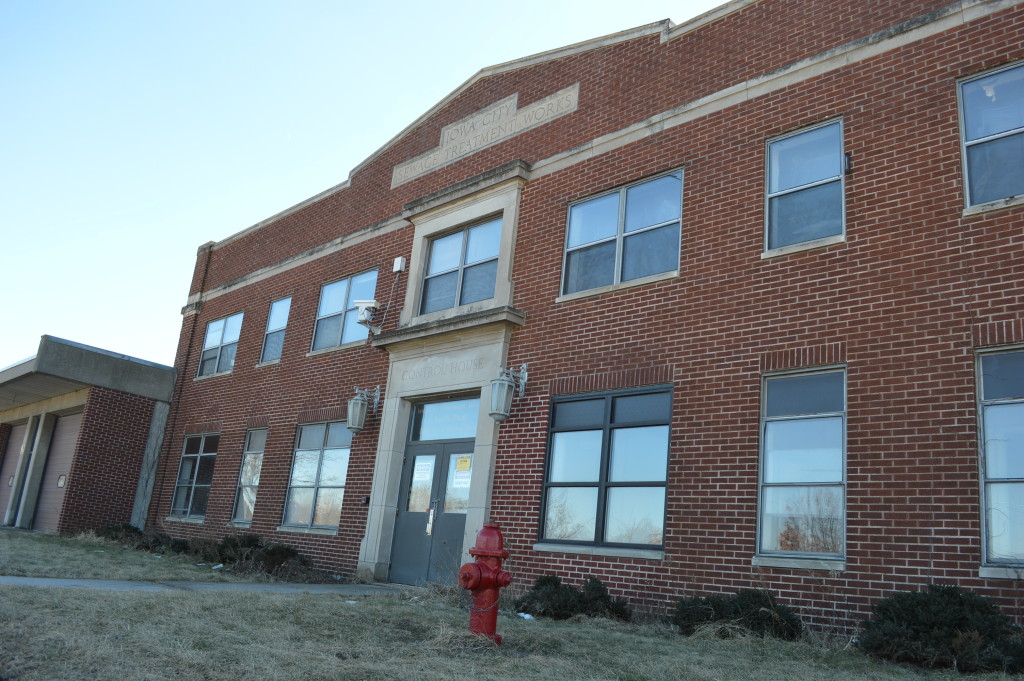 The North Wastewater Treatment Plant Control House is shown on Saturday, Jan. 24, 2015, in Iowa City. Supporters would like the building to become a center for the arts, regenerative urban planning and more. (photo/Cindy Hadish)