Wildlife encounter: “stand still and talk to the bear in a calm voice” 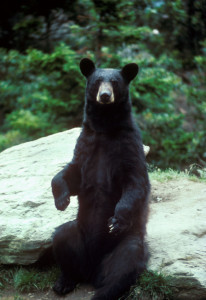 Iowans typically don’t have to worry about a bear encounter in the state.

While bear sightings have been reported occasionally, they’re generally rare and the Iowa Department of Natural Resources notes that no wild bear cubs have been in Iowa for at least 140 years. Until now.

The DNR reported today that a landowner in Clayton County saw what appeared to be a female bear with her two cubs. This came after a report from a beekeeper whose hives were torn up, possibly from the bear trio.

What to do if you encounter a bear? Read on for advice from the DNR:

WADENA — The Iowa Department of Natural Resources has confirmed tracks and scat left near Clayton County beehives came from a black bear.

A DNR wildlife depredation biologist responded to a report from a beekeeper south of Wadena, near the Clayton-Fayette county line, who had found his beehives torn up. The DNR found bear scat within 25 feet of the hives. Another nearby landowner reported tracks, which were also confirmed by the DNR. That same landowner reported that he had seen a bear, which he estimated to be a female around 200 pounds, as well as two cubs. The DNR is continuing to investigate and more work is being done to confirm the size or number of bears.

The DNR encourages people to leave the bears alone and to not feed them.

“Wild bears generally avoid people, keeping to themselves and moving along,” said Vince Evelsizer, DNR furbearer and wetland biologist. “That said, we do want people to know there is one around, and we encourage them to give the bear its space – don’t harass or follow the bear, especially if do we have a female bear with cubs.”

If there are cubs, they would be the first cubs documented in Iowa in more than 140 years. Although once native to Iowa, black bears have not had wild populations in the state since the 1800s.

If a bear is encountered, people are advised to:

• Remain calm. Do not run. Stand still and talk to the bear in a calm voice

• Do not try to get closer to the bear

•If the bear does not get closer to you, slowly back away, talking to the bear in a quiet, monotone voice. Do not scream, turn your back on the bear, run, kneel down or make direct eye contact

• Watch the bear and wait for it to leave

• If the bear does not leave or approaches you, yell and wave your arms to make yourself look bigger. Throw objects, blow a whistle or an air horn. The idea is to persuade the bear to leave

•If you are with others, stay together and act as a group. Make sure the bear has a clear escape route

• If the bear keeps advancing, and is getting close, stand your ground. Use bear pepper spray or anything else you can find or use to threaten or distract the bear

• Do not run or climb a tree