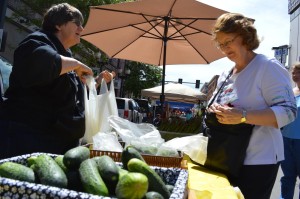 Cucumbers were among the greenhouse produce sold by Meow Acres of Grundy Center. The SNAP program has encouraged access to farmers markets, but will it ban pop? (photo/Cindy Hadish)

I’ve been among those baffled by the use of our nation’s food safety net to allow the purchase of junk food and pop. That isn’t changing any time soon, but word from the American Medical Association is encouraging.

The Supplemental Nutrition Assistance Program, or SNAP, formerly known as food stamps, has made efforts to increase access to farmers markets, which I applaud. Doing so improves the availability of fresh fruits and vegetables to low-income populations who need better access to those foods. We all need to eat more fresh produce, but   people with lower incomes have greater obstacles to surmount, including cost.

At this week’s AMA meeting, the nation’s largest physician organization announced the adoption of a new policy, which addresses at least one portion of SNAP. Whether or not it will lead to changes in the program remains to be seen.

Here is this week’s statement from the AMA:

Eligibility of Sugar-Sweetened Beverages for SNAP
Millions of Americans from low-income households receive assistance from the Supplemental Nutrition Assistance Program (SNAP). Studies have shown that sugar-sweetened beverages account for 58 percent of beverages purchased under SNAP. Consumption of sugar sweetened beverages is associated with weight gain and a higher risk of future obesity in children. New AMA policy passed today calls on the AMA to work to remove sugar-sweetened beverages from the SNAP program and encourage state health agencies to include nutrition information in routine materials sent to SNAP recipients.

Last year, 45 million low-income Americans used SNAP benefits in any given month. I think it’s interesting that nearly any type of food sold, except hot foods and hot drinks, can be purchased at farmers markets.

Also of note are the other policies adopted by the AMA during its annual meeting in Chicago, including support of a ban to market energy drinks to children. The group also recognized potential risks of prolonged sitting and encourages employers to make alternatives available, such as standing work stations; something I promoted at my previous work place.

“While the passage of GINA created important legal protections against genetic discrimination, the law leaves patients vulnerable to discrimination in areas such as life, long-term care and disability insurance,” said AMA Board Member William Kobler, M.D. “Genomic medicine advancements are enabling better individualized patient care, but it is important to make sure that this unique personal information is not used against patients.”

SUPPORT OF PUBLIC ACCESS TO GENETIC DATA
The AMA today adopted policy that encourages companies, laboratories, researchers and providers to publicly share data on genetic variants and the clinical significance of those variants through a system that assures patient and provider privacy.

“On the heels of the U.S. Supreme Court decision that genetic information is not patentable, this policy urges collaboration and data sharing with privacy protections to advance genomic medicine,” said Dr. Kobler. “Genetic analyses done collectively with the ability to compare genetic variants and analysis will allow researchers and health care professionals to more quickly identify and adopt advances in genomic medicine to benefit patients.”

PHARMACY COMPOUNDING SAFETY
Traditional pharmacy compounding involves the act of combining, mixing or altering ingredients to prepare a customized medication for an individual patient. However, the compounding industry has evolved over the past 20 years to include high capacity, industrialized practices involving batch production. The AMA today adopted new policy recommending that traditional compounding pharmacies be subject to state board of pharmacy oversight. It also supports FDA oversight and regulation of facilities that compound sterile drug products without receiving a prescription order prior to compounding and introducing these drugs into interstate commerce.

“As the recent meningococcal outbreak linked to non-sterile injectables illustrates, there are real concerns about the safety of pharmacy compounding practices,” said Dr. Kobler. “Expanding oversight and regulation of these compounding practices will help better protect public health and ensure patient safety and access.”

OPPOSITION TO THE LIFETIME BAN ON BLOOD DONATIONS FOR GAY MEN
Today, the AMA adopted policy opposing the FDA’s current lifetime ban on blood donations from men who have sex with men. The policy also expresses support for the use of rational, scientifically-based deferral periods that are fairly and consistently applied to blood donors.

“The lifetime ban on blood donation for men who have sex with men is discriminatory and not based on sound science,” said Dr. Kobler. “This new policy urges a federal policy change to ensure blood donation bans or deferrals are applied to donors according to their individual level of risk and are not based on sexual orientation alone.”

HIV TREATMENT AS PREVENTION
Recent studies have confirmed that effective antiretroviral therapy can reduce HIV transmission by up to 96 percent. Previously, antiretroviral therapy for infected persons was delayed for years until CD4 cell counts dropped significantly and transmission occurred. Although new NIH guidelines recommend immediate antiviral treatment, these guideline changes have not been widely publicized to physicians. New policy adopted by the AMA today supports programs to raise physician awareness of early treatment and “treatment as prevention” and the need to link newly positive persons to clinical care and partner services.

“Research and new guidelines support immediate antiviral treatment for those at risk for HIV infection, and this policy will help physicians to provide the best possible care for their at-risk patients,” said Dr. Kobler.

OBESITY AS A DISEASE
Today, the AMA adopted policy that recognizes obesity as a disease requiring a range of medical interventions to advance obesity treatment and prevention.

“Recognizing obesity as a disease will help change the way the medical community tackles this complex issue that affects approximately one in three Americans,” said AMA board member Patrice Harris, M.D. “The AMA is committed to improving health outcomes and is working to reduce the incidence of cardiovascular disease and type 2 diabetes, which are often linked to obesity.”

BANNING MARKETING/SALE OF ENERGY DRINKS TO KIDS
Stimulant drinks have surged in popularity in recent years, especially among high school and college students, and health advocates are concerned about the use of these drinks among adolescents due to excessive amounts of caffeine. The FDA is continuing to investigate reports of illness, injury or death of people who drank products marketed as “energy drinks” or “energy shots.” The AMA today adopted policy supporting a ban of the marketing of high stimulant/caffeine drinks to adolescents under the age of 18.

“Energy drinks contain massive and excessive amounts of caffeine that may lead to a host of health problems in young people, including heart problems, and banning companies from marketing these products to adolescents is a common sense action that we can take to protect the health of American kids,” said AMA board member Alexander Ding, M.D.

HEALTH RISKS OF SITTING
Today, the AMA adopted policy recognizing potential risks of prolonged sitting and encouraging employers, employees and others to make available alternatives to sitting, such as standing work stations and isometric balls.

“Prolonged sitting, particularly in work settings, can cause health problems and encouraging workplaces to offer employees alternatives to sitting all day will help to create a healthier workforce,” said Dr. Harris.

“Students shouldn’t need to get a note from their physician in order to protect themselves from sun damage while they are at school,” said Dr. Ding. “Even just a few sunburns can increase a child’s risk of skin cancer later in life, and they should be able to apply and reapply sunscreen at school.”

EXAM ROOM COMPUTING & PATIENT-PHYSICIAN INTERACTIONS
New AMA policy asks the AMA to provide physicians resources for effectively using computers and electronic health records (EHRs) in patient-physician interactions and encourages physicians to incorporate questions regarding use of computers and EHRs in patient-satisfaction surveys to provide feedback on how their patients experience the use of computers in the examination room.

“Our board report looked at the effect of electronic health records on interactions between patients and physicians and found that the perspective and skills physicians bring to using computers determines whether the response to their introduction in the exam room will be positive or negative,” said AMA Board Chair Steven Stack, M.D. “We look forward to gathering more information to help physicians best incorporate this new technology into their interactions with patients.”