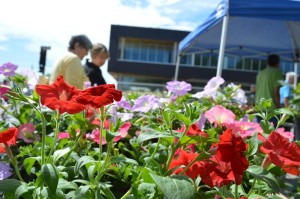 If you’re itchin’ for a taste of summer, you’re in luck.

The Downtown Farmers Market in Cedar Rapids kicks off this season on Saturday, June 7, 2014, and a preview of what you will find there is now available.

An Interactive Market Guide offers a map of the more than 200 vendors, along with descriptions of their products and other info about the market, including parking and pet rules.

The market will run from 7:30 a.m. to noon with a slightly adjusted site, between Second and Third avenues and Second and Fifth streets SE, due to construction on Fourth Avenue.

A free trolley service will be running between downtown and the NewBo City Market.

Bring your bug spray to guard against any potential gnat-attacks (so the summer itch doesn’t turn real) and see more about the first market from the Cedar Rapids Metro Economic Alliance:

The City of Cedar Rapids will ring the opening bell as the Presenting Day Sponsor. City vehicles will be on display around Greene Square Park, city services will be promoted throughout the market venue, and a special Citizens Appreciation ceremony will be held on the Main Stage at 10:20 a.m.

The Downtown Farmers’ Market is produced by the Economic Alliance. Markets are held 7:30 a.m. to noon on the first and third Saturday, June – September.

A reminder to downtown businesses: the block of Second and Third Avenues between Second and Fifth Streets SE will close at 5 a.m. for every market, and will reopen at 1 p.m.

Find the dates of the downtown markets and more than 50 others here and read more about the Downtown Farmers Market on the CR Metro Economic Alliance website.