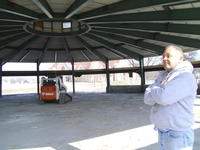 Alex Andersen is shown inside the Riverside Roundhouse as he began the deconstruction process to save the building after the 2008 flood. (photo/Cindy Hadish)

CEDAR RAPIDS — The Riverside Roundhouse could make a comeback, and with it, a return of farmers markets to Czech Village.

The roundhouse, built in 1962 and used for farmers markets until 2007, was deconstructed after the 2008 flood by volunteers, led by Alex Andersen, owner of Ernie’s Tavern.

Since then, the building has been in limbo while the pieces remained in storage.

Proceeds from the market will go toward reconstructing the roundhouse in a different location, behind Ernie’s Tavern, 69 16th Ave. SW, Bell said.

Its previous location is now the site of the National Czech & Slovak Museum & Library, which was moved to a higher elevation, away from the Cedar River, and expanded after the 2008 flood.

Czech Village merchants, who saw a portion of their customer base removed when the city demolished dozens of homes next to the business district after the flood, have long discussed seeing a return of the market, along with its customers. 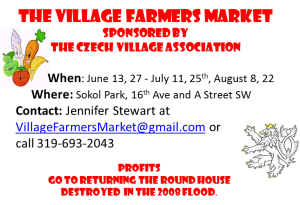 Market Manager Jennifer Stewart said markets will begin in June at Sokol Park, at 16th Avenue and A Street SW.

The markets will be on Saturdays when there is no Downtown Farmers Market scheduled, she noted.