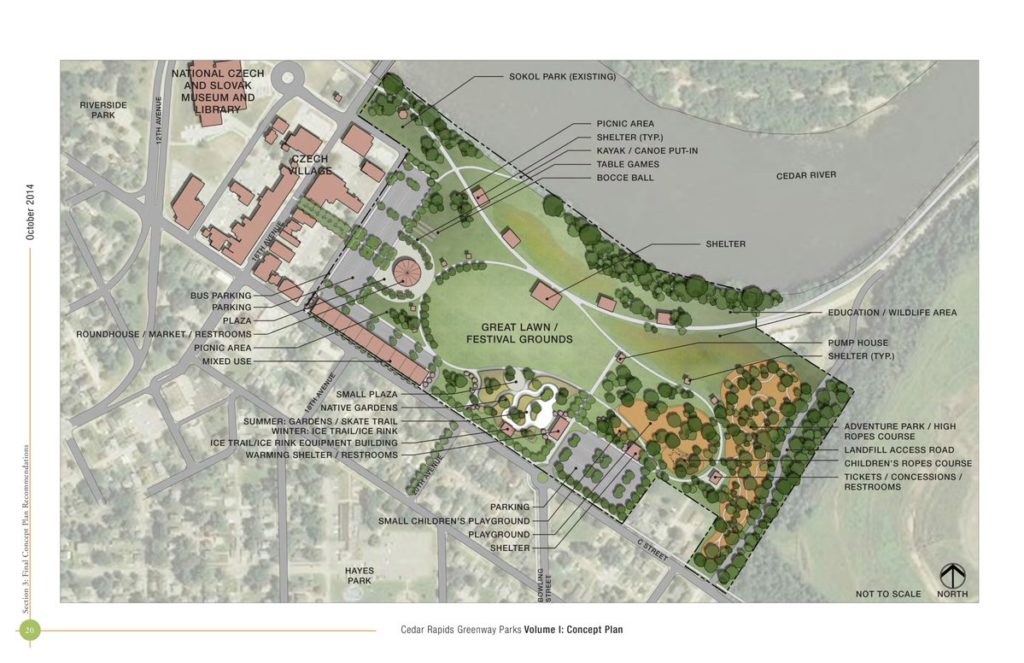 The city of Cedar Rapids greenway parks plan includes the rebuilt Roundhouse Market next to Czech Village, where homes were located before the 2008 flood.

CEDAR RAPIDS – Flood recovery will come full-circle when the Riverside Roundhouse is restored in Czech Village.

Supporters of the effort, led by the non-profit Friends of Czech Village, have launched with an aggressive goal: to rebuild the Roundhouse in time to reopen on June 13, 2018, the 10th anniversary of the 2008 flood that devastated the district. 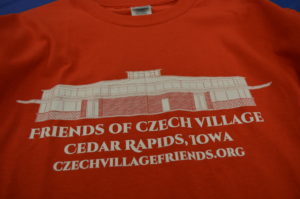 Friends of Czech Village will launch a fundraising campaign to rebuild the Roundhouse Market in Cedar Rapids.

The structure was dismantled and the steel framework put into storage after the flood, while the National Czech & Slovak Museum & Library was moved to higher ground where the Roundhouse once stood.

Plans call for the circular building to be located in a new site on city-owned land, behind 17th Avenue SW, along what had been B Street SW.

After the 2008 flood, the city cleared that area of dozens of homes that once were an integral part to the vitality of Czech Village. Several business owners have long sought to have the Roundhouse restored to regain some of the foot traffic that farmers markets and other events brought to the neighborhood. 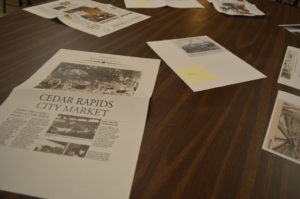 Copies of newspaper articles note the history of the Riverside Roundhouse, site of the Cedar Rapids City Market.

While the city is supportive of those efforts, no city funding has been committed toward that goal, Bell said, so the group is seeking grants and private donations.

A good portion of the cost – about $250,000 – would go towards having a commercial kitchen in the building; something the Roundhouse previously did not have, but was in the structure’s original plans. Required flood-proofing also carries a hefty cost.

Steve Shriver, co-owner of Brewhemia and Eco Lips in New Bohemia and who recently purchased the Artisan’s Sanctuary building in Czech Village, noted that the city has a 25-year plan for the greenway park next to Czech Village, so the group’s efforts will help jump-start that revitalization.

Designed by Leo Peiffer & Associates, the city built the Roundhouse in 1962 to offer an indoor location for farmers markets and other events. It officially opened in September 1963 and quickly became a popular spot for both market vendors and customers seeking fresh fruits and vegetables, plants, handcrafted items, jams and jellies, kolaches and more.

In 2015, the Czech Village Association began small fundraising efforts, with proceeds from a neighborhood farmers market put toward rebuilding the Roundhouse.

Friends of Czech Village, a separate group with the singular goal of rebuilding the Roundhouse, was formed in 2016. The group is working on fundraising efforts and approving a building design.

Bell noted that the Roundhouse would offer farmers markets on weekends when the large-scale Downtown Farmers Market is not scheduled and would complement the NewBo City Market, across the Cedar River. 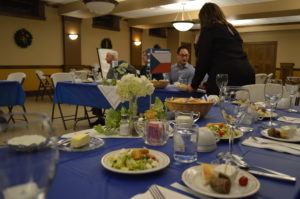 With 8,000-square-feet, the Roundhouse, which would have windows rather than the rolled metal coverings used in the past, could be used for wedding receptions, art shows, multi-cultural festivals and other events, in addition to the markets.

Friends of Czech Village met with a dozen supporters last week at Café 361 and plans more outreach efforts throughout Cedar Rapids in the near future.

The goal is to launch a fundraising campaign in June and begin building in spring 2018. Donations are being accepted on the group’s website at: Czechvillagefriends.org

Bell said construction would likely take only a few months.

To find out about future meetings or to join the group’s efforts, email Bell at: info@czechvillagefriends.org

See what the placement of the rebuilt structure could look like in the city’s plans: roundhouse rendering 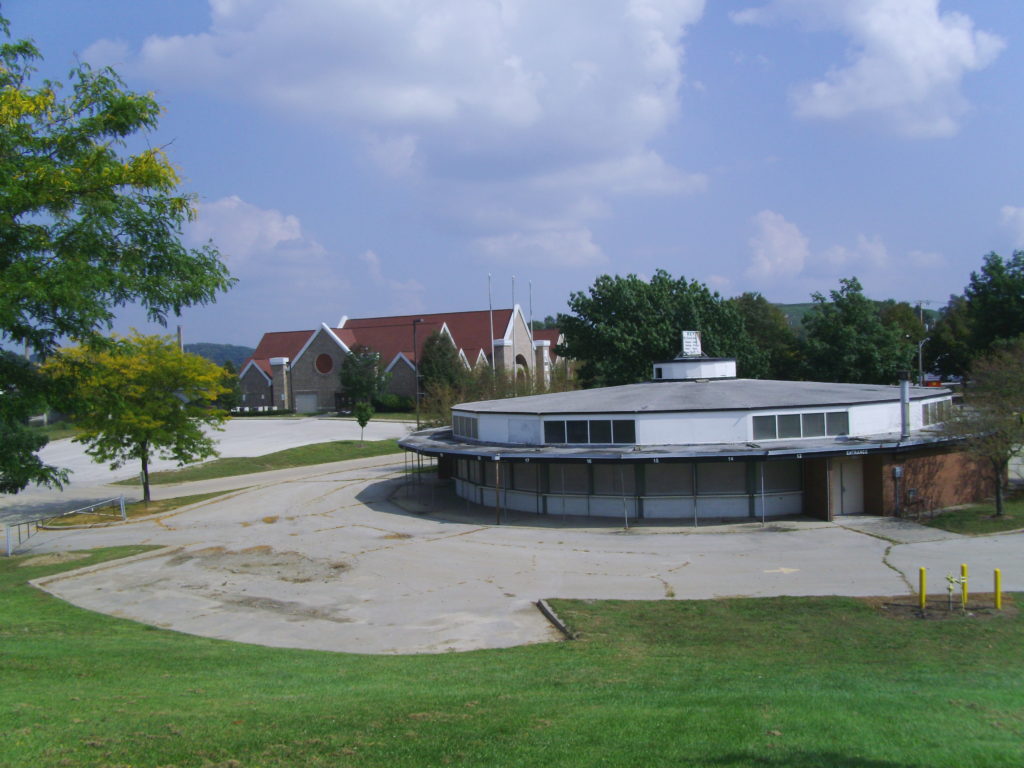 The Riverside Roundhouse, a longtime home to the Cedar Rapids City Market, was dismantled after the 2008 flood to make way for the relocation of the National Czech & Slovak Museum & Library, shown in the background. (photo/Cindy Hadish)