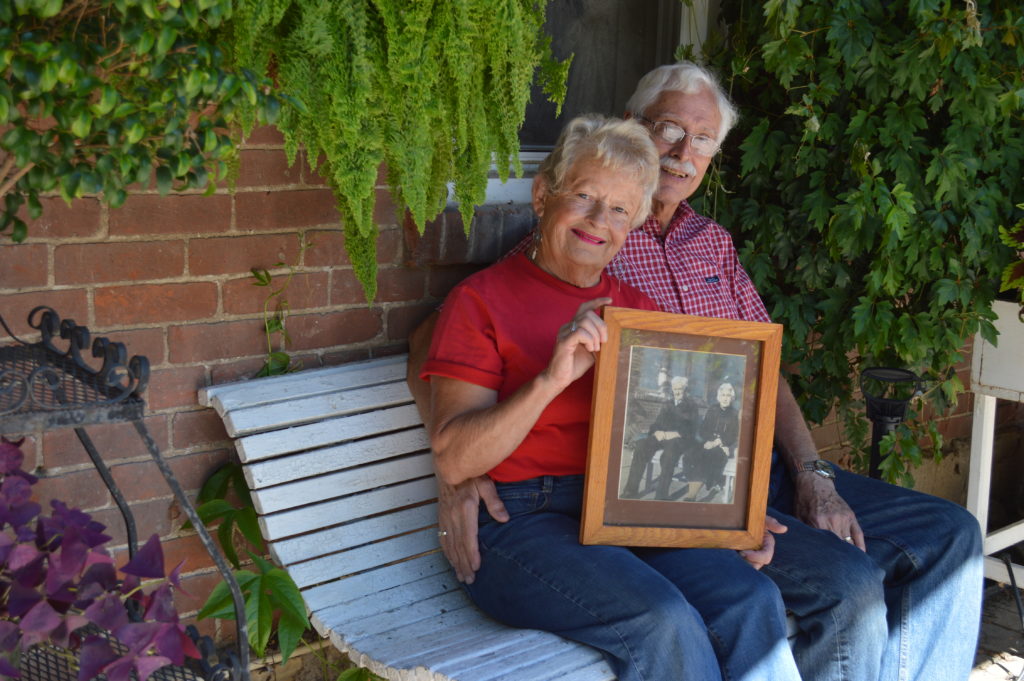 Wilma and Larry Rettig sit on the same white bench on which her late grandparents were photographed on their 50th wedding anniversary, outside of their home in South Amana. A hanging ‘Fluffy Ruffles’ fern, next to Wilma, and oak leaf ivy (Cissus rhombifolia) next to Larry, are among the plants that grow outside the brick house. (photo/Cindy Hadish for Iowa Gardener magazine)

SOUTH AMANA – Visitors to Cottage-in-the-Meadow Gardens can take a step back in time. A 1900 brick house anchors the site in South Amana, one of the seven Amana villages in Eastern Iowa, listed on the National Register of Historic Places. 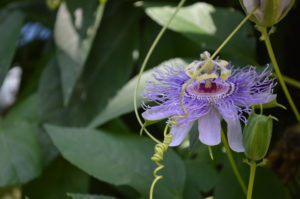 Passion flower vines bloom along a trellis at the home of Larry and Wilma Rettig in South Amana, Iowa. (photo/Cindy Hadish)

Cottage-in-the-Meadow in itself is a rarity, with a listing in the Smithsonian Institution’s Archives of American Gardens. A century-old vegetable garden, fern beds that date to the early 1900s, Flanders poppies (Papaver rhaeas) brought to the colonies from fields in Flanders, Belgium, by World War I volunteers and a heritage orchard are among the garden’s historic features.

Vegetable gardening was a vital component to the communal society, founded in the 1850s by German immigrants. Young women began working in the gardens in their teens to help provide food for the community’s members. Although the communal era ended in 1932, Larry and Wilma Rettig have kept some of the traditions alive.

The couple, natives of Amana who met “at the blue table” in kindergarten, maintain some of the site’s original plants and harvest seeds used in a seed bank that preserves vegetable varieties brought from Germany. The vegetable gardens, bordered by a more than century-old asparagus bed, command Wilma’s attention, while Larry dedicates his time to the 300-plus varieties of flowers, trees and shrubs interwoven throughout their nearly 1-acre property. 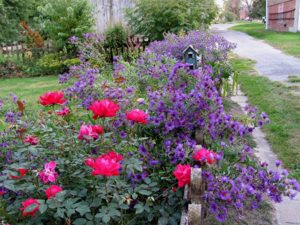 Red Knock Out roses and purple New England aster (Symphyotrichum novae-angliae) bloom through the west section of the cottage garden fence, adjacent to the public walkway at the home of Larry and Wilma Rettig in South Amana. (photo/Larry Rettig)

Kiwis grow on a vine and an exotic mimosa tree (Albizia julibrissin,) a plant not typically hardy in Iowa, blooms pretty in pink. Larry carefully tends the plants, which are helped along in microclimates within each outdoor “garden room” on the property. In addition to the brick house, a restored daycare cottage, built in 1869, and other small buildings offer protection by blocking the wind. A working cistern that collects rainwater from the rooftops provides water for the many potted plants.

Much of the hardscape, including stones collected in the 1940s and 1950s by Wilma’s mother that line a flower bed, retains its original form. Trellising, originally for grapes, and a rabatte, or raised bed, are among other early features. Every bed was meticulously measured and each plant documented for the garden’s listing in the Smithsonian.

Organic and no-till methods are practiced in the vegetable garden, which includes heirloom varieties such as egg lettuce, black salsify (Scorzonera hispanica) and ground cherries (Physalis) from which Wilma carefully collects seeds, in addition to canning and otherwise processing the food.

The Rettigs welcome visitors to their gardens, but ask that they call ahead. See more at: cottageinthemeadow.plantfans.com

Read about other great Iowa gardens: 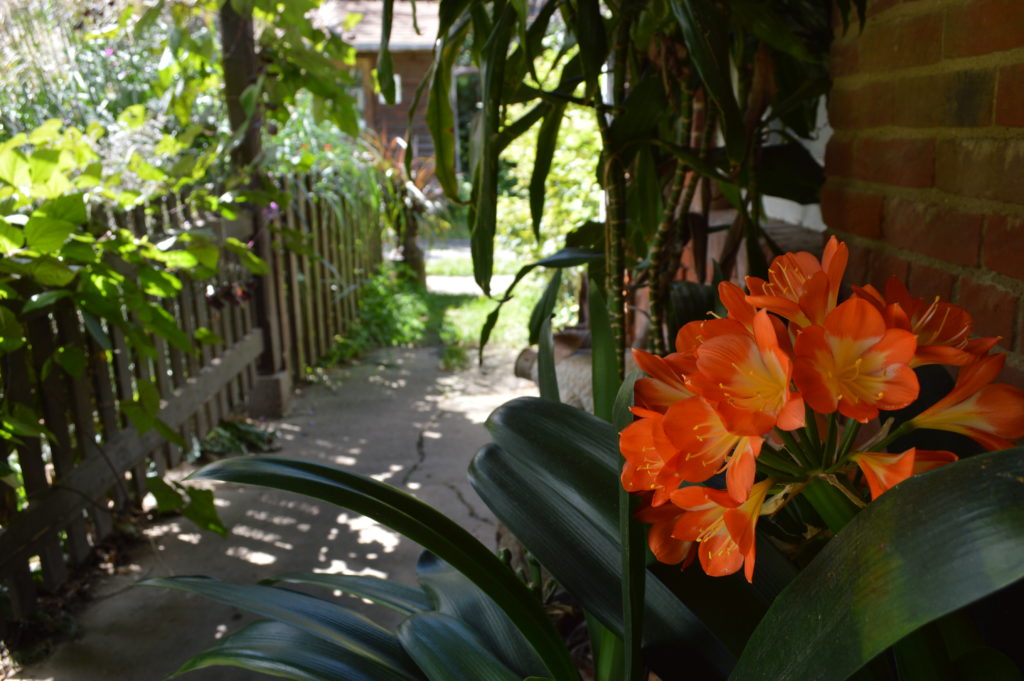 A clivia plant provides a shock of orange blossoms alongside the cottage, a former Amana daycare center, at Cottage-in-the-Meadow Gardens in South Amana. Hyacinth bean vine, (Lablab purpurea) at left, climbs along the wooden fence. (photo/Cindy Hadish for Iowa Gardener) 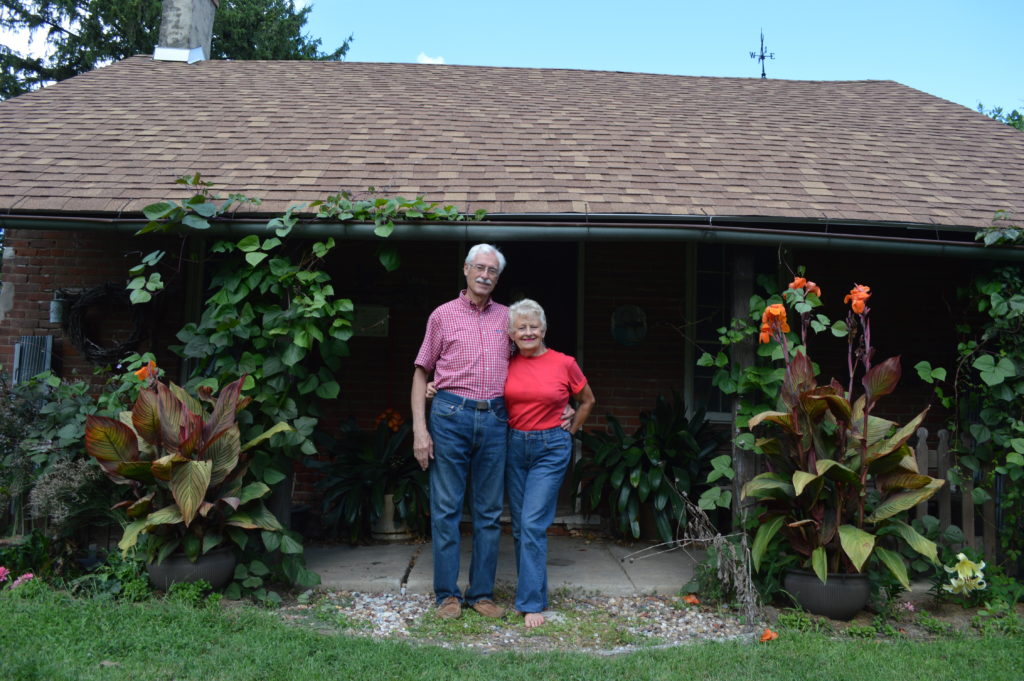 Larry and Wilma Rettig are shown Aug. 21, 2016, in front of a restored daycare cottage, built in 1869, at Cottage-in-the Meadow Gardens in South Amana, Iowa. (photo/Cindy Hadish) 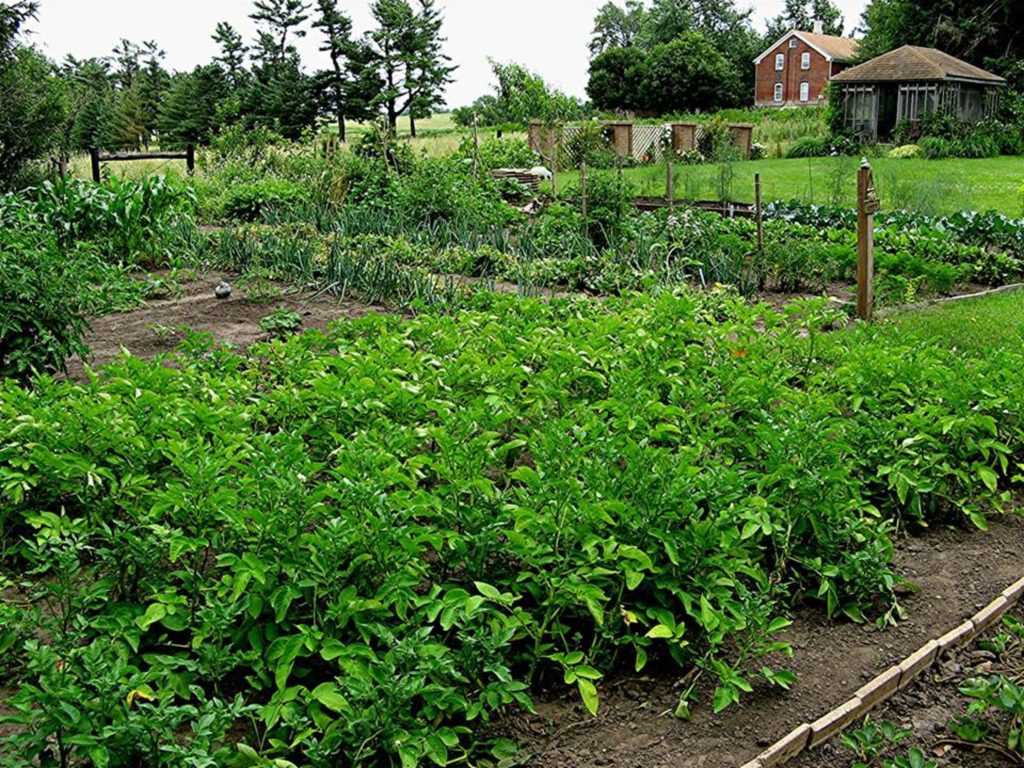 Potatoes, corn, tomatoes and onions are among the plants growing in the vegetable garden at Cottage-in-the-Meadow Gardens in South Amana. Vegetable gardens were vital in feeding the former communal society in Eastern Iowa. (photo/Larry Rettig) 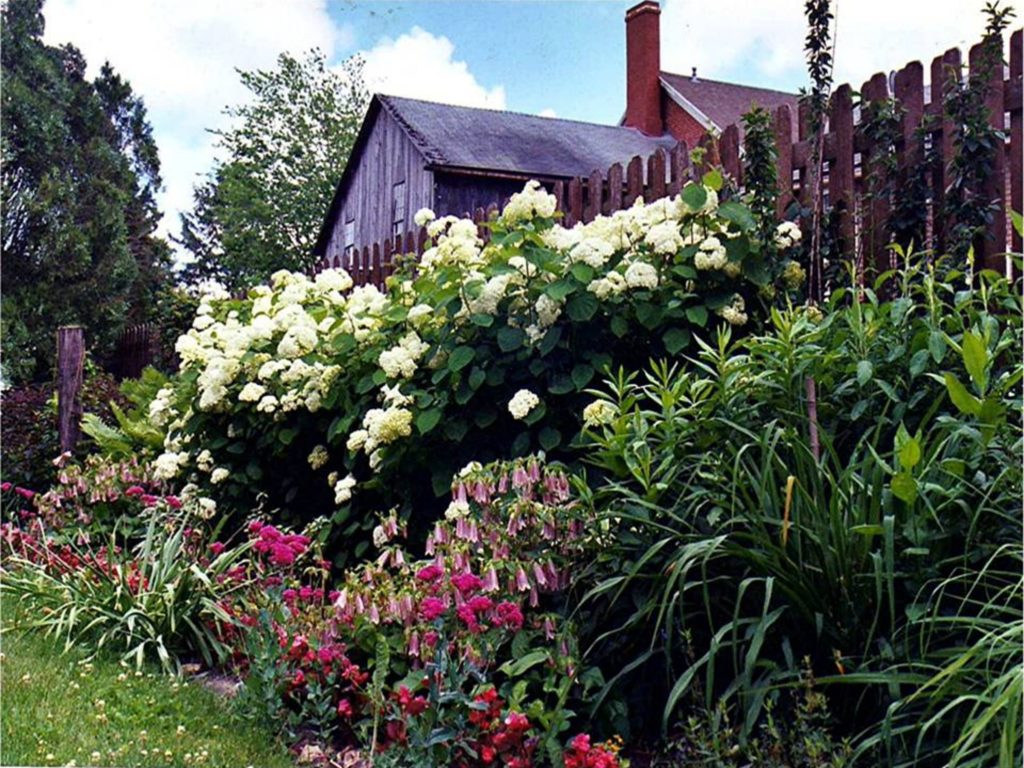 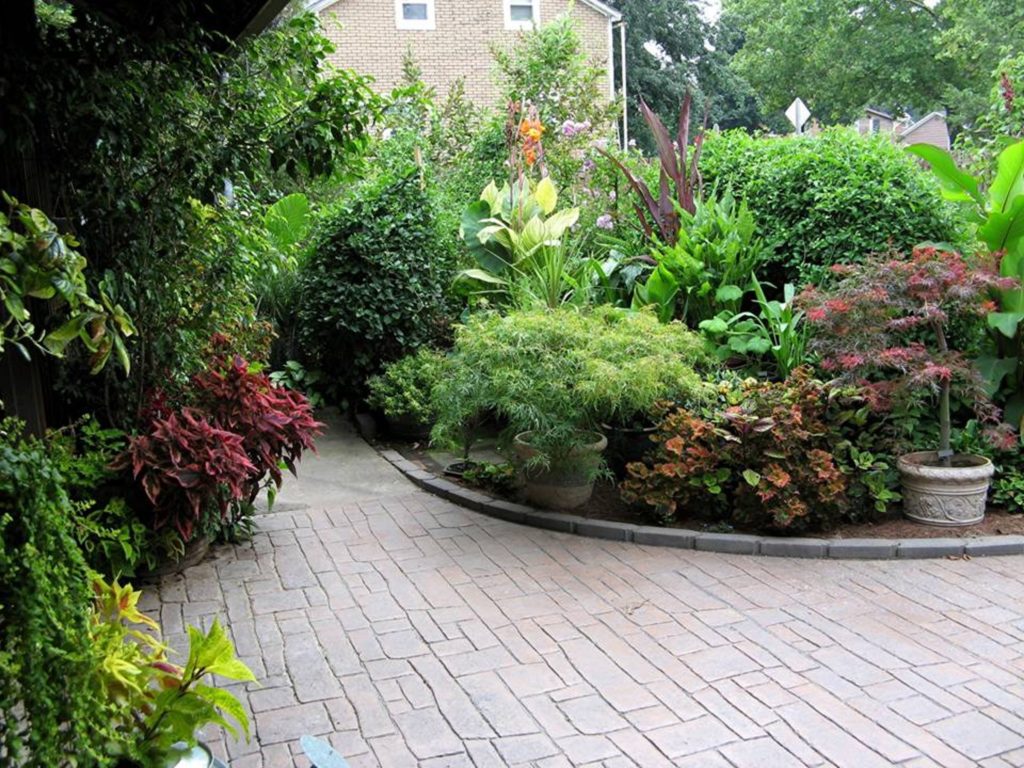 This collection of potted plants just west of the potting shed was arranged by Larry Rettig as a challenge to create interest using only leaves. Plants include coleus, cannas and Japanese maples. (photo/Larry Rettig)