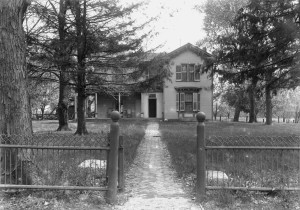 The Kirkwood House in Iowa City is among homes and gardens on the tour. (photo/Friends of Historic Preservation)

IOWA CITY – If you’ve never seen a Moffitt cottage, you have a wonderful opportunity coming up this Sunday, May 31.

Seven historic Moffitt homes, as well as other houses and gardens, will be featured on a walking tour sponsored by Friends of Historic Preservation, in partnership with the Lucas Farms Neighborhood Association.

Moffitt cottages might best be described as quirky, with architectural features you won’t see anywhere else.  The gardens are an added treat of their own and the event is the largest Parade of Historic Homes in Iowa City to date.

Read on for more about the tour from Friends of Historic Preservation:

Lucas Farms, located in the area bordered by Kirkwood Avenue to the south, Highway 6 on the north, and Sycamore Mall to the east, is one of Iowa City’s most architecturally diverse neighborhoods.

This year’s parade will feature the homes of Governor Samuel Kirkwood, known as Iowa’s War Governor because of his leadership during the Civil War; Plum Grove, the home of Iowa’s first territorial governor, Robert Lucas;  seven “cottages” designed and created by Howard Moffitt, and other architectural styles. In addition, the tour will highlight nine neighborhood gardens and various other points of interest, including the homes once lived in by Bill Sackter and Paul Engle.

The day’s activities will also include pony rides in the parking lot of Assembly of God Church for $2. All money raised from the pony rides will support the Lucas Farms Neighborhood Association.

Joanna Morgan and David Nyren will be in costume as Friendly and Robert Lucas. Mark Twain PTA will also be participating in costume and selling lemonade to raise money for their school.

A shuttle will be provided by the City of Iowa City to provide transportation around the neighborhood. This is the largest Parade of Historic Homes to date.

Bring in artifacts that you have dug up in your backyard or found in the attic and let the archeology experts assess them!

•   Historic costumed characters at various sites on the tour

This tour covers a large area so there will be free shuttle buses courtesy of Iowa City Transit to take visitors to and from the houses and activities. Parking and shuttle pick-up will be at the Iowa City Church of Christ on Kirkwood, Twain School, Faith United Church on Deforest, Plum Grove, and the Keokuk and Highland Corner.

Tickets may be purchased at the Salvage Barn (2401 Scott Blvd SE), online at www.ic-fhp.org, or at any of the homes on the day of the Parade. Tour proceeds will support the work of Friends of Historic Preservation.
Please visit www.ic-fhp.org for more information.