In the raw; more options opening for raw food lovers 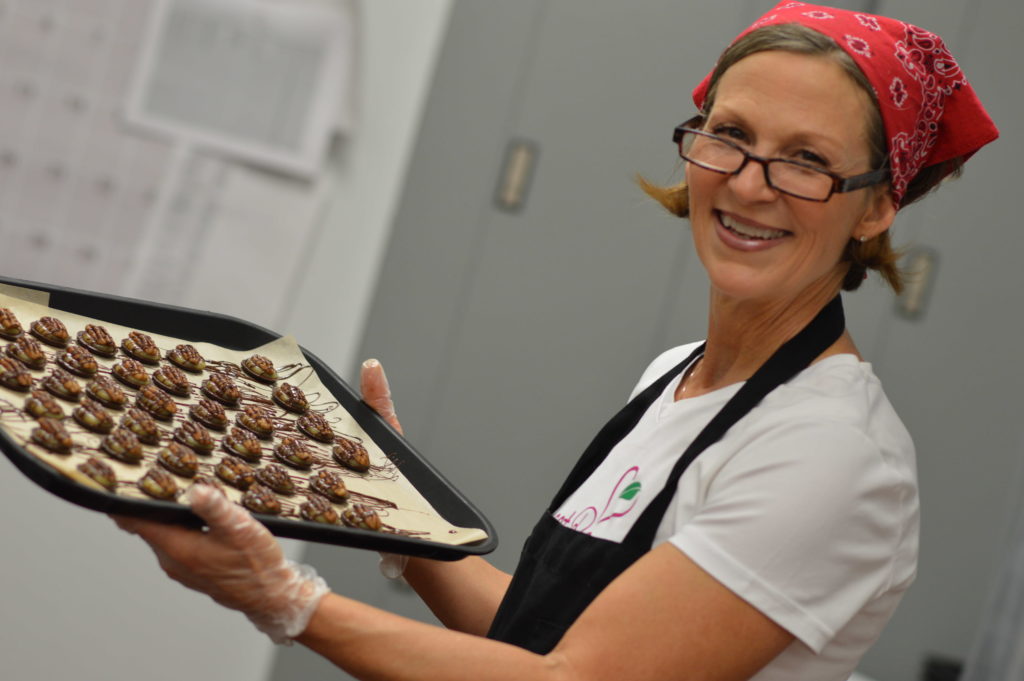 Laurie Moritz, owner of Sweet Raw Joy, is shown with a tray of Baby Sea Turtles in the kitchen of New Pioneer Food Co-op in Cedar Rapids. (photo/Cindy Hadish)

Raw food proponents, who oftentimes must prepare their own meals, can find a growing number of choices outside of the home.

New local catering and online options are being offered, as well as cafes that focus on whole, unrefined, uncooked foods. Raw foods are generally not heated above 115 degrees Fahrenheit to preserve natural enzymes and other nutritional benefits that could be harmed by cooking.

“The whole premise is, you are what you eat,” said Clay Grafft, 38, an entrepreneur and self-described health nut who opened Simple Superfood Cafe, 5345 Belle Ave., in Davenport this summer.

“Voodles,” or noodles made of zucchini, carrots, beets and other vegetables, are topped with sauces for another Super Bowl option.

Grafft’s interest in raw foods began 15 years ago when his mother was diagnosed with breast cancer and his father started researching healthy diets, sending along the articles he found.

His mother died three years ago, but Grafft and his father continue their interest in healthy lifestyles.

“He’s my inspiration,” Grafft said of his father. “These recipes are his and mine.” 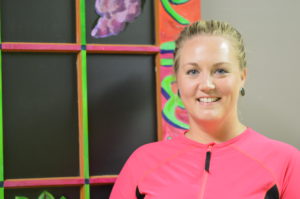 In Cedar Rapids, Jessica LaFayette is working on plans to open Rawlicious, a raw food, vegetarian and vegan cafe, in the coming year.

LaFayette, 36, said she and her husband, Tony, had heard from many people who travel to Iowa City to find vegan dining options, which encouraged them to bring raw foods to Cedar Rapids at NewBo City Market, 1100 Third St. SE.

She graduated from Living Light Culinary Arts Institute in California, and has been teaching raw food classes at Brightside Wellness spa, which she operates in the Cherry Building in Cedar Rapids.

This summer, Rawlicious has been selling smoothies, collard burritos and other food at the Downtown Farmers Market in Cedar Rapids.

She noted that one family that follows a strictly raw diet was particularly happy to know they will be able to dine out at a place that offers raw foods, adding that the preparation time for raw foods can sometimes be extensive.

Green smoothies, made with kale, spinach or Swiss chard and sweetened with peaches or pineapple, have been particularly popular. Processed sugars and artificial ingredients are avoided.

“My goal isn’t to convert people to be vegan,” she said, “but to make people aware of what they put in their bodies and to make conscious decisions about what they eat.”

Laurie Moritz discovered raw foods after training for a marathon, and after trying raw cheesecake that was shipped to Iowa from California, began a quest to make her own raw desserts. 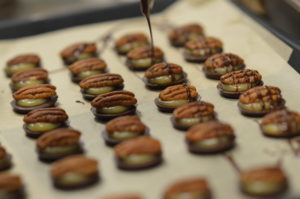 Moritz, 54, launched Sweet Raw Joy in July 2014, offering her desserts as a farmers market vendor at NewBo City Market. She now creates her lemon cheesecakes, triple chocolate truffle pies and other mouth-watering treats from the kitchen of the Cedar Rapids New Pioneer Food Co-op, which carries the items at all three of its locations.

The uncooked desserts are made with whole food ingredients, such as nuts, coconut nectar and medjool dates and are gluten-free, dairy-free and soy-free.

Moritz even makes her own chocolate, using it for creations such as “Baby Sea Turtles” with pecan centers.

“I had no idea,” she said of her initial foray into raw foods. “I thought it was salads and carrot sticks.”

The desserts have proven so popular that she started catering in addition to her sales at New Pioneer, and is also launching an online business, called Mystic Chocolate, this month.

Moritz notes that the desserts use natural, low-glycemic sweeteners and are full of whole, unprocessed, mostly organic ingredients, so the foods are nutrient-rich.

“Food is medicine, in a good way,” she said.