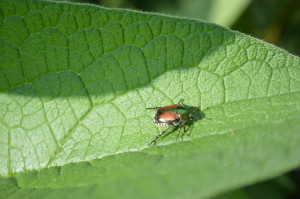 A Japanese beetle makes its way across the leaf of a comfrey plant on Monday, July 8, 2013, in Cedar Rapids, Iowa. (photo/Cindy Hadish)

As much as I held out hope that the Japanese beetle population had been wiped out by an unusually fortuitous twist of fate, my watch for the invasive insect ended today with the discovery of several beetles on my raspberry bushes.

If you have rose bushes, grapes, hollyhock, linden trees, pin oak, willows or raspberries, be on the lookout, as these plants are among the favorites of Japanese beetles. But really, they’re not that picky.

The beetles, easily identified by their copper-colored wings and metallic-green heads, are known to devour at least 300 different plants, turning the foliage into lace.

Iowa State University Extension notes that Japanese beetles also are becoming a common corn and soybean pest. ISU produced a map last year that showed the beetle had made its way into nearly 60 of Iowa’s 99 counties, after first being recorded in the state in 1994.

In the past, I was a bit squeamish about smashing the bugs with my bare hands, but no longer, especially after witnessing the destruction these foreign invaders wreak.

I’ll still use my favorite method on larger numbers: knocking them into a bucket of soapy water. This tends to work better in the late afternoon, when the beetles have less of a tendency to fly away and escape.

I avoid insecticides and haven’t tried the pheromone traps that some gardeners use to lure large numbers of Japanese beetles to their deaths.

A friend passed along this method, which I intend to try this year. Last year, she had some success sprinkling self-rising flour on her plants.  She noted that the foliage showed some effect from the treatment, “but not as much as having everything chewed off.”