Quite a few events coming up in Eastern Iowa that I’ll be posting in the next several days.  Solar energy takes center stage throughout Iowa and a “recycle” style show hits the runway in Cedar Rapids, both this month. 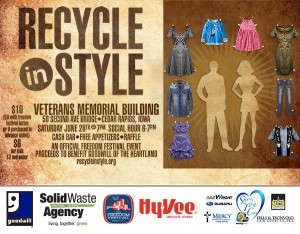 Recycle in Style is set for Saturday, June 28. Enjoy fashions made from completely recycled materials and look for a runway appearance from Green Iowa AmeriCorps as part of the  Cedar Rapids Freedom Festival. Social hour is 6-7 p.m., with the event beginning at 7 p.m. at the Veterans Memorial Coliseum, on the Second Avenue Bridge. Cost is $10, or $8 with a Freedom Festival button or if purchased online in advance at www.recycleinstyle.org

State Sen. Rob Hogg passed along the following about “Solar Works For Iowa,” a series of events around the state on June 20 and 21 that showcase how solar power is working for Iowa, and to promote expanded state tax credits that were passed with near-unanimous bipartisan support and signed by the Governor May 30.

Solar power is working for Iowa today, generating electricity and reducing energy bills for owners.  Now with the passage of Senate File 2340, Iowans have even more reasons to install solar power at our businesses and our homes.  Solar projects that are properly sited and installed can generate significant amounts of electricity and reduce future energy bills for Iowa homeowners and businesses.

Under Senate File 2340, Iowans can now receive state tax credits worth up to $5,000 for a homeowner and up to $20,000 for a business owner.  When combined with a 30% federal tax credit, Iowans can receive almost half of the cost of solar projects back in tax credits.  The statewide cap for available tax credits was increased from $1.5 million to $4.5 million.

Friday, June 20, 12:30 p.m. – University of Iowa, Iowa City – The University of Iowa opened its solar electric vehicle charging station in 2011 outside the MadisonStreetServicesBuilding, 640 South Madison Street.  It generates at estimated 70,000 kilowatt-hours of electricity each year.  Speakers include Senator Rob Hogg of Cedar Rapids and Liz Christiansen, Director of the Office of Sustainability.

Saturday, June 21, 10:00 a.m. – Cedar Falls – This event will showcase a private residential solar system, installed in 2012, at 1902 West 12th Street.  The system generated 2,329 kilowatt-hours of electricity in its first year of operation.  In addition to providing electricity for the home it also charges the batteries of a Chevy Volt.  Learn more about using solar power for transportation during your visit.  For more information, contact Kamyar Enshayan at 319-273-7575 or Pat Higby at 319-273-6012

Saturday, June 21, 11:00 a.m. – Cedar Rapids – The IBEW Local 405, located at 1211 Wiley Blvd SW, installed an 11.1 kilowatt facility that has generated 6,280 kWh since the start of 2014.  Speakers include Senator Rob Hogg of Cedar Rapids, Rich Good of the IBEW Local 405, Tyler Olson of Paulson Electric, Stan Pfoff of Nelson Electric, Emy Sautter of Prairiewoods, and Renate Bernstein, a homeowner with solar electric and solar hot water systems at her home.

Saturday, June 21, 11:00 a.m. – Independence – There will be a solar open house from 11 a.m. to 1 p.m. at the home of Joe Olsen, 2003 206th Street, just northeast of Independence, which has a 5.4 kilowatt solar system.  Earlier in the day advocates and vendors will be at the Independence Farmers’ Market, starting at 8 a.m., with a solar information booth.

Saturday, June 21 – 2:00 p.m. – Marshalltown – The Marshalltown Public Library, located at 105 W. Boone Street, installed a 15.7 kilowatt system in 2009 that has generated nearly 100,000 kilowatt-hours in just over 5 years of operation.  Speakers will include Senator Rob Hogg of Cedar Rapids.  The meeting will take place in the large community room.