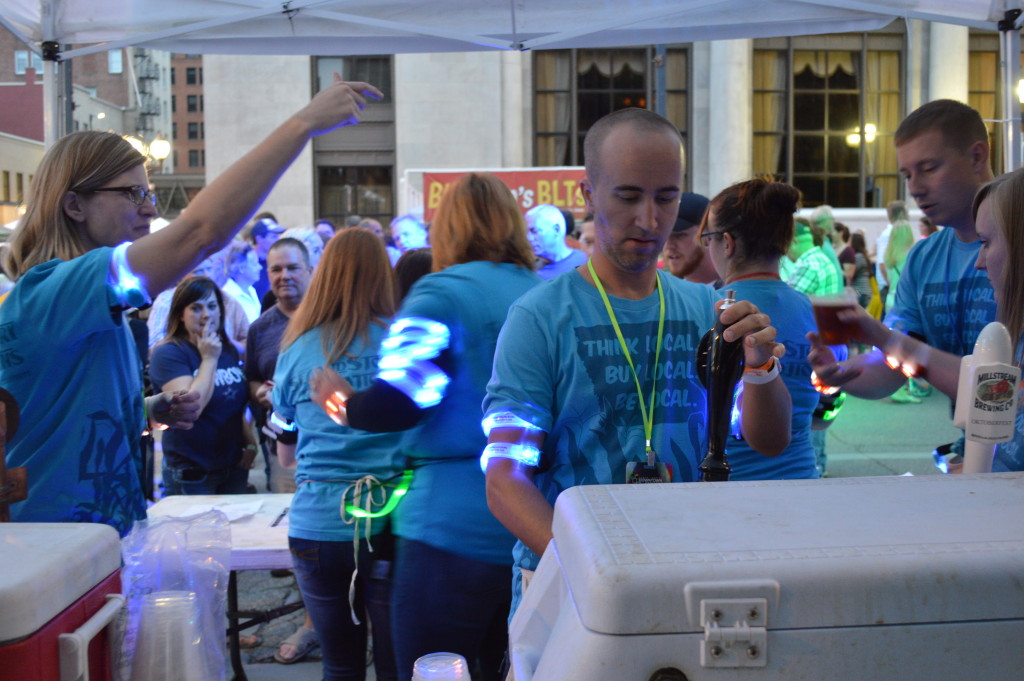 Beverage stands kept busy Saturday, Aug. 29, 2015, during Market After Dark, a celebration of the 10th anniversary of the Downtown Farmers Market in Cedar Rapids. The market is making a return in 2016. (photo/Cindy Hadish)

An experiment with an unconventional farmers market is moving to the next phase after a wildly successful trial run.

Market After Dark, which debuted last August in downtown Cedar Rapids, will be repeated this summer with some tweaks, said Melissa McCarville, communications manager for the Cedar Rapids Metro Economic Alliance.

The Downtown Farmers Market, which the group hosts, is held twice-monthly May through September, from 7:30 a.m. to noon. Each attracts about 14,000 customers.

Market After Dark, which ran from 7:30 p.m. to midnight last Aug. 29, celebrated the 10th anniversary of the downtown markets. The nighttime event, with festival lighting, live music and adult beverages, along with typical market vendors, attracted 34,000 people.

Organizers who planned to see the usual size of crowds were surprised to have an extra 20,000 attendees, Ms. McCarville said.

“That really made a statement,” she said. “Clearly, there’s that need and that want for the event to exist in Cedar Rapids.”

Customers walked shoulder-to-shoulder and waited in long lines, while some vendors ran out of food.

Ms. McCarville said overall though, positive comments came from vendors, who had high sales, and attendees, who were excited to have that type of event on a summer’s night.

“People commented that they felt like they were in a larger metropolitan area,” she said.

Jill Wilkins, events planner for the Metro Economic Alliance, said work is under way to expand the venue and space the vendors apart to address long lines and congestion.

“We want to take what we learned last year and apply it to this year,” Ms. Wilkins said of the Aug. 27 event.

Plans call for adults to again be allowed to buy beer at beverage stations and carry it throughout the venue.

Ms. Wilkins said organizers plan an atmosphere that appeals to a wide age-range, but programming won’t target children specifically — such as balloon animals — and the decision to bring younger family members will be left to parents.

A large number of vendors applied for Market After Dark, with 90 accepted, she added.

As they did last year, organizers will encourage customers to patronize downtown businesses, which also saw an influx of crowds during Market After Dark.

Ms. McCarville noted that it’s too soon to say if the nighttime markets will be held more often. 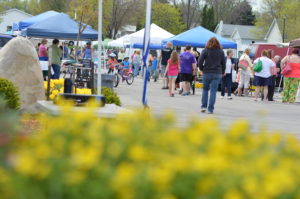 Hiawatha kicked off Iowa’s 2016 farmers market season in April. More markets are opening for the season this month. (photo/Cindy Hadish)

Elsewhere, the ebb and flow of farmers markets continues in Eastern Iowa.

The season launched April 24 in Hiawatha with more than a dozen vendors, including first-timers Brad and Jodie Wittenburg, who sold tomato seedlings, eggs and other items to diversify income from their Springville farm.

“We like to get out and meet people,” Ms. Wittenburg said of the attraction of selling at markets.

Even as their popularity grows in Iowa and beyond, some farmers markets are ending.

A longtime Tipton market, on Saturday mornings, did not have enough support from customers, said Evelyn Walshire, one of the organizers.

“Everyone likes to stay in bed on Saturdays,” she said.

The market hosted by Riverside Casino & Golf Resort drew 25 to 30 vendors and was well-attended, especially by customers headed to the casino’s Sunday brunch, but market manager Ruby Dickey, who also works in the casino’s marketing, didn’t have the “manpower” to continue the market, as work continues on a new venue for the Rhythm City Casino Resort in Davenport.

Ms. Dickey said she ultimately would like to offer farmers markets at both sites, but as of now, the Riverside market “has just kind of run its course.”

Markets elsewhere are starting or expanding.

Lion Bridge Brewing Co. is starting a new farmers market on select Thursday nights in Czech Village in Cedar Rapids, and West Liberty Economic Area Development, known as We Lead, is resurrecting the West Liberty market after a three-year hiatus.

In University Heights, Council Member Silvia Quezada is excited about the new market location and initiatives under way for the community, next door to Iowa City.

The markets, held the first Tuesday of the month from June through October, will relocate this year to the University Athletic Club, 1360 Melrose Ave.

Ms. Quezada said sponsors are being sought to provide live music at each market, beginning with bluesman Kevin “B.F.” Burt in June.

Free tables will be offered to nonprofits and Ms. Quezada started a Facebook page to let people know what’s in season and attract more people, both young to older.

“I want people to get a closeup look to know where their food is coming from,” she said, adding that the markets go beyond food. “I think it’s a community forum. It’s a touch-point for neighbors to take time out of their busy lives and say ‘hello.'”

Learn how to subscribe to the Corridor Business Journal at CBJ and find dates and times for more than 50 farmers markets in Eastern Iowa on the Homegrown list.