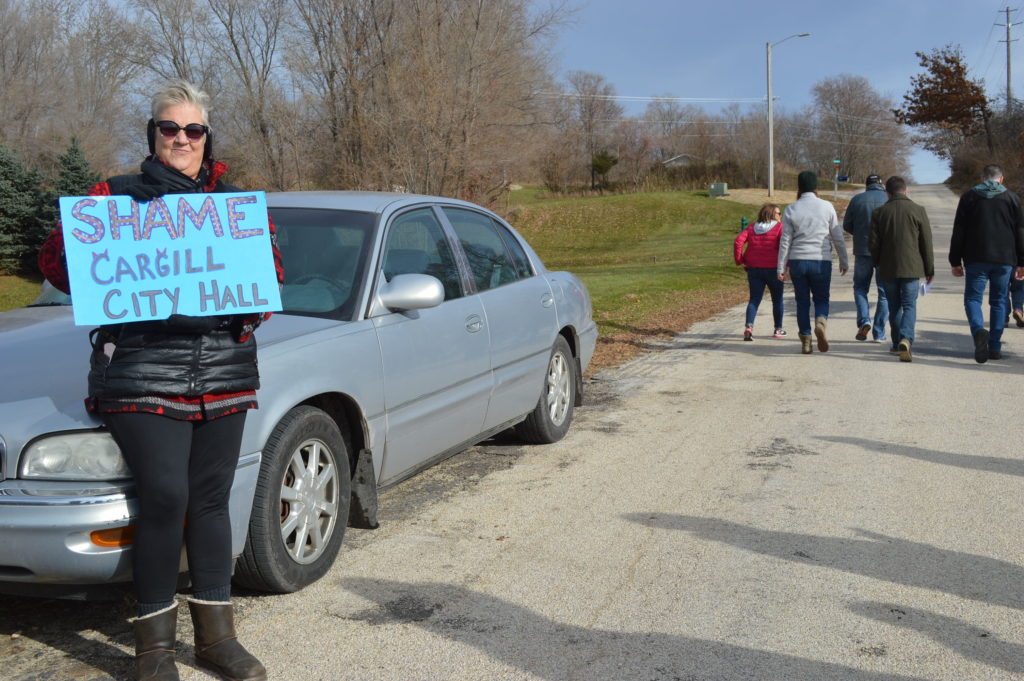 The Cedar Rapids City Council voted Tuesday, Dec. 3, 2019, on a second reading to rezone land for an industrial railyard for Cargill. Walks were held last week to introduce residents to the nature corridor and residential neighborhood where the project is planned in southeast Cedar Rapids. (photo/Cindy Hadish)

CEDAR RAPIDS — Residents of a southeast Cedar Rapids neighborhood once again pleaded their case to halt Cargill’s proposal to build an industrial railyard next door to their homes and a nature corridor.

More: Neighbors say truth on their side

About 25 people spoke during the City Council meeting on Tuesday, Dec. 3, 2019, with a nearly equal split of Cargill employees and those opposed to the plan to rezone land to build the 12-track, 200-car railyard, south of Otis Avenue, west of Cole Street SE, from suburban residential large lot to general industrial.

The site is currently used as a Prairie Pollinator Zone and is in the floodplain, a concern cited by several residents worried about future flooding, particularly after the Rompot neighborhood was devastated by the 2008 flood. 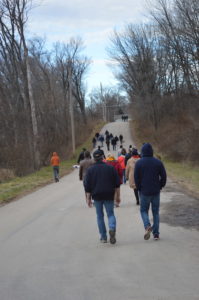 Residents tour the nature corridor on Nov. 24, 2019, where Cargill plans to build a railyard. (photo/Cindy Hadish)

While the rezoning request was unanimously approved at the City Council meeting Nov. 19, one council member voted against the rezoning on its second reading.

Council member Susie Weinacht was traveling last month and did not vote on the rezoning or on amending the city’s future land use map from urban low intensity to urban high intensity, both of which were unanimously approved.

Weinacht, the sole dissenting vote Tuesday, said she looked at the rezoning in the context of various elements, including the city’s comprehensive plan, the nearby Indian Creek Nature Center, Sac & Fox Trail, the floodplain and Prairie Park Fishery, a popular site next to which the railyard would be built.

“I will respectfully cast my vote not against the need of a valued industrial partner, but a vote to stay the course,” she said. “As I see it, we remain open for business.”

She urged city staff, Cargill and the community to “think outside the box” to find alternative solutions.

Union Pacific currently serves Cargill from existing railyards in northeast Cedar Rapids. Cargill representatives have said the company needs its own railyard to remain competitive and would rethink operations at its corn milling plant on Otis Road SE if it doesn’t have its own railyard.

Residents who will have to live with the noise and emissions of a railyard operating 12 hours daily, even on weekends and holidays, said they should not have to shoulder the economic burdens of a privately owned international ag giant.

“Why are their jobs more important than my home?” asked Mary McBride, who is retired and said she has invested more than $250,000 in her Otis Road home. “You’re not just destroying a neighborhood. You’re destroying lives.”

Former Mayor Ron Corbett, speaking in his role with the Cedar Rapids Metro Economic Alliance, decried the “us vs. them” narrative of the issue.

He cited Cargill offering concessions on safety by agreeing to install a fence around the railyard, and by “limiting” hours of operation to 7 a.m. to 7 p.m.

Neighbors countered by noting they relied on the city’s comprehensive plan and zoning when they purchased their homes. 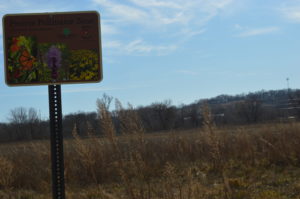 “I didn’t buy my house to use my yard part-time,” said Dustin Carson, whose home is nearby on Thompson Street SE. “It’s going to disrupt everything.”

One Cargill employee said the company “always does the right thing,” including support shown during his cancer diagnosis.

But even Cedar Rapids residents who don’t live near the site said the railyard would be disruptive.

Anya Illes, a Mount Mercy University visiting professor, whose husband teaches at Coe College, cited the value of the pollinator land near the Cedar River as part of a contiguous nature corridor.

“This piece of wild open space is much more valuable than other pieces in other places,” she said.

Cargill has promised to plant pollinators on another piece of land to replace the Prairie Pollinator Zone on the 28-acre site where it plans its railyard, currently owned by the city.

Rob Hogg, a state senator and attorney who lives on Otis Road SE, said rezoning the site would violate the city’s flood protection plan, pointing to a map that promised green space in the spot.

“That alone should end this rezoning,” he said.

He noted the city is spending more than $570 million in flood protection, and bought out 27 properties after the 2008 flood in the Rompot neighborhood that can no longer be purchased or developed, yet is willing to sell the site in the floodplain to Cargill.

“That’s a double standard and under Iowa law is arbitrary, capricious and unreasonable,” he said. “If you approve this, you will drive some residents and visitors away from the city of Cedar Rapids.”

The third and final reading of the rezoning request is expected at the Tuesday, Dec. 17, City Council meeting at 4 p.m. at City Hall, 101 First St. SE.