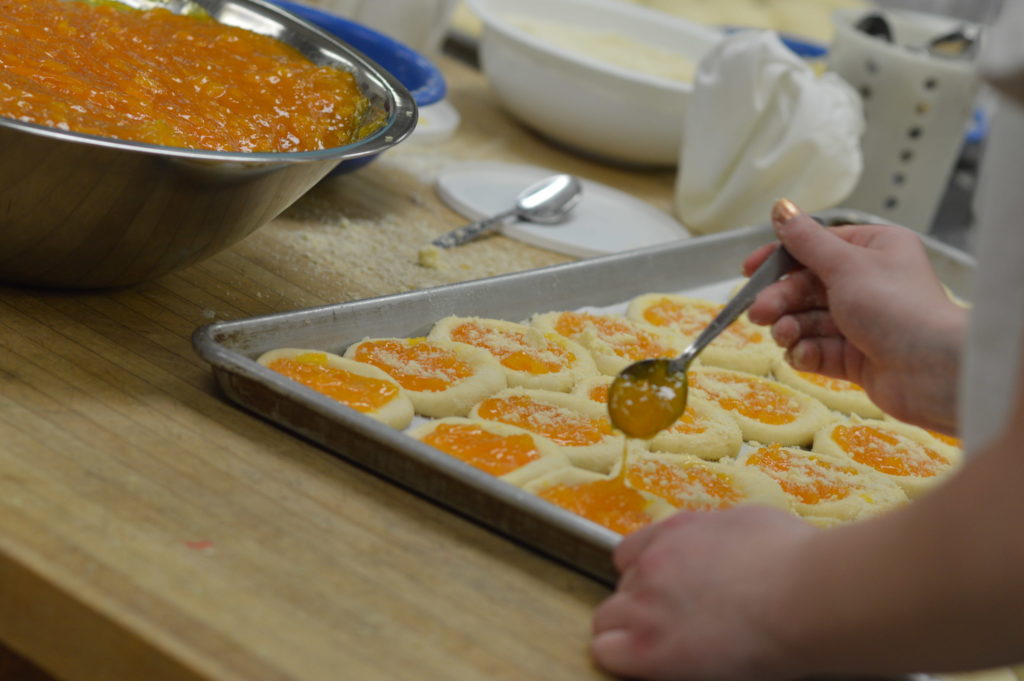 CEDAR RAPIDS – Even as kolache sales kick off early this Friday for the St. Ludmila Kolach Festival, Karen Billick can be assured there will be customers waiting even earlier.

Drive-up kolache sales run 6-9 a.m. that day, but, “they’ll be here in line at 5 a.m.,” said Billick, who oversees the entire kolache-baking process during the annual festival, which began in 1938.

Such is the draw of the beloved fruit-filled Czech pastries that are at the center of the Kolach Festival, running Friday, June 7, through Sunday, June 9, 2019, at St. Ludmila Catholic Church, 211 21st Ave. SW, in Cedar Rapids, Iowa.

Baking the kolaches — or koláče in Czech — began Thursday in preparation for the drive-through sales, said Billick, who is in her 11th year, after training under longtime coordinator, Irma Kelly, who died in 2009.

Billick takes off three days from her full-time job for the festival. She volunteers through the night Thursday, finally making it home at 3 p.m. Friday to shower and sleep for a few hours before returning at 10 p.m. to start the process again.

Baking ends on Sunday morning, with Billick carefully monitoring the quantity of kolaches baked throughout the three-day festival. Some years, the kolaches sell out, while on one occasion, there were leftovers, though that is considered a rarity.

Billick said the overwhelming favorite is cherry — more than 50 percent of those baked for the festival are in that traditional flavor — followed by less traditional strawberry and apple, as well as apricot (Billick’s favorite.) Beloved by Czechs, the poppyseed kolache is next in line and last is another traditional flavor, prune. 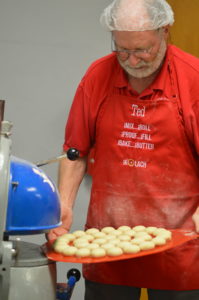 Balls of kolache dough are taken out of the “rounder” machine. (photo/Cindy Hadish)

Rhubarb kolaches also are making a seasonal appearance at this year’s festival.

With 70 volunteers needed for each of the 11 four-hour shifts, the only thing that limits the numbers baked is “manpower,” Billick said.

Some parishioners volunteer for more than one shift and some volunteers even come from outside the parish to join in to help, including kolache bakers from St. Wenceslaus Catholic Church.

The work can be hot, especially in the “dough room” where space heaters are used to keep temperatures high enough for the dough to rise. AB Mauri donates 170 50-pound bags of the dry kolache mix, enough to last through the festival and other bakes done throughout the year for special occasions and sales.

Volunteers add yeast, sugar and water to the mix and the dough is measured out on a scale, with 3 pounds used to make 35 “balls” of the dough.

One game-changer for the process came when Randall Foods closed almost 20 years ago in Cedar Rapids, and St. Ludmila acquired the grocery store’s “rounder” machine, which replaced the hand-rolling process to make each ball of dough. 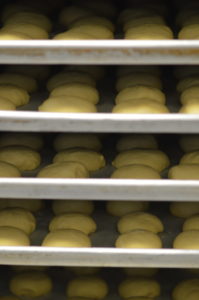 Once the balls of dough are placed on trays, they are taken to proofers for another hour to rise.

Many hands then go to work in the kitchen, where glasses are used to indent the round spot where the filling will go and volunteers spoon various fillings into the dough; sometimes sprinkling on toppings.

The kolaches are baked at 350 to 400 degrees F, depending on the oven used, and are monitored carefully.

“We don’t time them,” Billick said. “We just ‘eyeball’ them. I like them to come out golden brown.”

Those that don’t achieve perfection might be given the OK for volunteers to eat.

Otherwise, they are buttered, allowed to cool and packaged in dozens and half-dozens, with some packaged for individual sales.

Billick might be one of few people who will go through the festival without eating a kolache, though her husband would be disappointed if she doesn’t bring some home. 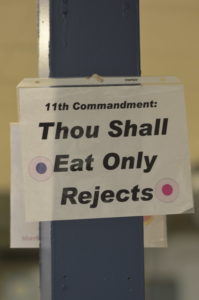 Carnival rides, a raffle, food, bingo, live music and more also are a part of the annual festival.

While online signup for volunteers has made recruiting easier, there is one spot that Billick has yet to fill. She is looking for an apprentice to learn the process, so she can “retire” as coordinator.

“Irma was getting older and I didn’t want it to die,” she said of her reason for volunteering to take over the key position, adding that she is ready for someone else to take the reins now. “I didn’t want to see it end. Little did I know…”

See more photos, below, and learn about other Czech activities in Iowa. 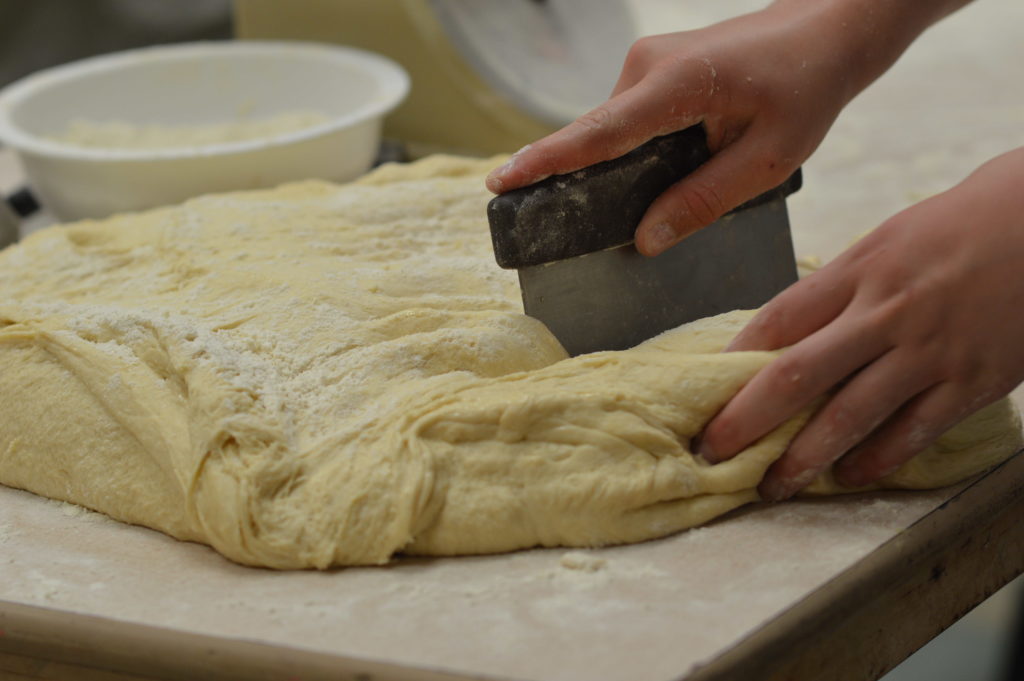 Kolache dough is cut in one of the first phases of the process. (photo/Cindy Hadish) 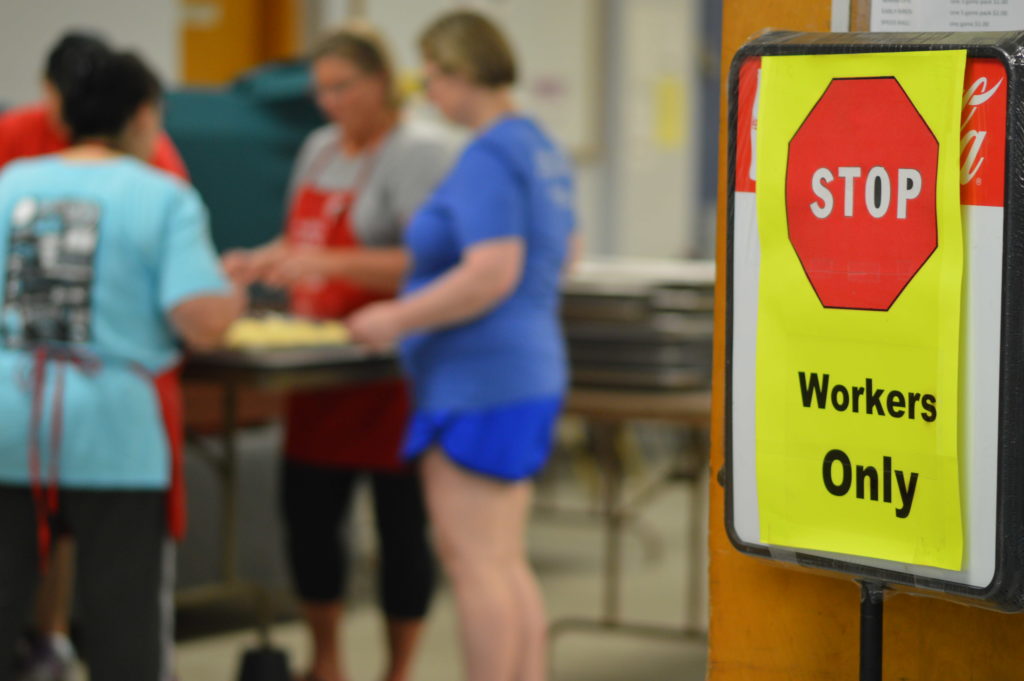 Each shift uses 70 volunteers during the Kolach Festival. (photo/Cindy Hadish) 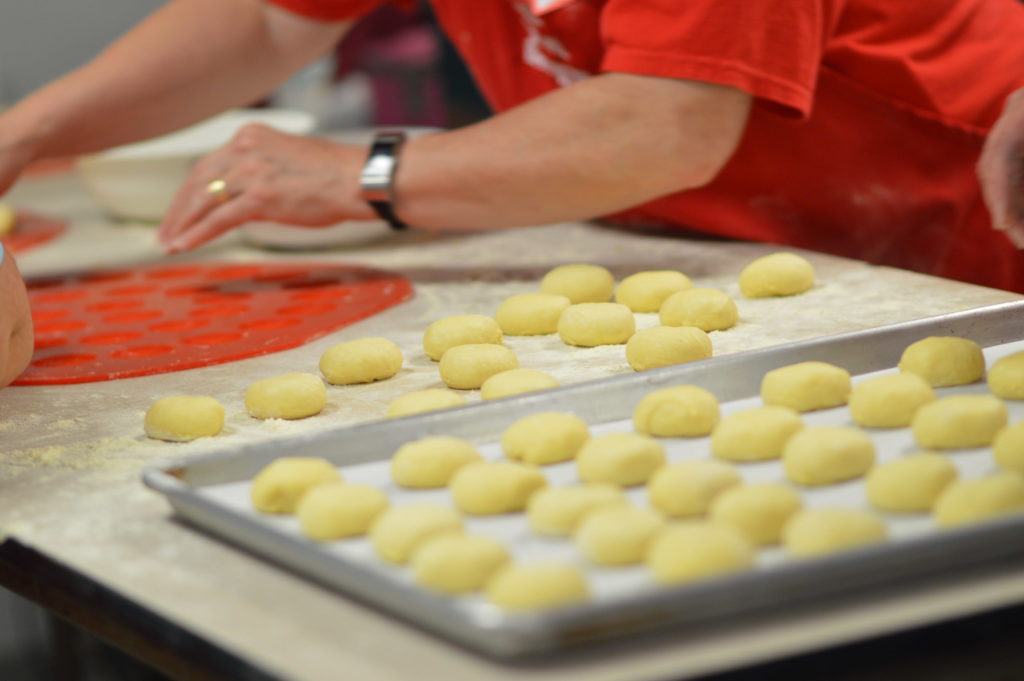 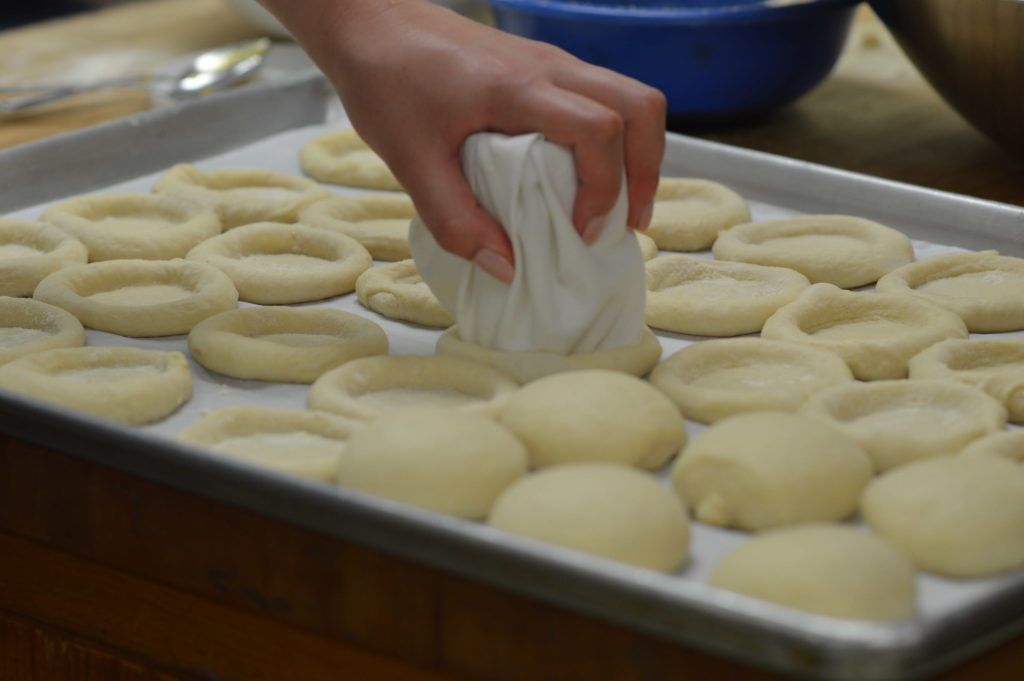 Glasses are used to indent perfect circles in the dough. (photo/Cindy Hadish) 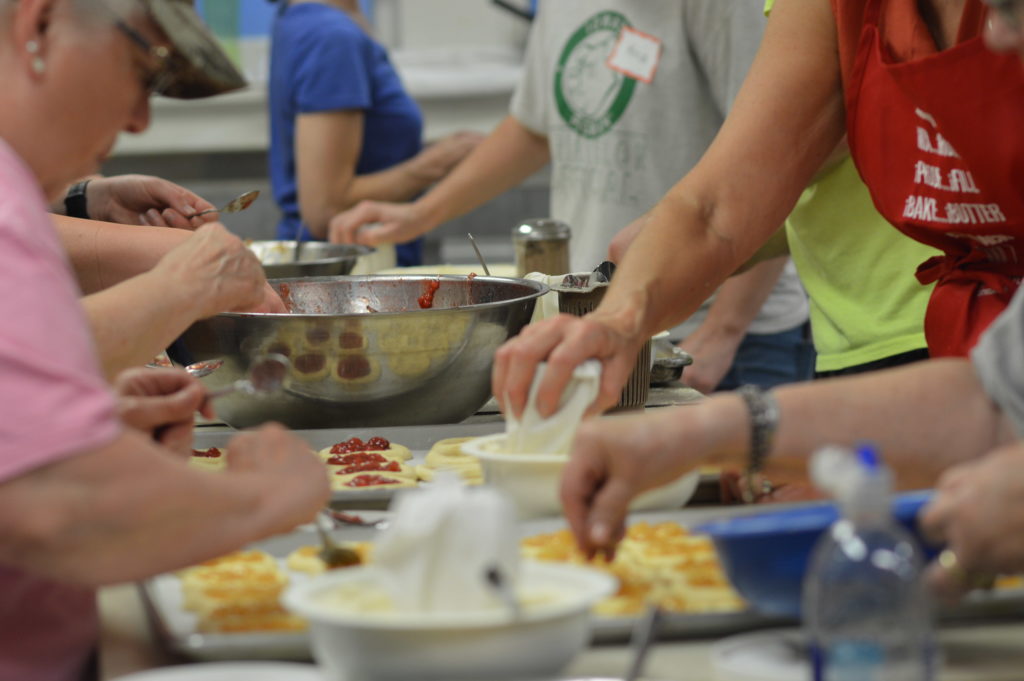 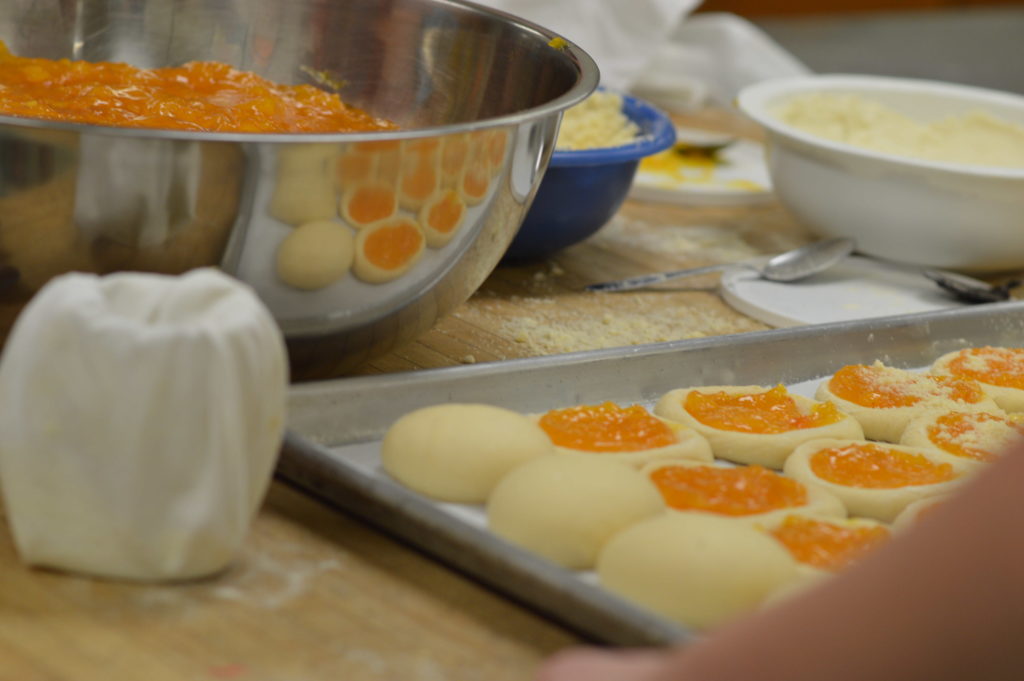 Apricot kolaches are reflected on a bowl of filling. (photo/Cindy Hadish) 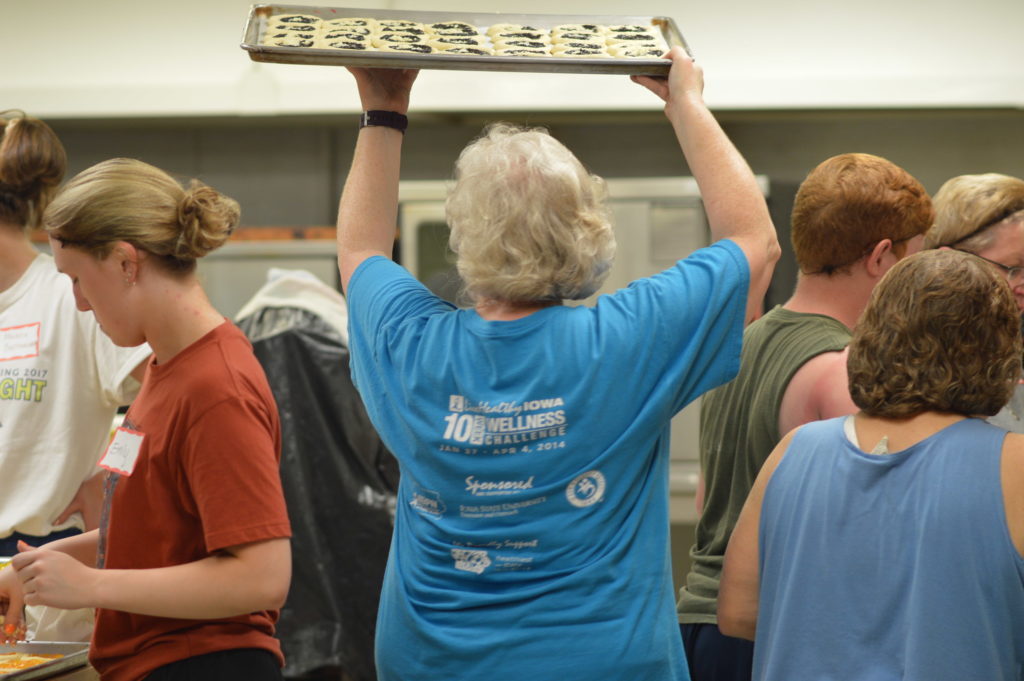 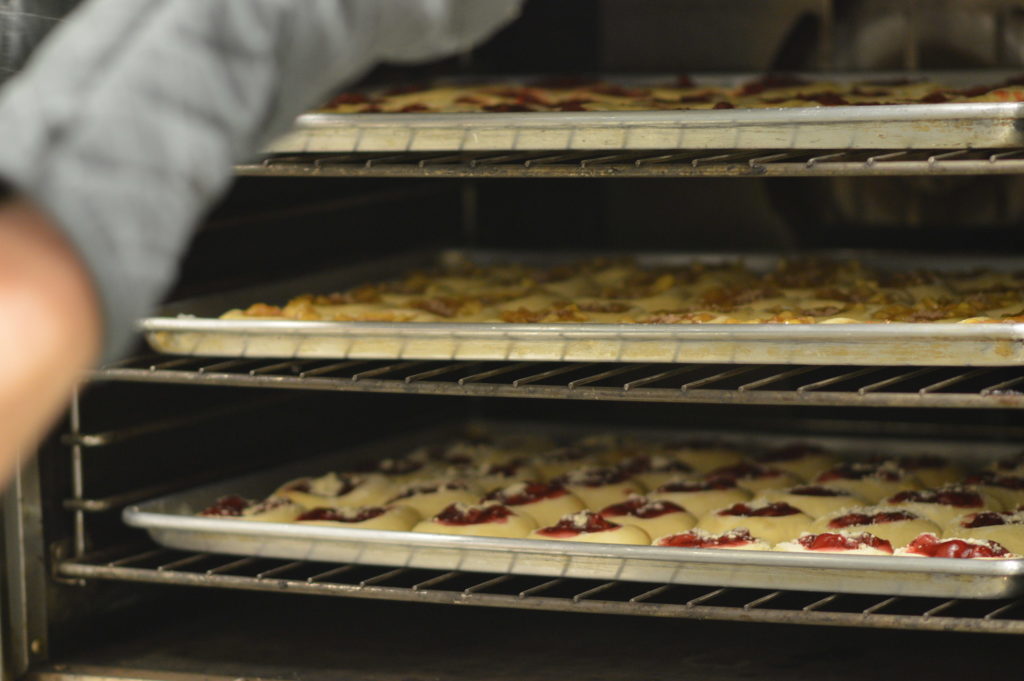 Trays of kolaches bake in one of several ovens. (photo/Cindy Hadish) 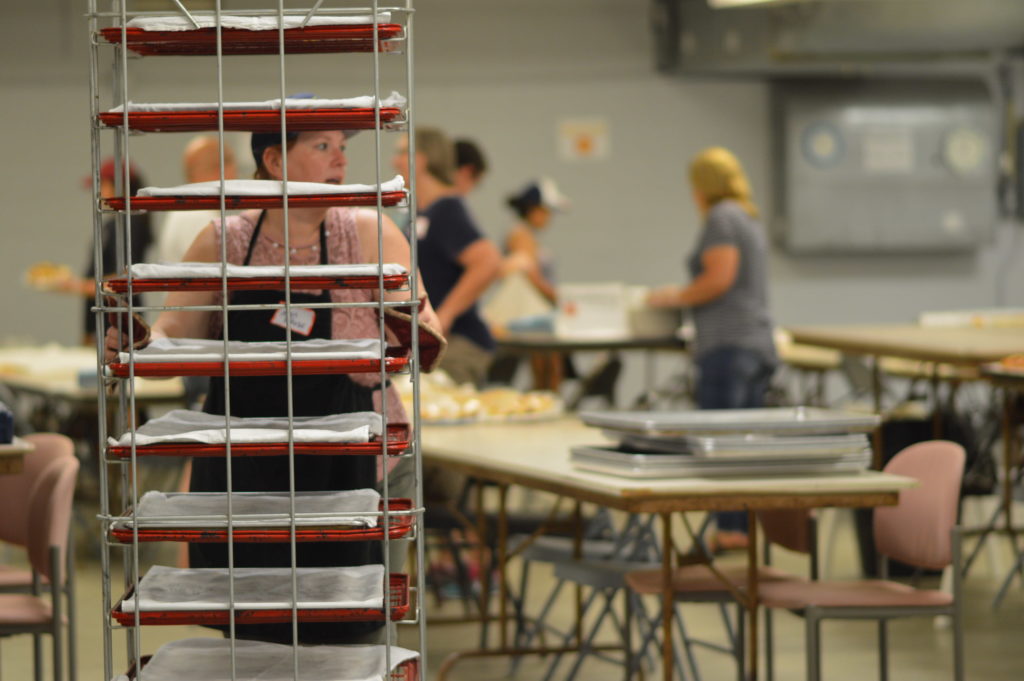 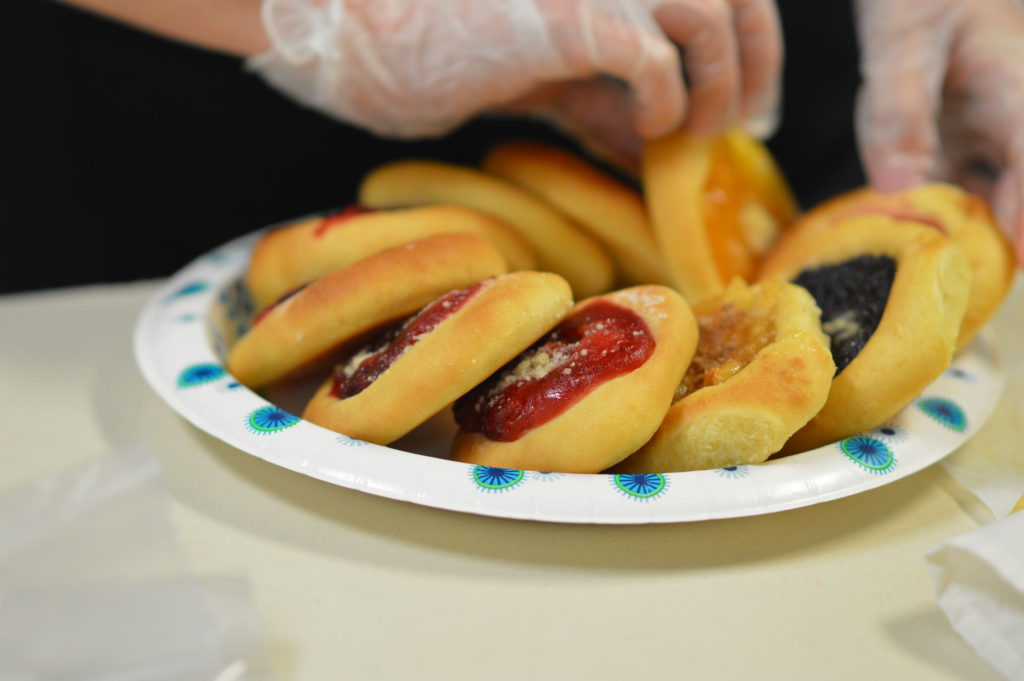 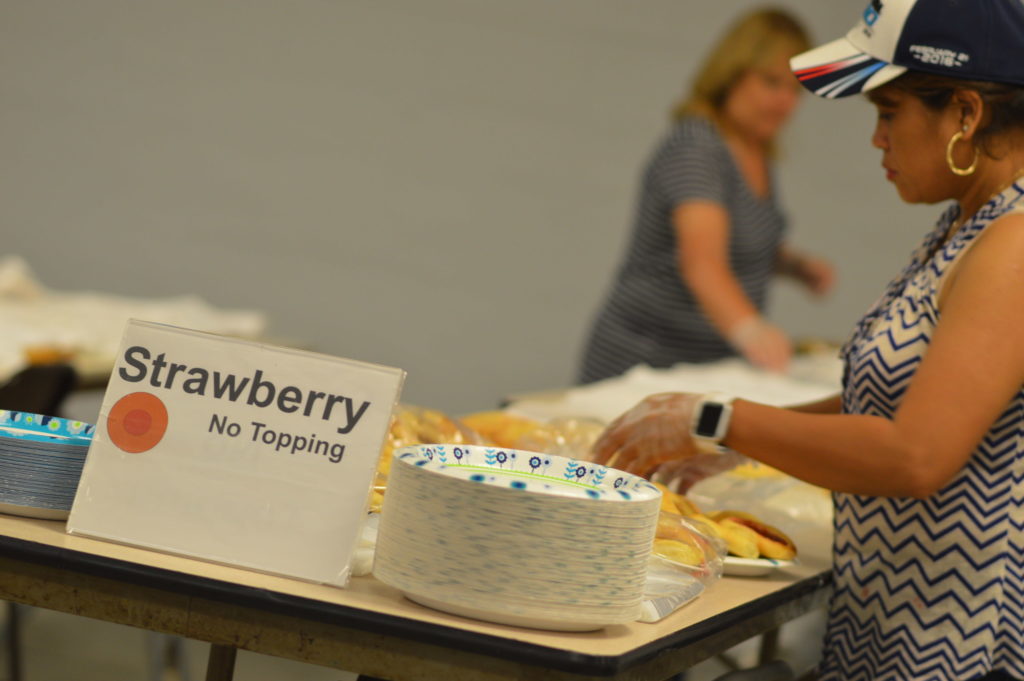 Strawberry is among the popular flavors of kolaches. (photo/Cindy Hadish) 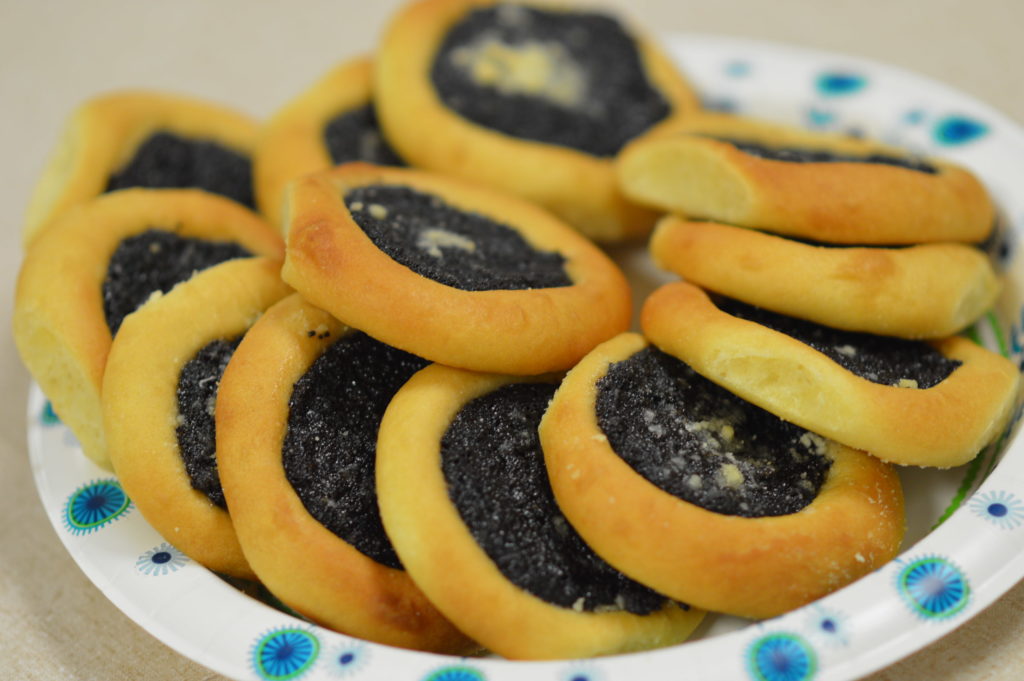 Traditional poppyseed kolaches are ready to be wrapped. (photo/Cindy Hadish) 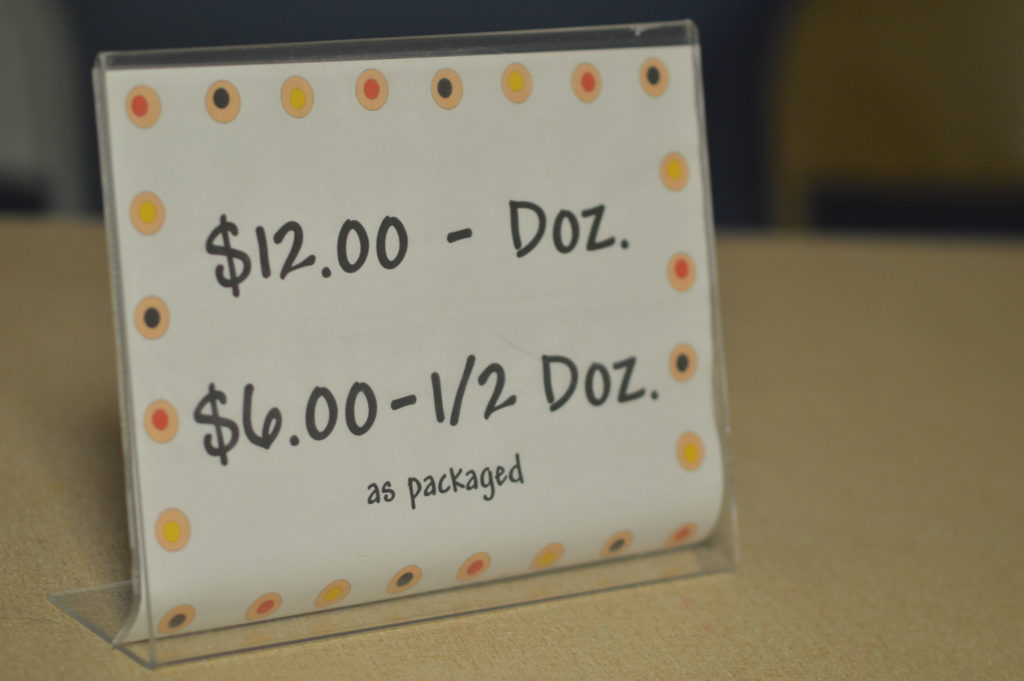 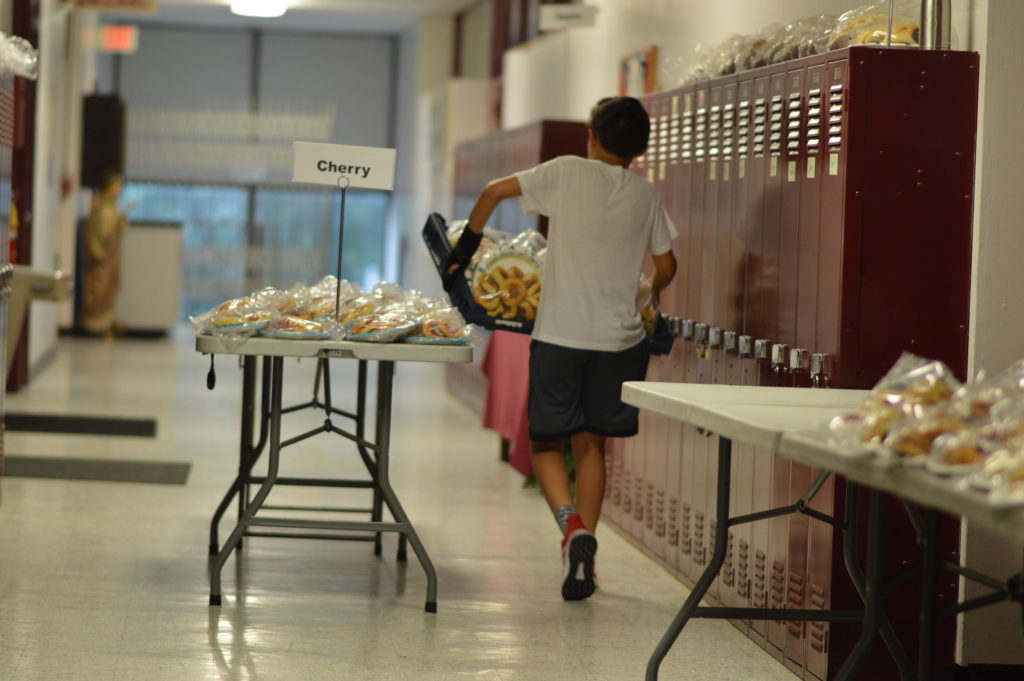 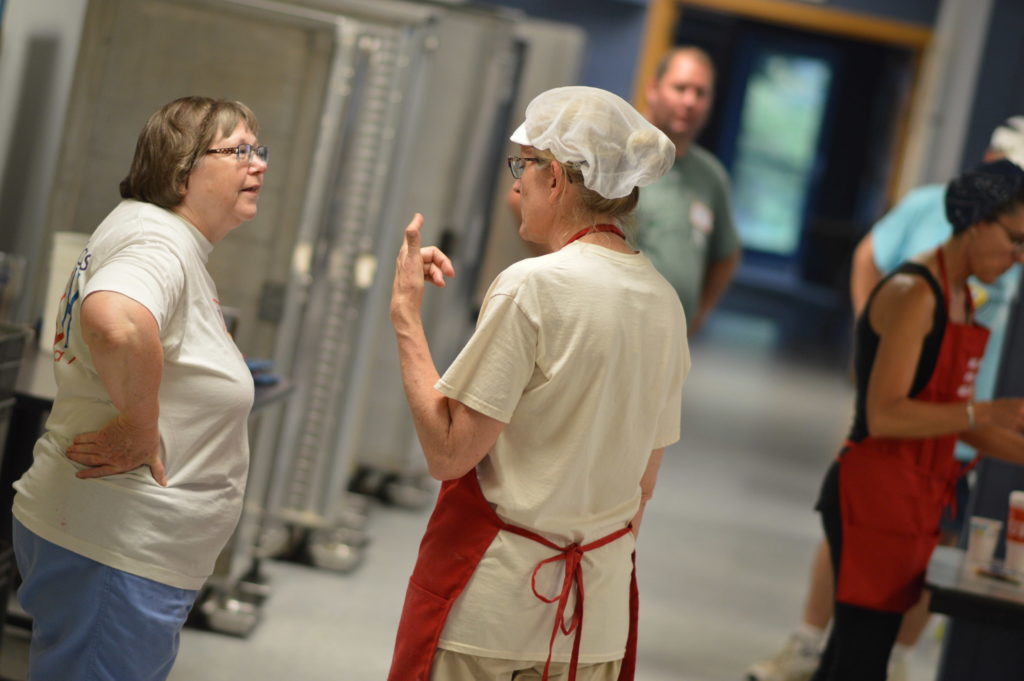 Volunteers work long hours into the night, but find time to socialize, one of the draws of the work.(photo/Cindy Hadish) 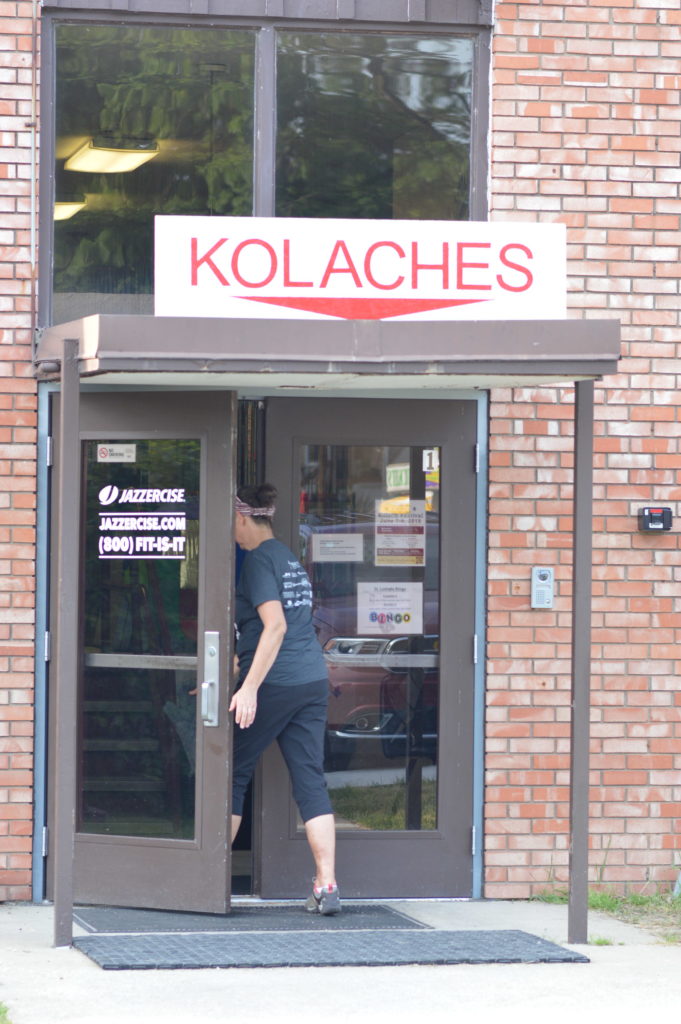 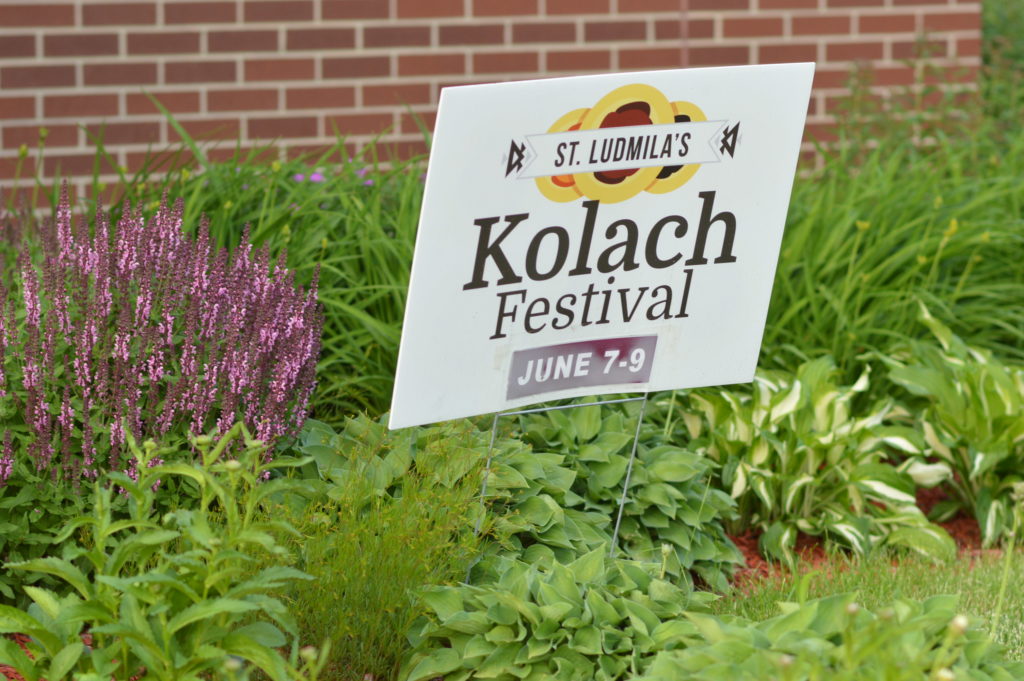