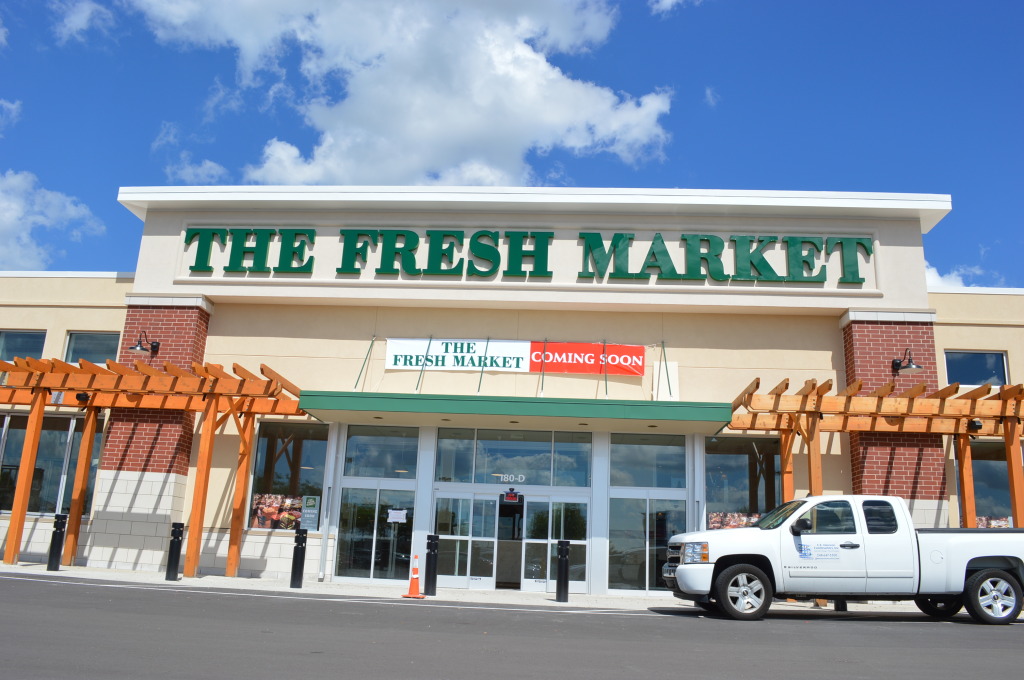 The Fresh Market will open Oct. 1, 2014, at the former Kmart location, 180 Collins Rd. NE, in Cedar Rapids, Iowa. The opening will mark the first foray into Iowa for the chain, which offers local, organic and all-natural products, prepared foods, custom cuts of meat and bulk spices. (photo/Cindy Hadish)

CEDAR RAPIDS — Three east-side grocery stores could open their doors within months of each other, but store leaders insist it’s not a race to see who can finish first.

The Fresh Market, New Pioneer Food Co-op and Fareway all will open new stores just a few minutes’ drive from one another in Cedar Rapids.

The opening will mark the first foray into Iowa for the chain, which offers local, organic and all-natural products, prepared foods, custom cuts of meat and bulk spices. 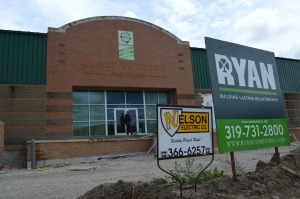 The loading dock for New Pioneer Food Co-op’s new store in Cedar Rapids will be at the front, facing Center Point Road NE, with the main entrance off the parking lot at the rear of the store. (photo/Cindy Hadish)

With a similar focus on local and organic products, New Pioneer Food Co-op also has plans to open before the end of 2014, with a store in Cedar Rapids at the former Fin & Feather, 3338 Center Point Rd. NE.

Mr. Albright said the push isn’t a reaction to the pending opening of The Fresh Market.

Last year, during a press conference to announce the co-op’s choice of Cedar Rapids for its third store, New Pi leaders said the location would open in early 2015, if not sooner.

Mr. Albright said the opening date will be announced in coming weeks.

Just blocks from The Fresh Market, preparations are under way for the new Fareway store at 3717 First Ave. SE, in the Town & Country Shopping Center.

Frederick Greiner, president and chief operating officer for the Boone-based stores, said the hoped-for opening date of this fall has been pushed off to the end of January or early February 2015.

Nothing in particular delayed the Cedar Rapids project, Mr. Greiner said, but pointed to logistics in razing buildings at the site, recycling the materials and other aspects of demolition that take time. 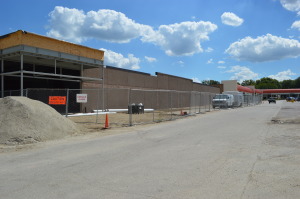 Work is under way for the new Fareway store at 3717 First Ave. SE, in the Town & Country Shopping Center. The store will open just blocks from The Fresh Market’s new store on Collins Road NE in Cedar Rapids. (photo/Cindy Hadish)

The new building, at more than 30,000-square-feet, will include a fresh bakery, full-service meat department, farm-fresh produce and low, competitive prices, he said.

Mr. Greiner said the store isn’t in a race to compete with the other area groceries and noted that Fareway has been in the Cedar Rapids area for 18 years.

“People already know us,” he said. “We seem to develop our own niche and it works for us.”

If nothing else, the three new stores might be in competition for employees.

Job interviews will be conducted later this year, with employment opportunities to be posted at www.fareway.com.

The Fresh Market, which operates 160 stores in 26 states, has already hired many of its 90 workers that each store employs, Mr. Martinez noted, with available positions listed at careers.thefreshmarket.com.

“We have been really pleased with the fantastic employees we have hired from the Cedar Rapids community,” he stated in an email.

New Pioneer recently announced the hiring of Matt Steigerwald, executive chef and owner of the former Lincoln Cafe in Mount Vernon, to lead its prepared foods team in Cedar Rapids.

After operating the cafe for 12 years, Steigerwald sold the local favorite to Rachel Sauter, who reopened it this year as the Palisades Cafe, while he turned his attentions to the nearby Lincoln Wine Bar, now under new management by longtime barkeep Jesse Sauerbrei.

“We’re really excited to have him on the team,” he said. “We thought Matt would be perfect to make this a destination place to eat, as well as a grocery store.” 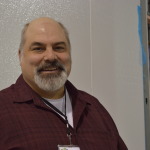 About 30 people work at New Pioneer’s new North Liberty bakery, The Hub, which opened three months ago. Deli staples and more are made at that site, Mr. Albright said, while cookies, breakfast pastries, muffins, scones and other items will be baked fresh at the Cedar Rapids store.

New Pioneer has its key Cedar Rapids leaders in place, Mr. Albright added, and will hire a total of about 50 staff for the 14,400-square-foot site. Job announcements will be made on its website: www.newpi.coop

The store runs above the industry standard in hiring full-time workers with benefits, he noted.

A prepared foods section, with dine-in seating, is taking shape at the new site, with wall installation under way last week.

The building will offer numerous energy-efficient and environmentally friendly features, such as LED lighting in the interior and a bioswale in the parking lot, which uses native vegetation to collect and filter storm water runoff.

As it does at its two locations in Iowa City and Coralville, New Pioneer will focus on buying fresh produce from local growers. The Fresh Market also offers local foods, but neither Mr. Albright nor Mr. Martinez see that as cause for concern.

“We have a distinctive concept that rarely competes directly with other food retailers,” Mr. Martinez said via email.

“We don’t view it as competition,” he said. “We’re happy that there’s a bigger focus on local and organic foods. It will be nice for Cedar Rapids to have more options.” 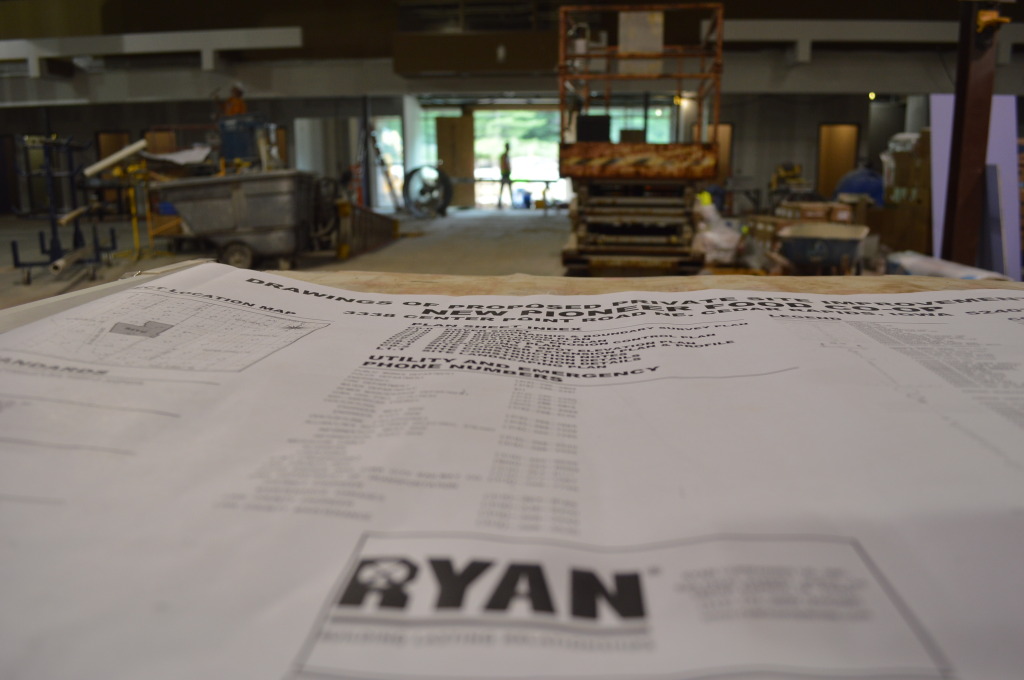 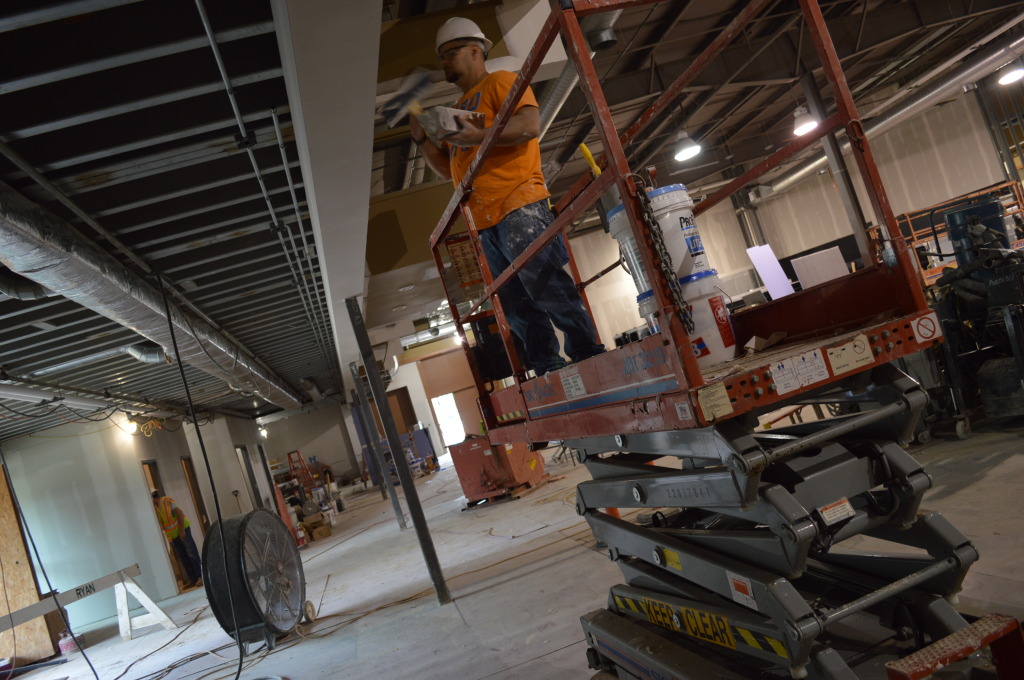 Painting is under way on the interior of the New Pioneer Food Co-op’s new store at 3338 Center Point Rd. NE in Cedar Rapids. The store is expected to open by the end of the year. (photo/Cindy Hadish) 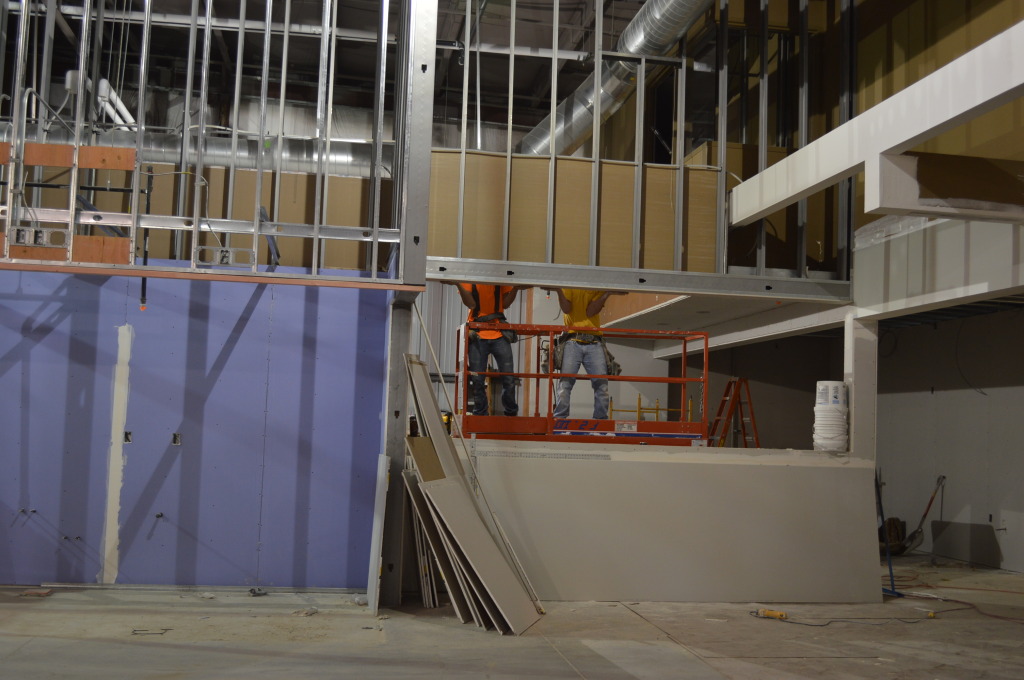