Two out; one Iowan survives on American Idol 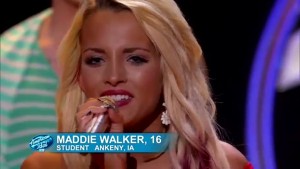 Two American Idol contestants with Iowa connections are out, with one Iowan making the cut into the Top 24.

On tonight’s broadcast, Ankeny 16-year-old Maddie Walker was shown the door after she performed with the top 48.

Up against Rachel Hallack, who sings “Son of a Preacher Man,” Maddie offers her version of “Red High Heels” and the judges give her the “1 percent” edge and reverse their decision, saying Maddie is “ready for prime time.”

Unfortunately, Gabby Zonneveld, who made it through group rounds, was cut during the last round of Hollywood Week. Gabby’s father is Dick Zonneveld, a graduate of Cedar Rapids Washington High School.

Not sure at what point Washington H.S. senior Aaron Bissell was cut, but all of these young adults have made a good showing for Iowa on Idol.

See past videos of their performances here.