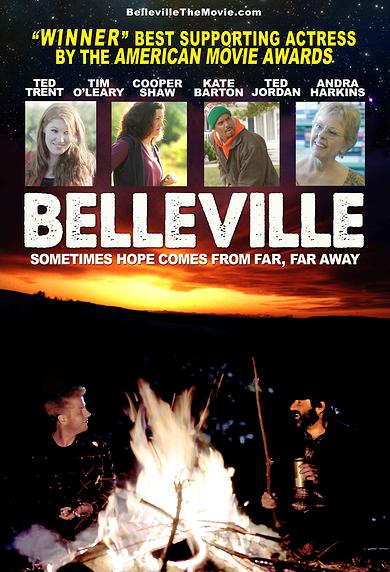 CEDAR RAPIDS – Opening night – and the day after – for a Midwestern-shot movie will coincide with open auditions for another new film.

Ted Trent Studios and Circa 87 will hold open call auditions for their new movie shooting in the Midwest next summer at 13 Wehrenberg Theatres, including the Galaxy 16, 5340 Council St. NE, in Cedar Rapids.

The new film, which is still untitled, will center on the theme of sports. The auditions will take place during the first two nights of the run of Belleville, the locally-shot movie about a farmer and his friendship with an out-of-this-world stranger.

“We are so excited to find more talent in the Midwest,” says Ted Trent, the star and producer of Belleville. “We anticipate lots of people showing up to share with us their passion for sports, acting, or fulfilling a lifelong dream to be in a movie. Yes, I said sports!”

“We look forward to seeing people of all shapes, sizes, ages, and races,” says director Dan Steadman. “This will be fun for the community, and a terrific opportunity for my team to scout new talent for next year’s movie.”

The auditions will happen simultaneously, with casting directors on hand in all 13 cities Friday, September 5, from 4 to 7 p.m. and Saturday, September 6, from noon to 4 p.m.

Participants need not be professional actors. This event is open to anyone in the community, of any age, who would like to talk about his or her love of sports – or perform a monologue of their choice.

“You can tell an interesting or funny story about playing a sport or simply make up something to share about the subject,” says Trent. “You might even want to tell us how you aren’t good at sports. Remember, it’s acting!” adds Trent.

Participants are asked to limit their auditions to 2-3 minutes in time. Auditions will be held largely on a first- come, first-seen basis. However, priority may be given (at the casting director’s discretion) to people who have a ticket for the film Belleville. “We wouldn’t want anyone to miss their audition, or the movie,” explains Steadman. “The only way we get to make another movie next year is if the community really turns out to see Belleville.”

The producers and Wehrenberg Theatres are offering “Buy One, Get One Free” coupons to Belleville good for all screenings except for Friday and Saturday evenings. Coupons are available at the box office or at //www.BellevilleTheMovie.com

Ted Trent Studios and Circa 87, two Los Angeles-based film production companies, are collaborating to focus future projects on America’s Midwest. “It makes sense,” says producer and actor Ted Trent. “Writer/director Dan Steadman grew up in Michigan, and I was raised in Southern Illinois. We started sharing our vision for telling important stories from the Heartland in modern, contemporary ways and that led to a change in focus for both of our companies.”

The duo was in Palm Springs, launching Hidden Hills, an early 60s homage to Rock Hudson and Doris Day, at the Palm Springs International Film Festival. “I got to talking about my upbringing in Belleville, Illinois,” explains Trent. “I challenged Dan to go back to my hometown and write a fictional tale of loss and hopelessness – that eventually leads to redemption and joy that can be found in community.”

“The fun for me as a writer was to take my comedy background (Jimmy Kimmel Live!, Jesus People) and mix it with my Midwestern values and my desire to tell stories that matter,” explains Steadman. The team got excited about bringing filmmaking to the Midwest and discovering local actors in the Heartland.

Belleville did just that for St. Louis actress Cooper Shaw, who just discovered she had won the American Movie Award for Best Supporting Actress in this Midwestern-made indie film.   A full scale publicity campaign was launched in St. Louis, with two articles in the St. Louis Post Dispatch, radio interviews, in-studio TV interviews on CBS and FOX affiliates, and live red carpet coverage on NBC. “The excitement in the room was palpable from the moment guests entered the historic Lincoln Theater, all the way through to the end credits,” writes Bethany Rose in InFlux magazine. “It’s no surprise that a large round of applause accompanied the film’s end.”

Ronald P. Krueger, Chairman and CEO of Wehrenberg Theatres, said, “Our family and our business grew up in St. Louis and the Metro-area.  A film of this quality which highlights local communities and talent is something we strongly support.  We’re proud to showcase Belleville to our guests.  We know they’ll support these local filmmakers.”