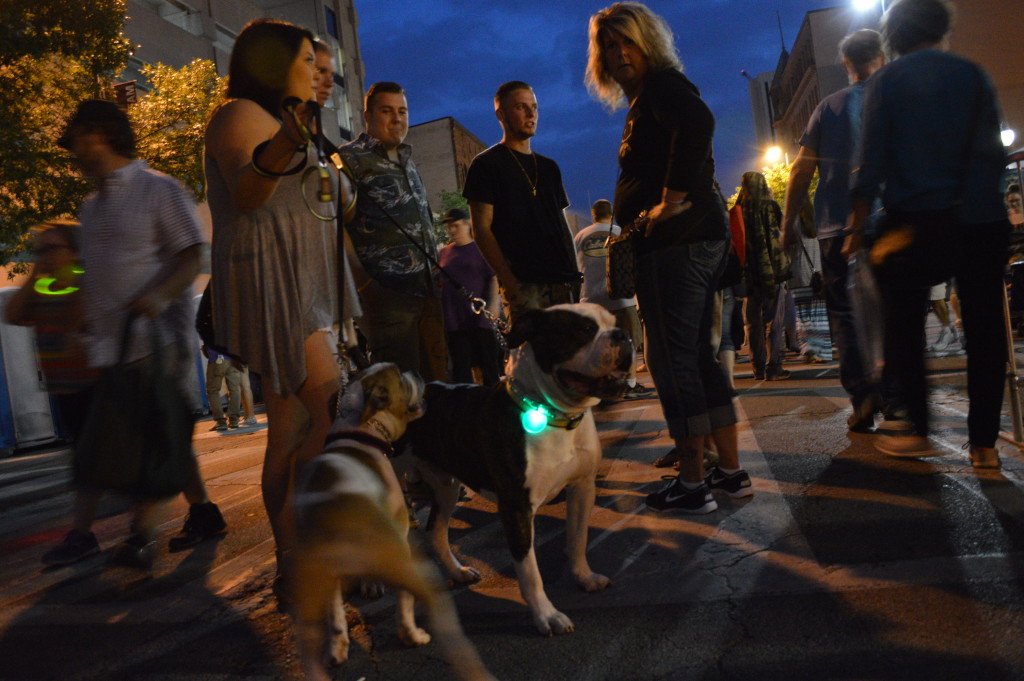 Rules are spelled out to prohibit bringing dogs to Market After Dark this year in downtown Cedar Rapids, Iowa.  (photo/Cindy Hadish)

CEDAR RAPIDS – Market After Dark, the night version of the Downtown Farmers Market, is prohibiting pets at its upcoming event this weekend, although service animals are allowed.

During the nighttime market’s first two years, some customers brought dogs, as they are allowed during the regular daytime Downtown Farmers Markets, but Ellen Bardsley, communications manager for the Cedar Rapids Metro Economic Alliance, which hosts the markets, said the “no dogs” policy has been in place all three years.

The rule has been divisive, with some arguing that, if strollers are allowed, pet owners should be able to bring their animals. Others say dogs should never be allowed at farmers markets.

Market After Dark will be 6:30 to 11 p.m. Saturday, Aug. 26, 2017, from Second to Fifth Street and Second Avenue to Third Avenue SE in downtown Cedar Rapids.

Find details on the event here and read on for some of the Facebook comments about the pets policy:

“If I can’t bring my dog, children and strollers shouldn’t be allowed. I get bumped into and tripped by those more than dogs. Parents with strollers often don’t pay attention.”

“The pavement gets SO hot and can injure the pads on their feet. If I am hot at the market I can only imagine how uncomfortable a poor dog is. And more often than not it is very warm during the markets. I would never take my dogs to one because I am concerned about their safety. If you wouldn’t walk around barefoot on the hot pavement why would you make your dog? There is food served at the farmers market. It should be under the same health code as any restaurant with the obvious exception of service dogs.”

“I think there should be no dogs allowed ALL the time. A Farmers’ Market is not an appropriate place for them to be.”

“A responsible owner should be picking up after their dog, if you see someone not cleaning up say something. My dogs are my kids and are well trained they shouldn’t have to stay home just because of rule breakers. So I agree… if dogs shouldn’t be allowed either should children or strollers they get in the way, drop food that we step and some parents do not pay attention to their kids. The farmers market is a family event dogs and cats (I saw a cat come a couple weekends ago) are family, if you don’t like animals the way other people do maybe you shouldn’t come.”

“If kids and strollers are allowed all family should be allowed, four leggers included!”

“I’ve had more children and strollers run into me than I ever have dogs. Dogs are on a short lead it’s not like they are on a 10 foot leash.”

“I would love it if dogs were banned ALL the time. The daytime farmers markets are so crowded and dogs add to the congestion, many times because people want to stop and pet them. The great congestion is often a deterrent to the market. I am often afraid I will step on the dogs. There are plenty of parks to walk your dogs- the market is not a good place for that. I have also seen dogs going toward other dogs. This poses a hazard to people who may run into or trip on leashes. The strollers are a pain also but people cannot leave their children home alone, dogs can be.”

What do you think? Should dogs (or other pets) be allowed at farmers markets? 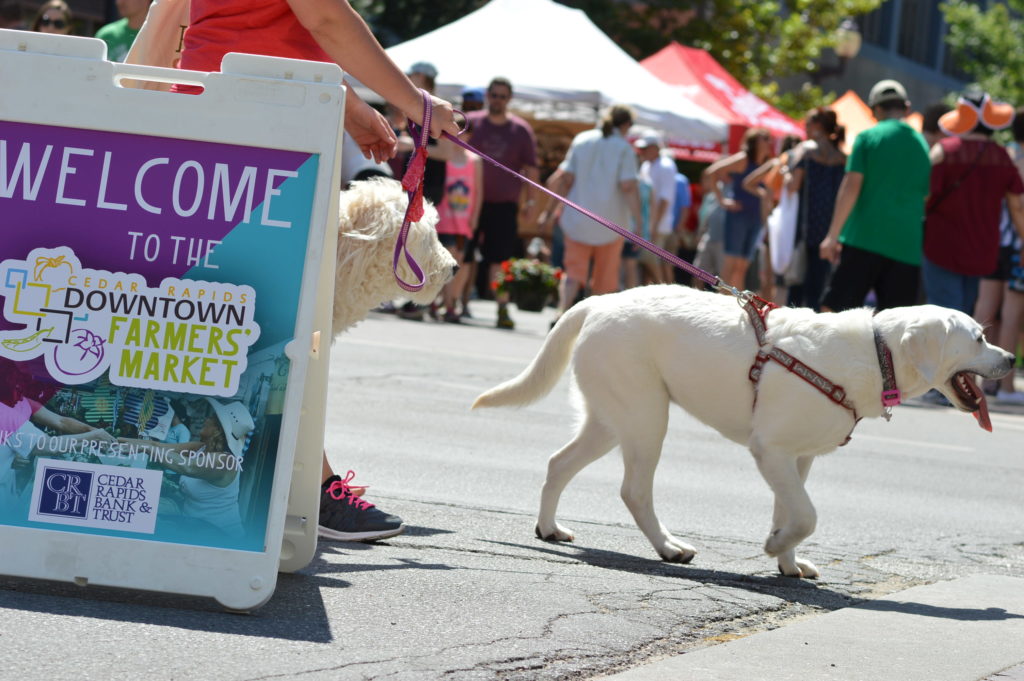 Dogs, strollers and people file through the streets of downtown Cedar Rapids during the first Downtown Farmers Market of the season on Saturday, June 3, 2017. (photo/Cindy Hadish)