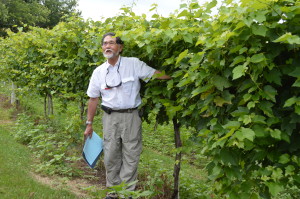 Horticulture Professor Paul Domoto of Iowa State University describes the vigor of Minnesota 1200, one of the grape selections under study in Iowa, during a field day at Tabor Home Vineyards and Winery on Sunday, Aug. 11, 2013. (photo/Cindy Hadish)

BALDWIN – The ultimate performance of new cold-hardy grapes under study in Iowa remains to be seen, but one is a standout to the owner of Tabor Home Vineyards and Winery.

Paul Tabor, who also serves as winemaker for the family-owned business near the Eastern Iowa town of Baldwin, pointed to the Minnesota 1220 selection as one to watch.

“That’s the one I’m keeping my eye on,” Tabor said of the white wine grape. “The potential for that grape is very high.”

More than 20 growers were able to see the progress of the trial during a field day Aug. 11 for the multi-state evaluation of wine grape cultivars.

Tabor Home is the only commercial vineyard in Iowa to participate in the long-term research program, directed by the Iowa State University Horticulture Department. The ISU Horticulture Research Station also participates in the trial.

High humidity, extreme cold and a short growing season are among the challenges faced by grape-growers in Iowa. Evaluating new wine cultivars is important to expand the varieties that the burgeoning industry can grow here.

“We’re looking for superior grapes to what we have, and more diversity,” Tabor said. “It’s invaluable for the growers’ decisions for their next step.” 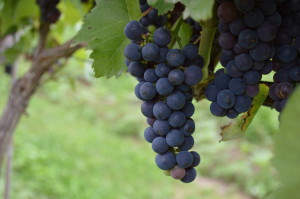 Marquette grapes grow in a trial vineyard at Tabor Home Vineyards and Winery near Baldwin, Iowa. Marquette is among the grapes under study in a trial directed by Iowa State University. Tabor is the only commercial vineyard in Iowa participating in the trial. (photo/Cindy Hadish)

Horticulture professor Paul Domoto led growers through the Tabor trial vineyard Sunday to describe current progress of the grapes planted in 2008 and 2009.

Domoto noted that the New York selection, for example, appears cold-hardy, but is susceptible to Roundup damage.

Another New York variety, 95.0300.01, a white wine type, is growing at Tabor even though it was not intended to be part of the trial, he said.

“It was sent to us by accident,” Domoto said. “But it’s serendipitous because it’s cold-hardy.”

The white wine produced from that grape was among eight that growers were able to taste during the field day.

Barb and Terry McAbee of Pleasant Creek Vineyards have about 2 1/2 acres in production near Shellsburg and sell their grapes to Tabor.

“We’re here to learn about new grapes to try,” Barb McAbee said, adding that her husband is interested in Petit Ami, a white wine grape with muscat flavors.

Domoto said the trial will continue at least through 2017.

“It’s very important,” he said of the work under way at Tabor, including the wine-tasting. “It gives growers the opportunity to see the potential.”